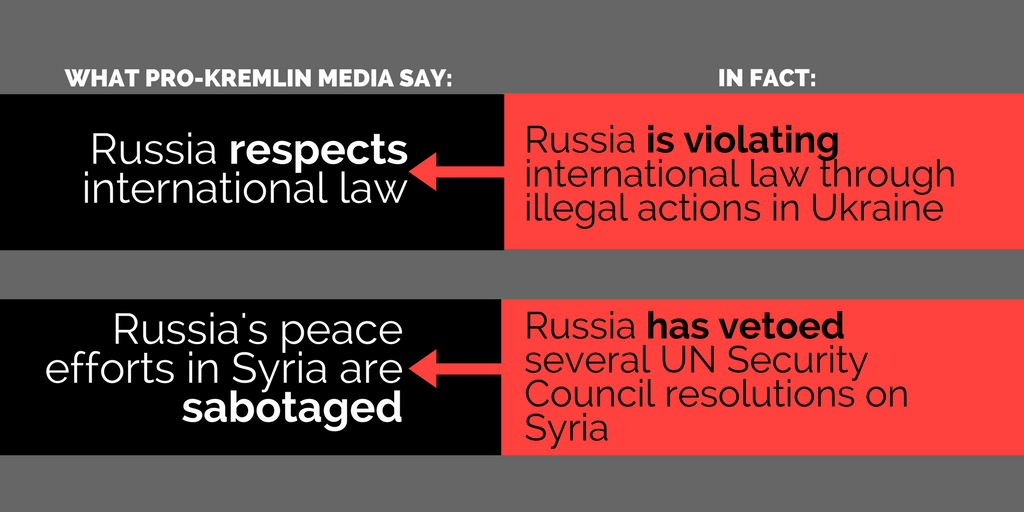 If last week the focus was on the evil West, then this week we saw that narrative embellished with repeated messaging about how good Russia is. These two overarching narratives describing the pro-Kremlin world are often used together: Russia is good, the West is evil.

So, on Russian state TV, we were told by the Deputy Chairman of the State Duma that Russia respects international law, that it is friendly towards its neighbours, and that it is those neighbours who are the aggressive ones, not Russia. To be fair, it was said in the same show that Russia might have to strike Europe pre-emptively if NATO keep putting troops into the Baltic countries. But no mention was made of Russia violating international law through its illegal actions in Ukraine, annexing Crimea among other things.

In the same show, it was stated that Donbass is part of Russia and that it is being bombed by European troops on a daily basis. Of course, no evidence was presented for these European troops – there are none.
A whole show on Russian state TV was devoted to the situation in Donbass, in fact. It was claimed that the current Ukrainian government aims to drown the country in blood – repeating the reoccurring myth that Ukraine is waging a war on its own population, rather than defending itself. On another TV show, there was speculation that the EU will eventually ask Russia to restore order in Donbass and subsequently in Kiev. It was also claimed that the European observers who observed the elections in Ukraine after the fall of Yanukovic took substantial bribes in order to recognize the results of the election. As usual, no evidence was presented. It was the OSCE that observed the elections in Ukraine. Russia is a member.

In another pro-Kremlin outlet, we learnt that Moscow’s peace efforts have been continuously sabotaged, with both Ukraine and Syria named as places where Russia has been hindered from achieving peace. No mention of Russia’s involvement in the escalation of both named conflicts, nor of the fact that Russia has vetoed several Security Council resolutions on the issue of Syria.

The Baltic states took some beating as well, as they were accused of endangering global peace through reproducing a conflict with Russia. Estonia, Latvia, Lithuania and Ukraine were all again described as being part of ‘the Russian world’.

Sweden was again singled out and presented as a particularly unsafe place to live in, despite plenty of evidence showing the opposite. In a Czech outlet, the recent influx of migrants was blamed for an alleged massive increase in crime in the country. However, crime statistics analysed over the period in question (October 2015-January 2016) show that refugees account for 1% of crimes during that period. And the Swedish National Council for Crime Prevention’s Swedish Crime Survey concludes that there has in fact been a 2% decrease in crime over the last 10 years.

In a Hungarian pro-Kremlin outlet, Swedish statistics concerning rape were used to portray the country as especially unsafe for women, while not mentioning that the legal definition has been recently broadened to include offenses that in other countries would not count as rape. In the same outlet, a recent riot in a suburb of Stockholm was blamed on ‘unknown migrants’. While the riot did indeed happen, no one has been arrested and the police do not know who was involved. It goes without saying then, that the culprits’ ethnicity is also unknown.