Hannah Arendt and the Fragility of Facts 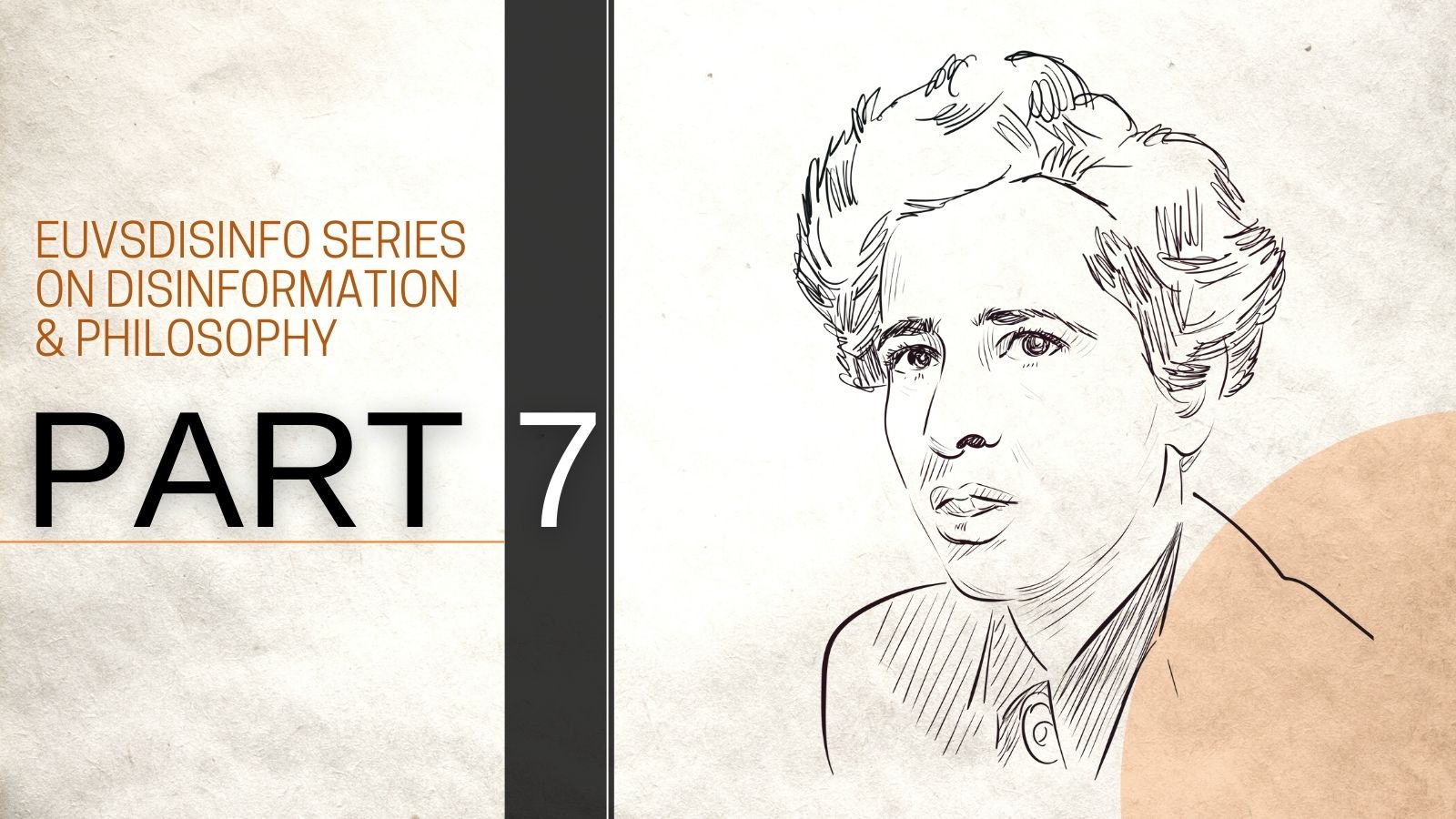 These days, most people intuitively grasp that loneliness creates mental health challenges. As COVID-19 had forced societies into lockdowns, many realised we humans are mammals, too. Alone, we suffer.

A study by Princeton University shows that people are also more likely to believe disinformation when they feel excluded. Furthermore, loneliness is how some experts explain why older people are prone to share disinformation.

Hannah Arendt, one of the most original thinkers of the 20th century, first suggested how loneliness fuels political extremism. Personally, she had experienced her share of both.

In 1933, as a young Jew, she had to flee Germany. After World War II, she wrote extensively on why lies, populism, and, eventually, totalitarianism were able to rise.

In her classic book The Origins of Totalitarianism, Arendt argues that totalitarianism was historically something new. It “differs essentially from other forms of political oppression” (think despotism, tyranny and dictatorship) as it applies terror to subjugate mass populations rather than just political adversaries. At the end of her book, she focuses on what seems to be a remarkable factor of its success: loneliness.

Down and Out in Berlin

Everyone knows the story. The New York stock market crashed in 1929, hitting the global economy and Germany mercilessly. As a consequence, trade and the economy were in tatters, with brutal unemployment and a fragmenting society. Even before the crash, the country was scrambling after the First World War, yet the economic boom of the roaring twenties had made some very rich. The perfect conditions for the rise of “mass man”, who feels abandoned, isolated and redundant: lonely.

For Arendt, loneliness is not primarily the lack of social interaction with other people, but rather the lack of self-identity, which is a product of being together, being part of a community: “The experience of not belonging to the world at all” hinders the capacity for forming an identity, leaving space for terror and a totalitarianism. The ideal subject of totalitarian rule is not someone with ideological convictions, “but people for whom the distinction between fact and fiction… and the distinction between true and false… no longer exist.”

A Speaker of Truth Has no Friends

As Arendt experienced herself, speaking the truth in public debate can also be lonely. She thought she documented her experience and shared her views in writing about the Eichmann trial. However, in return she personally received blame. Nevertheless, this experience, though painful, emboldened her to take up the pen against lying in politics. According to Arendt, if one accepts lying or denying someone the space to form their opinion or their experience of reality, it could destroy the common fibre of humanity – the world we together construct. 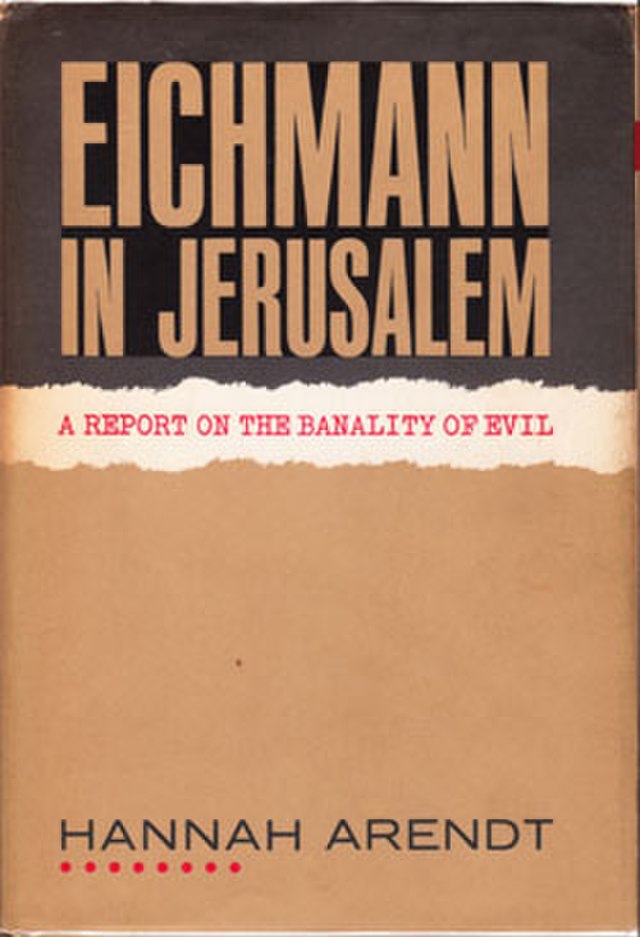 The Inflation of Facts

Her 1967 essay, Truth and Politics, recognises that in modern times, truth is no longer seen as something that is a given, waiting to be discovered by man; instead, it is produced by the mind. Arendt discerns different degrees of truths: mathematical truths, scientific truths, philosophical truths and facts.

Facts and events are what Arendt calls “factual truth” and they are the product of a community living and acting together. Facts and events are documented in collective memory and history as the collective narratives and traditions challenged or upheld. Their function? To serve as common ground to stand on, giving every person the opportunity to their experiences and create meaning. However, the difficulty with facts is that compared to math, science and philosophy they are more fragile, as Arendt writes:

“Facts and events are infinitely more fragile things than axioms, discoveries, theories – even the most wildly speculative ones – produced by the human mind; they occur in the field of the ever-changing affairs of men, in whose flux there is nothing more permanent than the admittedly relative permanence of the human mind’s structure. Once they are lost, no rational effort will ever bring them back.”

Facts, according to Arendt, are always in danger from politics, as politics is not primarily concerned with truth but with action. However, beyond normal political practice, and more dangerously, looms what Arendt calls “organised lying”. Organised liars aim not just to replace a part of the truth with a falsehood. Actually, they go further, as they want to undermine the factual fabric of reality. In less philosophical terms, “to flood the zone with shit” (in the words of Steve Bannon).

Through organised lying, facts are gradually downgraded to mere matters of opinion. Reading Arendt, it becomes even clearer how the current concept of “alternative facts” is instrumental to achieve inflation of facts.

The many instances of revisionist disinformation we have spotted underscore this. Just look for example at narratives on WW II, the Katyn massacre, or false stories on the NATO promise to never “expand” eastwards.

Even Putin himself has shown remarkable interest in rewriting history and published several papers that distort history. For example, one blaming Poland for the outbreak of WWII, another claiming the historic unity of Russia and Ukraine, and yet another one on American hunger for power leading to the eastern “expansion” of NATO and the unconstitutional coup in Ukraine.

According to Arendt, once disinformation from those in power succeeds, it gives the organised liar three abilities. First, to say things and then claim they never did. Second, to rewrite history in order to serve their interests. Third, to call specific groups (minorities, political rivals) a threat, without the need to back it up by evidence. As the fragility of factual truth is not something that can ever be remedied permanently, modern democracies have to live with this inherent insecurity.

All this speaks to the enormous importance of public institutions such as libraries, museums, universities, courts and newspapers. These are places where facts are conserved and the public record is maintained. Without them, we would lose an important pillar protecting factual truth.

The Advantage of the Lie

Why do lies have an impact in the public space? One answer is that it is because truth is often unclear, unstable. People prefer stories that remove their uncertainty. When COVID-19 struck the world a year ago, as people fear change, some really wanted to believe this was nothing serious. Disinformation actors exploited this. In the same period, other narratives did acknowledge the dangers, but subsequently explained them in terms of already existing beliefs; like the threat from global elites, evil billionaires, or China.

Hannah Arendt explained this phenomenon in 1971 in another topical essay, Lying in Politics:

“It is this fragility that makes deception so very easy up to a point, and so tempting. It never comes into a conflict with reason, because things could indeed have been as the liar maintains they were. Lies are often much more plausible, more appealing to reason, than reality, since the liar has the great advantage of knowing beforehand what the audience wishes or expects to hear. He has prepared his story for public consumption with a careful eye to making it credible, whereas reality has the disconcerting habit of confronting us with the unexpected, for which we were not prepared.”

When it comes to the dangers of disinformation for society, Hannah Arendt is still an absolute authority. She recognised that loneliness makes people susceptible to disinformation and extremism and she explained why facts are so fragile and people prone to buy lies. 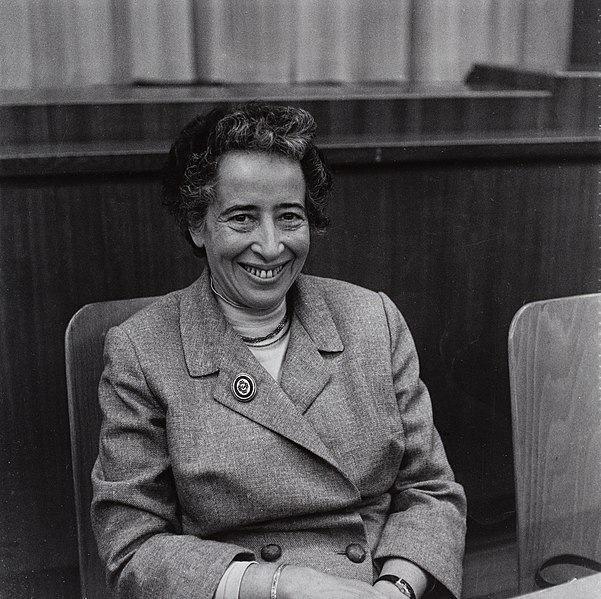