Heidegger and the Age of the World View 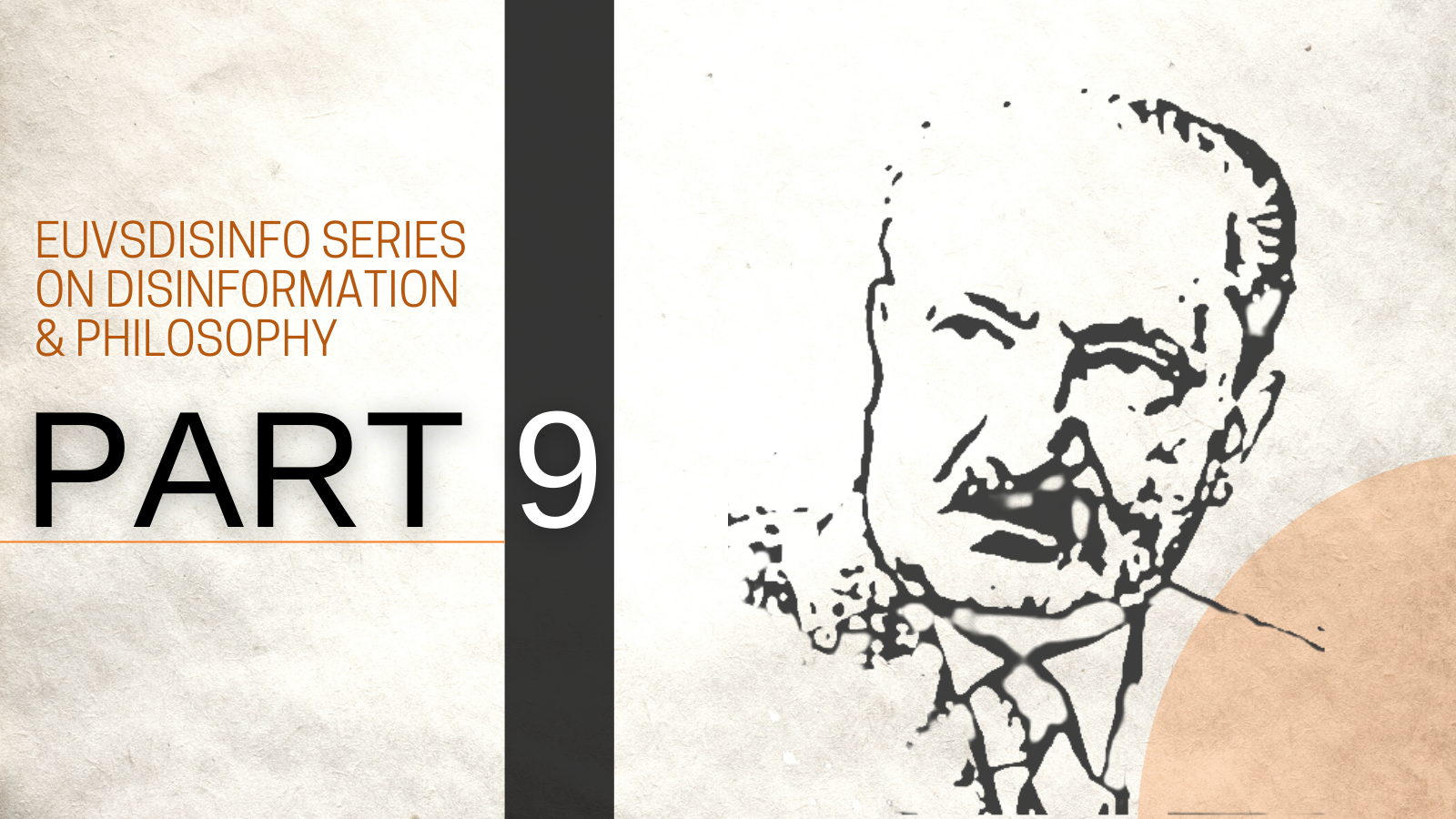 Last summer, EUvsDisinfo spotted a case that claimed “liberalism is cancelling Western culture”, calling it symptomatic of “incipient totalitarianism” when the ideas of great philosophers are suppressed. This case calls to mind a typical metanarrative, impossible to falsify, suggesting Western culture has cut itself off from its roots. Similar cases predict that Europe will collapse, unless Russia comes to its rescue. Surely, one cannot falsify that liberalism is cancelling Western culture. However, it is certain that three of the five thinkers whose ideas were allegedly suppressed, have already been discussed in our series on disinformation and philosophy (Plato, Aristotle, Nietzsche).

Today, we will focus on a fourth in the list; Heidegger, a major figure in philosophy, who himself lambasted Western culture. From Plato to Descartes, he perceived that Western thinking often equates knowledge with control. He warned that scientific, or technical, thinking has its limits and argued how, paradoxically, scientific rigor could lead to subjectivism (and disinformation).

Heidegger dedicated his magnum opus, Time and Being (Sein und Zeit), to his teacher Edmund Husserl. This philosopher and mathematician wanted to renew philosophy. In Husserl’s view, very crudely, the power of ideas hindered access to the things themselves, or phenomena. His philosophical project aimed to facilitate a return to the phenomena, which, in time, led to the (current-day) movement of “phenomenology”. The study concerned itself with the appearances of things, or things as they appear in our experience.

In order to renew philosophy, Husserl swept aside Descartes’s work. As some might know, the Frenchman created a new fundament of philosophy, no longer depending on God, the almighty creator, but the human subject, imagining the world. The problem of Descartes, however, was this subject, or consciousness, was closed. How do we know the outside world corresponds to our thinking?

Husserl settles this. Although, being a true philosopher, he did not provide an answer. Instead, Husserl argues the question is based on wrong assumptions, as consciousness is not closed, but intentional. Experience is directed towards things in the outside world. To be conscious, always means to be conscious of something. The new question becomes; how do we know there even is an inside?

Heidegger radicalises Husserl’s idea. He not only applies it to the field of knowledge, but also to existence itself. Before Heidegger, for Kant, Descartes, and even Husserl, the question was: what can I know? Heidegger goes beyond knowing. For him, it is bizarre to state: I think, therefore I am. Rather, it is the other way round; I am, and thinking is just one of the modes of being.

To free himself from the connotations connected with old terms such as consciousness, humans, soul, Heidegger introduces a new notion to designate the being we are ourselves, or human experience: there-being (Dasein). It refers to a certain “openness”; a pre-intellectual attitude to Being that is required for us to encounter beings as beings in specific ways (practically, theoretically, aesthetically). In dramatic terms: you cannot love another being, if you do not know you are a being too.

Heidegger famously explains how anxiety is an important gateway to self-understanding because anxiety confronts us with our end, with nothingness. If we allow this painful confrontation to happen, we can find an authentic answer to this inescapable deficit of being.

The Age of the World View

According to Heidegger, the problem with modern culture is that it makes us forget that life is finite. In blunt terms, if we forget we are dying, we ignore the totality of being (Seinsvergessenheit). Heidegger creatively questions concepts we use every day, to demonstrate we normally overlook this.

“World View” is one such concept. In his 1938 text Age of the World View (Zeit des Weltbildes), he questions modern times, modern culture and the way we value information. This has implications for our thinking on disinformation.

In short, Heidegger characterises the modern age as dominated and defined by science—whose model is experimental science: “the fundamental event of the modern age is the conquest of the world as picture”.

What does this mean? According to Heidegger, this conquest again originated with Descartes, who proposed that man is a subject looking at a separated object (the world). The results of this looking: a picture, or view, of the world. The wording of world view implies a viewpoint in opposition to the world. According to Heidegger however, this is never possible, as man looks at the world, yet at the same time is part of it. What we think we do with our scientific method, is leave behind our subjective viewpoint, in order to understand the world, and then return in our subjectivity with the world view we have gained. 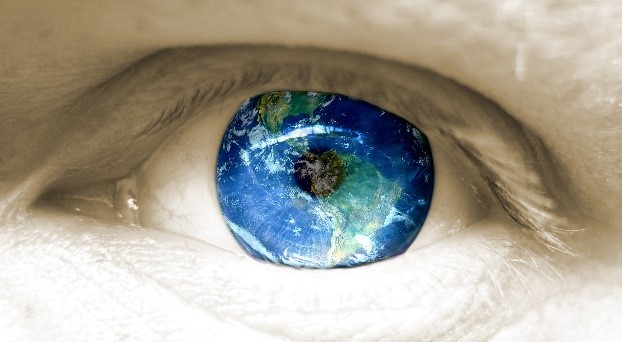 Heidegger’s line of thinking provides a few questions on disinformation.

First, in line with spreaders of disinformation, who sometimes use Heidegger to justify their ignoring the evidence, we could ask: is Heidegger against science or technology? This is definitely not the case. Heidegger does not oppose science but objects to the elevation of research results to absolute truths, in other words, scientism.

Second, Heidegger in his thinking often turns things upside-down, forcing one to look in the mirror. Perhaps, our fear of disinformation also shows how much we care about information. Perhaps, we are a bit addicted to it even, like junk food. Just, think about the growth in the amount of data that is stored. Information technology, as the logistics of information, gave disinformation momentum; therefore, it is unlikely that the problem of disinformation will be solved by technical means. Disinformation is a social problem in the first place, and the less people are willing to listen to each other, and respect each other’s viewpoint, the easier it becomes for disinformation to exploit that. This also means that disinformation is not a phenomenon outside of modernity, but rather a consequence of it.

Third, Heidegger warns how in modernity, our objective methods, paradoxically, can lead to extreme subjectivism. This might sound counterintuitive. Heidegger thinks that if modern man takes scientifically informed views back into his subjective mind, there is a risk of endlessly building views upon views, leading to a situation where the views are completely detached from the reality as was perceived.

This could be compared to the biological concept of “runaway selection”, which originates from peacock feathers. For some time, biologists struggled to explain this phenomenon. How could one reconcile these long extravagant tails, embellished with ornaments, with the harsh process of natural selection? They resolved this with the concept of “runaway selection”: the evolution of exaggerated male ornamentation by persistent, directional female choice.

An example in disinformation is the wide-spread false story that Danes are “zoophiles”, part of a larger moral decline of the West.

“Zoophilia” is a beautiful example of this process in the world of disinformation. A colourful, extravagant story, which seem too unfounded to survive media selection. Nevertheless, sometimes it just runs away. It starts with something small, such as the claim that a Danish zoo was collecting unwanted house pets as food for carnivores, and then, story for story, it’s extravagantly blown out of proportion.

Heidegger is a notoriously complicated scholar. Yet, perhaps, the most important lesson he has to offer is simple. When approaching disinformation, we should bear in mind that individuals targeted with disinformation are Beings. What about a real conversation over a cup of coffee?