High on Its Own Supply 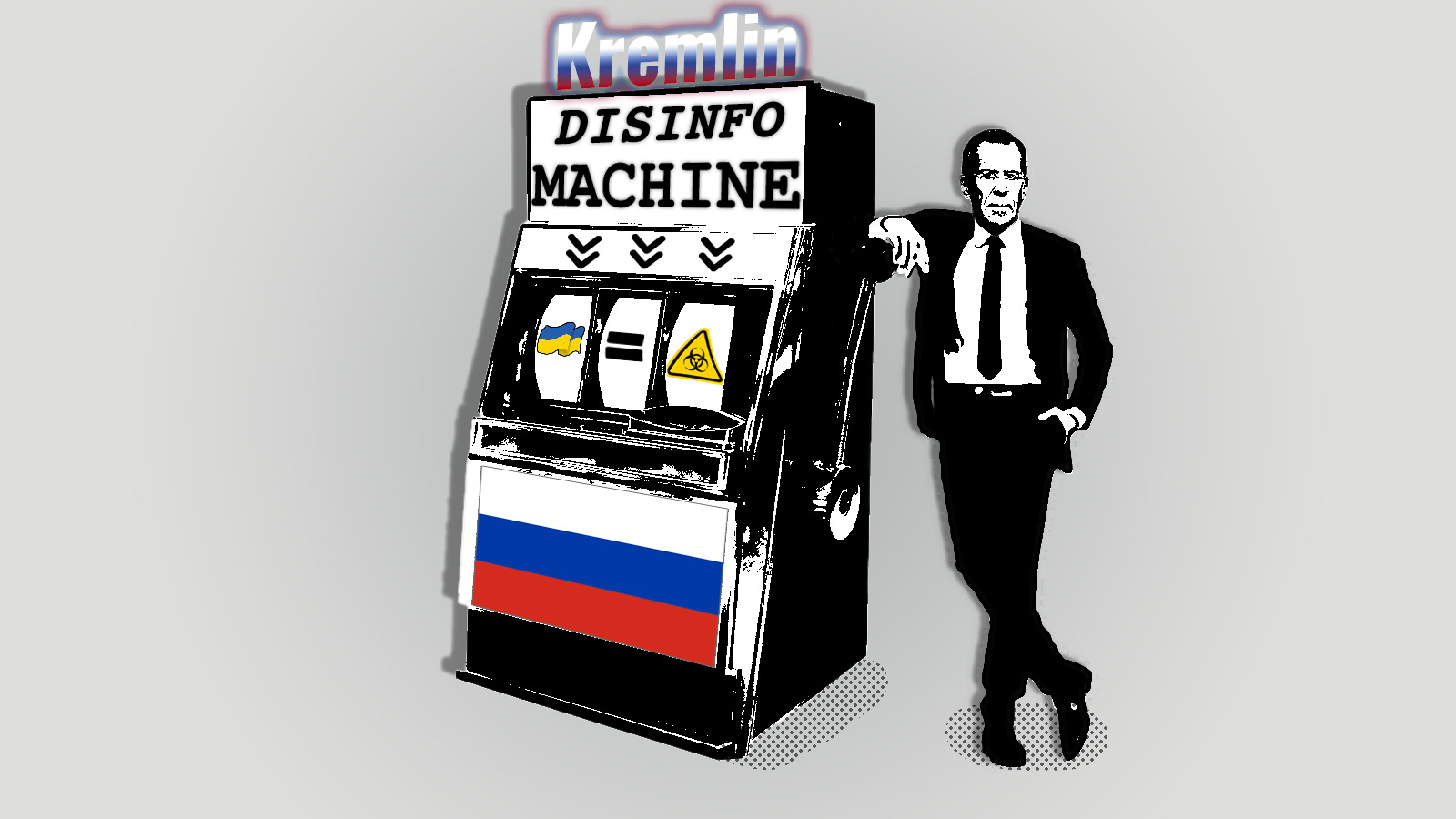 With day 22 of Putin’s three-day war not yielding the results the Kremlin hoped for, the Kremlin’s propaganda apparatus has now shifted into a higher gear and is increasingly focused on reporting on how well the invasion, pardon, the “special operation”, is going. This leads to a rather strange cognitive dissonance, when Russia’s foreign minister Sergei Lavrov publicly announces that Russia “did not attack Ukraine” and falsely claims that there is no war in Ukraine.

Regardless of the Kremlin’s repeated claims that Russia’s “operation” in Ukraine is going as planned, a telling indication of the real state of affairs may be the decision to reinforce the invasion by bringing in foreign fighters from the Middle East. This announcement was quickly supplemented by disinformation claims attempting to discredit Ukraine’s outreach to volunteers, falsely claiming that Russia is fighting the extremists whom Ukraine has brought in to help.

The “shock and awe” tactic has clearly failed, and the Ukrainian spirit of resistance grows more resilient by the day. There is no room for “awe” left, but the Russian military now seems to have doubled down on the “shock”, including by deplorable and morally indefensible attacks on civilian infrastructure. However, the Kremlin’s propagandists have no moral qualms about bombarding hospitals; they keep making claims that Nazis had sought refuge in maternity wards. According to the Kremlin’s narrative it was neo-Nazis from the Azov battalion they were after when ravaging a maternity ward in Mariupol.

Kremlin disinformation often uses the demonisation of the Azov battalion to push the false narrative of Nazis in Ukraine. It has inflated this battalion to outsize proportions, comparing it to an entire army. However, all manifestations of Nazism are banned in Ukraine, and as a pluralistic and democratic society Ukraine has instruments to handle any such challenge.

The Russian state-controlled disinformation outlets also seized the opportunity to advance the disinformation narrative of a “humanitarian crisis” unfolding in Eastern Ukraine when Russian-backed separatist forces in Donetsk shot down a Ukrainian missile, its fragments allegedly killing at least 20 civilians, according to Moscow . This news reverberated widely in the Russian disinformation ecosystem, although the allegation of a “humanitarian crisis” has been well established as a Kremlin tactic to justify the invasion of Ukraine. This stands in stark contrast with the facts on the ground, with Russian forces attacking evacuation routes and exacerbating the real humanitarian crisis that has resulted from the Russian invasion.

Perhaps increasingly feeling the pinch of sweeping Western sanctions, the Russian disinformation apparatus turned its attention to stoking fears of the adverse effects of these sanctions for the West, making claims of deep recession looming just beyond Europe’s horizon. While claims of “consumer apocalypse” and the imminent collapse of the Western financial system were spreading, the Kremlin also continued to perpetuate its go-to retort that Western sanctions have no impact on Russia.

Biolabs conspiracy revival and the power of a blank page

In line with its favoured disinformation tactic of stoking fear, the Kremlin also continued to devote significant attention to advance the disinformation narrative of alleged “biolabs” in Ukraine. This baseless conspiracy theory has been peddled for years, despite the fact that the World Health Organization has stated that “like many other countries, Ukraine has public health laboratories researching how to mitigate the threats of dangerous diseases affecting both animals and humans”. Regardless, beating the Russian disinformation drum about “biolabs” also continued to be quite popular among Chinese state-affiliated media, particularly regarding disinformation narratives about US biological laboratories in Ukraine and in the world.

In an effort of damage control, the Kremlin is increasingly turning its attention not just to the creation of disinformation, but also the other side of the coin – severely limiting access to independent and objective sources of information. Yet, the notorious banning of words such as “war” and “invasion” cannot hide the truth. The Nobel Peace Prize-winning newspaper Novaya Gazeta published two blank pages in lieu of reporting on the war in Ukraine. Evidently, the Russian authorities consider that as a threat to the Orwellian regime being put in place in Russia, and detain protesters holding up blank signs.

But perhaps most devious of all is the Russian authorities-backed drive to discredit legitimate fact-checking efforts by mimicking the style and approach of established fact-checking organisations. The so-called “StopFakes” campaign is being carried out by the social media accounts of Russian diplomatic missions (e.g., in Spain, Russia and the UK). Notoriously, this “campaign” tried to falsely portray the international outrage about Russia’s attack on the maternity ward in Mariupol as “disinformation”. Since the false messages were in clear violation of the platforms policies, Twitter has since deleted the lying tweets from at least some of the Russian diplomatic accounts.

Finally, the Russian authorities also took a significant step toward increasing the information isolation of the Russian population by cutting off access to major social networks such as Facebook and Instagram, as well as labelling Facebook’s parent company Meta an “extremist organisation”. These efforts to throttle the free flow of information on social media risks cutting Russia off completely from any reliable information. In the end, even the Kremlin’s propagandists will be left with no other option but to consume the lies they created to get high on their own supply.