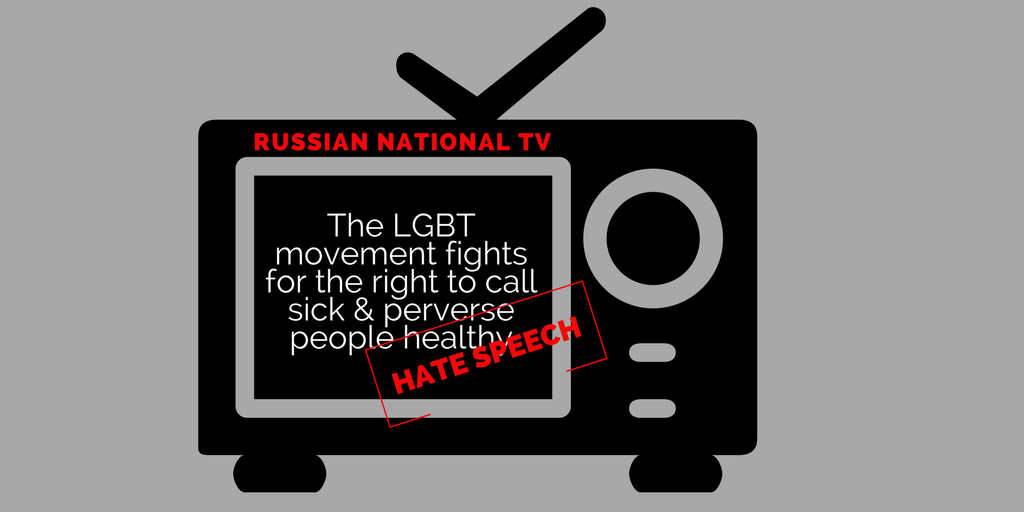 Being gay is a mental disease, and same-sex marriage is not much different from someone marrying your dog. With this kind of messaging, pro-Kremlin media aim to paint an image of Russia as a safe haven for traditional values, in contrast with an image of Europe as a place where liberal values and tolerance have become an existential challenge to society.

The latest example of hate speech directed at LGBT people in Russia was a 50 minute long programme broadcast on 2 March on the Kremlin-loyal national TV channel REN-TV. Here we learn from an expert commentator that “in the West, they fight for the right to call sick and perverse people healthy”. Another expert explains that this is a part of “a war against humanity: humanity loses the ability to reproduce itself”.

It is against the background of this kind of broadcasting that Europe has been labeled “Gay-rope” (“Гейропа”) – a term that has also been used in pro-Kremlin disinformation targeting Ukraine’s choice for the EU, as explained in this analysis from The Coda Story. Similarly, people who cherish liberal values and tolerance are mocked with the Russian terms “liberast” and “tolerast”, rhyming with the negative Russian word for a gay man.

Needless to say, the acceptance of intolerant language and hate speech on national TV leads to echoes in other parts of Russian society. As we have recently shown, a Duma member has called the recent Disney production of “Beauty and the Beast”, (see our report) a “shameless propaganda of sin and perverted sexual relationships” with reference to the infamous Russian law that criminalises “gay propaganda”.

In an earlier broadcast on the same REN-TV, a series with the title “Gay Over” mixed traditional hate speech with conspiracy theories along the following story line: Gay politicians are being installed in Europe. They break children’s psychic and force them to change sex. All this is organised by a business lobby and the world’s billionaires in order to rule the world via corporations. Russian LGBT activists are active because of international grants from Western NGOs, Western embassies and George Soros. The Disinformation Review reported this in February 2017.