'House of Cards,' Or The Tough Workdays Of Russian Trolls 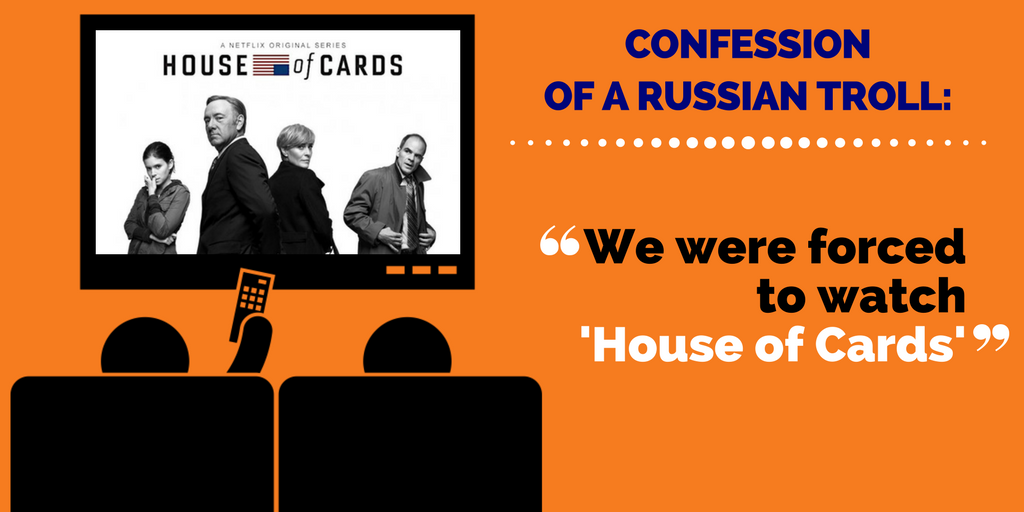 Working in a Russian troll factory may not be that dreary after all. According to a former troll interviewed by Russia’s independent TV Rain station, he and his team were instructed to watch the popular Netflix series House of Cards.

The troll, identified as “Maksim,” said the series – which casts Kevin Spacey as a ruthless U.S. congressman with presidential ambitions — was meant to educate the Russian trolls.

“We were forced to watch ‘House of Cards’ in English,” Maksim told TV Rain.

Maksim worked for the infamous Internet Research Agency, a troll factory in St. Petersburg that used social media to spread disinformation during the 2016 U.S. presidential campaign. The man believed to have bankrolled the agency is Yevgeny Prigozhin, an oligarch close to Vladimir Putin and sanctioned by Washington for financially backing Russia’s military occupation of Ukraine. See the fresh CNN investigation about Prigozhin here.

After their mandatory Netflix training, Maksim says he and his fellow trolls used their new-found expertise in English language to write inflammatory comments on the websites of leading U.S. publications including The New York Times and the Washington Post.

Figure of the Week: 10 million

Inside the “Ministry of Truth”