How Big is the Kremlin's Obsession with Ukraine? Spoiler: Very Big 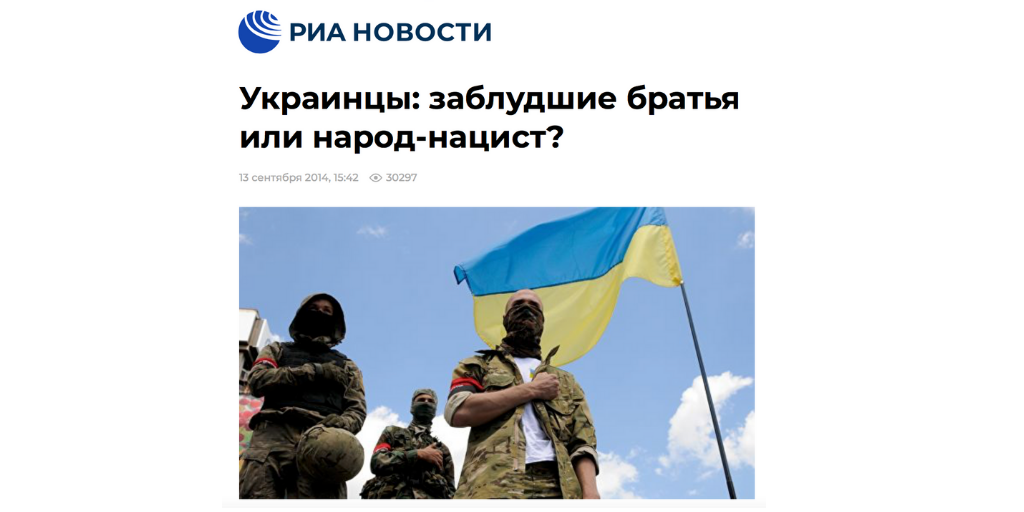 It is old news that Russian state-controlled media outlets have little focus on Russia and that they are almost obsessed with Ukraine.

But just how serious is this fixation with Russia’s neighbour country? And can it be measured?

The state news agency RIA Novosti’s own website turns out to offer quite concrete answers to these questions.

In a discussion on Twitter initiated by Alexey Kovalyov, an editor at Meduza, commenters used the search function on RIA Novosti’s website to quantify the agency’s focus on Ukraine.

It turns out that in 2014 – during the first year of Russia’s war in Ukraine – 29% of all RIA Novosti’s reporting – national and international – contained the key word “Ukraine”; an impressive total of 50,019 individual news items devoted to the country.

Since then, Ukraine’s share in RIA Novosti’s reporting has calmed a bit down; the total number of reports during the last 12 months has been 26,720 stories, or around 12% of all articles published in this period.

The discussion thread was triggered by a statement made on Telegram by Margarita Simonyan, the chief editor of RT, Sputnik and RIA Novosti, in which she said that “Ukraine is becoming interesting again” – even if audiences, according to Ms Simonyan herself, have become “sick and tired” of hearing about Ukraine.

Since the invasion of Crimea and eastern Ukraine in 2014, Russian authorities have been caught in a communication limbo.

On the one hand, Moscow has tried to deny its responsibility, e.g. by claiming that Russian soldiers in Crimea were just “little green men“.

At the same time, as overwhelming proof of Russia’s involvement has surfaced, the authorities have needed to find ways of justifying their aggression. This has been done through denigrating Ukraine as a nation; through systematically misrepresenting events in the country; and e.g. through framing Ukraine’s partnership with the EU as sharing features with Nazi German aggression in the Second World War.

Finally, if the Russian media narrative about Ukraine is not steered with guidance from the Kremlin, more and more Russians could potentially begin to see their neighbour country as a source of inspiration; as a place where, for example, the style of governance is different from what they know in Russia – as was illustrated in a video from last week, which compared president Zelensky’s recent inauguration ceremony with that of his Russian colleague.

This video was produced by the RFE/RL’s Current Time TV.