How pro-Kremlin outlets abuse the tragedy of terror 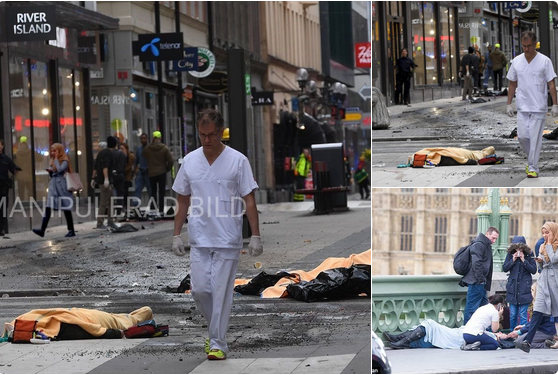 After every terror attack, the reaction is sadly the same. Pro-Kremlin outlets all over Europe start spreading conspiracy theories accusing various European governments, or the EU, or the US of false flag operations. In the upside-down world of disinformation-oriented pseudo-media, it is always someone in the West who is responsible for every tragedy of this kind – except when they claim, perversely, that the tragedy never happened and was in fact only staged by evil western governments trying to manipulate their populations.

The most recent case of this was the terror attack in Sweden. In the days after, manipulated images, false statements and conspiracy theories were spread, claiming that the attack in Stockholm was a false flag operation to hide that the US had attacked a Syrian airbase, or that it was organised by the Swedish Social democrats to ensure that the current Prime Minister would be re-elected as the leader of the party, among other things.

In the course of our Disinformation Review project, we have seen this kind of “reporting” many times. The tactics never change – the aim is to spread conflicting versions of events, sow doubt and mistrust, and create an environment where the average news consumer ends up saying: “There are too many versions of what could have happened, I will never know the truth.”

See below an overview of how various pro-Kremlin outlets (be they websites and blogs in various languages, or even major TV debates on Russian state channels) have covered the terror attacks that have happened in the last 15 months. Not a single item on this list was proven to be true. They are all deliberately spread false information.

Manipulation and misuse of images from terror crime scenes in Stockholm and London. (Image: Twitter/Dagens Nyheter)