How to Make 500 Victims of a Suspected Chemical Attack Disappear?

When you monitor and counter the constant flow of disinformation, even the wildest made-up stories hardly surprise you after time. But sometimes it really manages to get under your skin.

How would you measure the level of cynicism of the following statement on Russian TV?

“The Syria [chlorine] chemical attack footage is a fake. Maybe naked and wet kids are shivering because it is cold. Some of the kids are maybe unconscious, or maybe they are just sleeping. It is good if the photos of the victims are just staged and people did not get killed for the footage. NGO Swedish Doctors has accused the White Helmets of killing children for a realistic picture.” 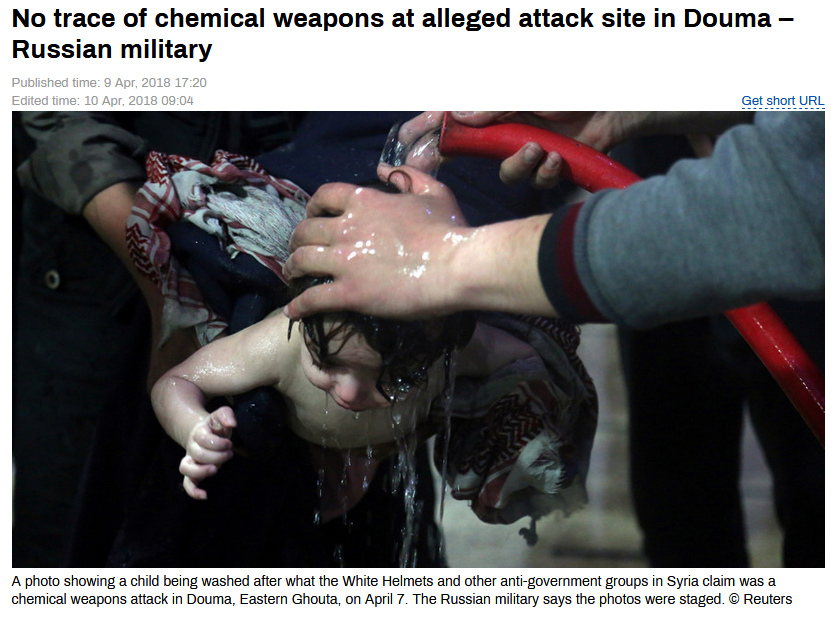 RT published photos of the victims of the latest attack in Syria and framed them staged.

Immediately after the reports of a suspected chemical attack in Syrian Douma appeared, Russia reignited its disinformation campaign on the use of chemical weapons in Syria. This time, the efforts focused on three main lines:

1. The footage of suffering victims has been staged by the White Helmets (Russian Ministry of Defence),
2. The chemical attack is a fabricated story in general (Russian Ministry of Foreign Affairs)
3. The aim is to distract the public from the lack of clarity over the Salisbury attack (Russia’s Permanent Representative to the UN)

These messages were then picked up by media spreading pro-Kremlin disinformation.

Whereas past Russian disinformation over chemical attacks sought to accuse “anti-Assad terrorists” – see for example the earlier Khan Sheikhoun attack last year – the claim this time was that there was no attack at all. And that message was even published by some Western outlets.

In fact there is overwhelming evidence of the incident. The World Health Organisation estimated 500 patients went to health facilities with “signs and symptoms consistent with exposure to toxic chemicals”. Syrian opposition activists, rescue workers and medics say tens of people were killed in a suspected chemical attack. Bellingcat published a detailed open source survey of it and the EU stated that the evidence points towards yet another chemical attack by the regime.

During the past two weeks, Russia continued to spread multiple different and contradictory theories on the Salisbury attack. The disinformation storm has already managed to capture the majority of the information space on social media.

Czech and Georgian language outlets were repeating one of the main messages about the UK being behind the ex-spy Sergei Skripal poisoning. But there were new lines created as well: for example that the Salisbury attack is a provocation to justify NATO’s military budget increase. The message about the Russophobic and/or Nazi West was further elaborated with claims that the West seeks to convince the world that Russians are a nation of criminals and that it is “Goebbels propaganda” to accuse Russia of the poisoning. And the theory was even advanced that there is no such substance as Novichok, so the UK is lying about the Salisbury attack.

See the UK government response for the facts and two of our earlier reports on disinformation about the attack.

The disinformation campaign also attempted to show the support Russia gets from Europe. It claimed Finnish politicians have concluded that it was the Ukrainian secret services that conducted the attack. In fact the European Union – and Finland as an EU member state – expressed shock at the offensive use of any military-grade nerve agent, of a type developed by Russia, for the first time on European soil in over 70 years.

See all the disinformation cases reported during past two weeks: