How to Rob Peter to Pay Paul 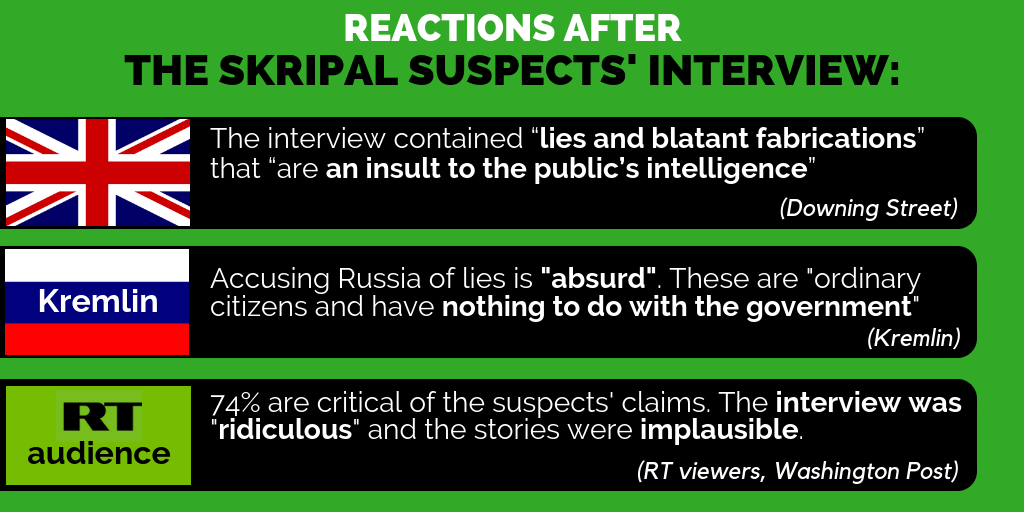 We have seen exactly this pattern during the last week in Russia’s disinformation ecosystem. The pro-Kremlin outlets were still hectically spreading all kinds of contradictory stories about the Skripal case and the suspects that had been identified by the British authorities  when they received  a “helping hand”: an interview with so-called Alexander Petrov and Ruslan Boshirov (the duo suspected of poisoning Sergei Skripal and his daughter), conducted by Margarita Simonyan, the head of the main international disinformation organisation of the Kremlin, Russia Today (renamed RT).

The obvious contradictions and feeble attempts to misrepresent reality were quickly debunked by solid media outlets (see the numerous articles linked in the disinformation cases), ridiculed on social media (see here and here), and caused an unusually angry reaction from the British government too. Downing Street called the claims an “insult to the public’s intelligence” and “blatant lies”, and wondered how Russia could allow “lies and blatant fabrications” to be aired on a state-funded broadcaster.

The statements made in the interview were so obviously false that some media marked it as a turning point in how the Skripal case is viewed by Russia Today viewers: “The previous data show that RT viewers were generally sceptical of the official British account of the Skripal poisoning. But [the] interview with the suspects marked a dramatic change — the top 100 most-liked comments included many from viewers who felt the interview was ridiculous and that the suspects’ stories were implausible. Fully 74 percent were critical of the claims presented by the suspects. Some viewers even noted that the interview itself had changed their opinion of the whole affair,” wrote the Washington Post. Simonyan failed to manage the situation and even hung up during a live interview with BBC Newsnight.

Was that too nonsensical? Let’s spread some other nonsense then!

The reaction of the Russian government was simple – let’s add more fuel to the blaze of disinformation. Falling back on one of the most tried and tested disinformation subjects of past years, the Ministry of Defence held a press conference just four days after the interview in order to spread new “alternative” versions of what had happened to Flight MH17. And no wonder, once again we have heard versions that contradicted even the Ministry’s own claims.

The claims are stemming from the new theory that it was a Ukrainian missile that shot down MH17. You will find all the claims among the disinformation cases: the Russian independent outlet The Insider has found no less than six attempts to disinform in this particular press conference. At this point we should recall, by the way, that in 2014 the very same Ministry of Defence presented “irrefutable evidence” that it was a Ukrainian jet-fighter (not a missile) that shot down the MH17.

This disinformation flood of contradictions is something we and other researchers have described many times before, and not only about MH17 (see here or here) but also in the Skripal case (apart from our article linked above, see e.g. here); in the case of the attack on the humanitarian aid convoy in Syria in 2016; or in the case of the murder of Boris Nemtsov in 2015 (watch the Lithuanian movie War 2020, Russia’s Information Aggression from 43rd minute).

It seems that every time reality gets too difficult, the Kremlin disinformation machine has one and the same manuscript: pollute the information space with as many contradictions and disinformation messages as possible, so that the average media consumer loses track of what is a fact- and evidence-based attempt to describe reality, and what is just a disinformation attack trying to confuse and mislead.

Date
Title
Outlets
Country
Ukrainian Authorities Deliberately Sent MH17 Airliner Into Warzone
Ukraine
Missile that shot down flight MH17 belonged to Ukraine, not to Russia
Ukraine, Russia
It was a Ukrainian regiment that shot down MH17
Ukraine, Russia
Ukraine didn't provide information for the investigation of MH17
Ukraine, Russia
MH17: JIT used fake video to show the missile had come from Russia
The Netherlands, Ukraine, Russia
MH17 was shot down by a Ukrainian missile: declassified archive documents are irrefutable evidence of this
Ukraine
White Helmets are a "rebranding of Al Qaeda"
Syria
Idlib: Another provocation, which is likely to be carried out by the so-called White Helmets, is being prepared
Syria, US
The EU is conducting a hybrid war against Moscow
Russia
A real horror is going on in Northern Europe as a result of joining the EU, Sweden and Finland economically collapsed
Sweden, Finland
A staged chemical weapon attack was shot in Idlib
Syria, Russia
Neither Alexander Petrov nor Ruslan Boshirov named by the UK as Novichok suspects can be regarded as GRU agents
UK, Russia
Petrov and Boshirov went to Salisbury to see the Salisbury Cathedral
UK, Russia
Bad weather did not let the Skripal case suspects enjoy the sightseeing in Salisbury
UK, Russia
Ukrainian children were offered to play as Hitler's accomplices
Ukraine
Ukrainian MFA commits a "water genocide" against Crimean residents
Ukraine, Russia
Neither the USSR nor the post-Soviet Russia has ever killed their opponents, so nobody can blame Moscow for poisoning the Skripals.
USSR, Russia
The absolute majority of Orthodox Ukrainians consider themselves to belong to the Moscow Patriarchate
Ukraine, Russia
The salaries in the UK are so small that people live like slaves and cannot survive with this money
UK
Life expectancy in Russia has increased by seven years over the past decade
Russia
A network of US military laboratories deployed across Georgia to deal with biological weapons
Georgia, US
Opponents of Brexit will be forcefully dispersed by Britain’s military and police
UK
Promising to Make a 'Good Juicy Chop' of Opposition Leader is No Physical Threat
Russia
Russia's Defence Ministry: White Helmets are already filming the fake chemical attack in Syria
Syria, Russia
Allegations about the Syrian government troops using chemical weapons: aimed at Germany to stop Nord Stream 2
Syria, Germany, Russia
Russian universities are among the top in the world
Russia
Kyiv is moving from a civil war to a terrorist war, Crimea was used by ISIS members as a hub
Ukraine
Kyiv has no intention of exchanging prisoners with Kremlin
Ukraine, Russia
Hasidic men raped an underage girl in Ukraine
Ukraine
There was no Russian occupation in Georgia
Georgia, US, Russia
The speaker of Ukraine’s Verkhovna Rada calls Hitler “the biggest” democrat
Ukraine
Merkel called on Georgia to accept Syrian refugees
Syria, Georgia, Germany
Douma incident was a propaganda stunt orchestrated by the Western-backed White Helmets
Syria
Rumours of the existence of secret protocols to the Molotov–Ribbentrop Pact appeared soon after the pact was signed, but the originals of these "secret additions" have not been found still today
USSR, Germany, Russia
Human Rights Watch asks the Georgian government to decriminalize personal use of all drugs
Georgia
Largest Opposition Party in Macedonia is Boycotting Name Referendum
North Macedonia
By continuing to browse the site you are agreeing to our use of cookies.