"If it works out in France, the result will be unpredictable" 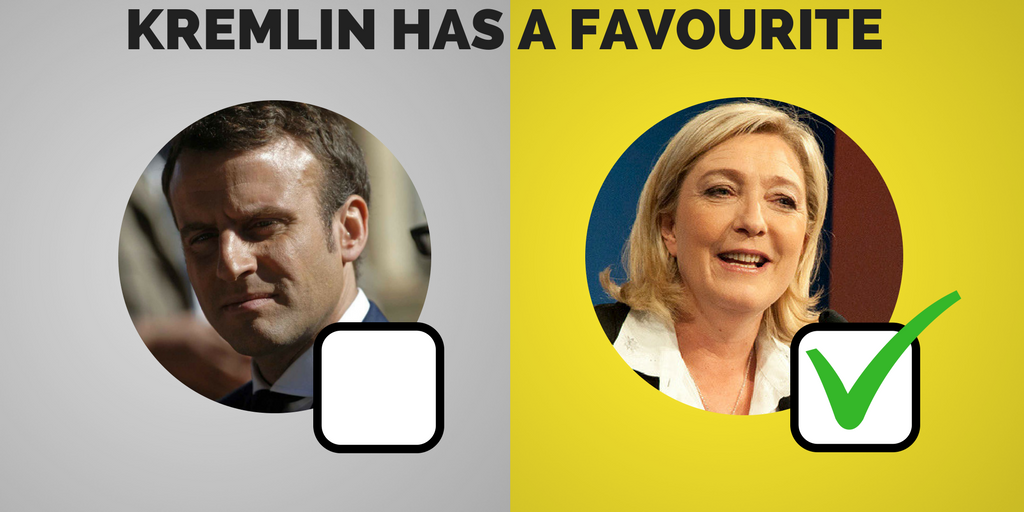 Marine Le Pen’s visit to Moscow and her meeting with President Putin last week were played out in Russia in such a way as to make it clear that Mme Le Pen is Moscow’s favourite in the French election campaign. Emmanuel Macron, on the contrary, remains the candidate Moscow would rather not see in the Élysée Palace, as we also underlined in February. The ways in which these two presidential candidates have been treated by the dominating Russian media both underscores the Kremlin’s preferences and demonstrates the degree of coordination between pro-Kremlin media and the Kremlin’s official political communication. On Monday, an incorrect reference to French Guiana as an island by Emmanuel Macron became a top news story on Russia’s state-owned TV Rossiya-1. Russia Today (RT) also latched onto the incident with the headline “‘Go learn geography’: Internet goes wild over presidential candidate Macron’s French Guiana mishap“. On the same day, Rossiya-1 ran a news story with the simple headline “Marine Le Pen criticises the EU“. Earlier in the week, NTV clarified in a headline that “after her visit to Moscow, Marine Le Pen has taken the lead over Macron”. This particular NTV piece is a good example of the tone in pro-Kremlin reporting, which foresees the end of Europe: “Europe is leaning right, but it hasn’t fallen. All the countries are watching the elections in their neighbour states with interest and horror […] Next in line is France. The flagship of European politics. If it works out there, the result will be unpredictable. And it now looks like the right forces in France will be able to save the nation. The leader of the “National Front”, Marine Le Pen, says what the French [voters] want to hear. She promises to work on the mistakes: To drive out the migrants, give jobs to everyone and not to feed the EU anymore”. In his Sunday night programme, Dmitry Kiselev (on the EU’s sanctions list and the Kremlin’s chief propagandist) also addressed the French election campaign. Again, the tone is an important driver in getting the propaganda message across. Here is how the televised debate between French presidential candidates was described: “‘Rapprochement with Russia is unacceptable – so the most pro-European candidate, Macron, who had travelled to visit Angela Merkel, unexpectedly said. His talk about foreign policy went on and on and was typical of his young age. His monologue, which full of contradictions, immediately evoked sarcastic remarks among his three opponents”, so Russian state television reported. Among the more independent Russian media, the tone has been markedly different: Leading daily newspaper Kommersant underlined in a commentary that “Russian media and politicians clearly dislike Emmanuel Macron”, but reassured its readers that it is propaganda when Mr. Macron is described as an outright anti-Russian politician. The English language newspaper Moscow Times raised the question in what way meeting Marine Le Pen is useful for the Kremlin, and concluded that “given Le Pen’s calls for withdrawing from the EU and the Eurozone, this is as close as Russia can get to a political declaration of war”.