The narrative that Russia alone liberated Europe from fascism persists in the country that calls World War II the “Great Patriotic War”.

Russia celebrates Victory Day on 9 May – not the end of the war on 8 May – and its commemorations focus on heroism rather than on victims.

The Immortal Regiment
As the surviving veterans, who used to lead 9 May parades, die out from the natural cause of time, Russia has found a new way of marking the anniversary: The focus is no more on the famous military parade on Red Square, but on the more inclusive annual march in which Russian citizens carry portraits of relatives who lived through or perished in the war, the so-called “Immortal Regiment.”

The Immortal Regiment began as a grass root initiative in 2007, but was picked up by the Russian government, which has turned it into an official practice.

According to government sources, 650,000 citizens participated in this year’s march in Moscow only, reflecting the significance of Victory Day for Russian society. A total of more than two million people marched in more than 50 countries across the world, Russian government TV Pervy Kanal reported. 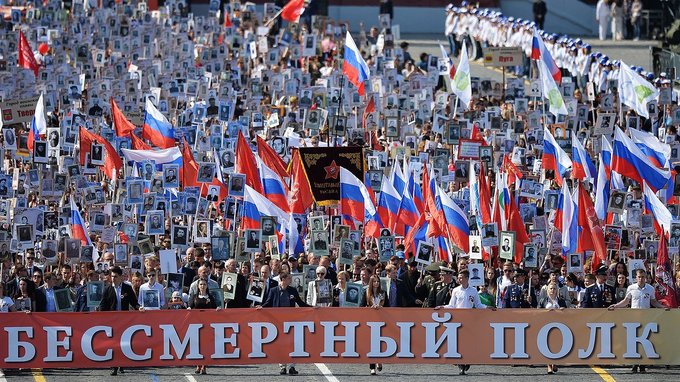 Putin has successfully tied the 9th of May to himself
Despite the undoubted popularity of 9 May in the Russian society, independent Russian voices showed some signs of growing concern with the new practice.

Prominent opposition journalist Oleg Kashin underlined: “‘Foreign politicians,’ who want to take this holiday away from us have become a part of the official mythology, without which we cannot imagine Victory Day.”

According to Kashin, “Try and rebel against the Great Victory – you will yourself be trampled by the people […] Putin has successfully tied the 9th of May to himself to the extent that if you are against Putin, you automatically, and even unwittingly, are against the St. George ribbon, and then against the parade, and against the “Immortal Regiment,” and against all the grandfathers who fought in the War.” 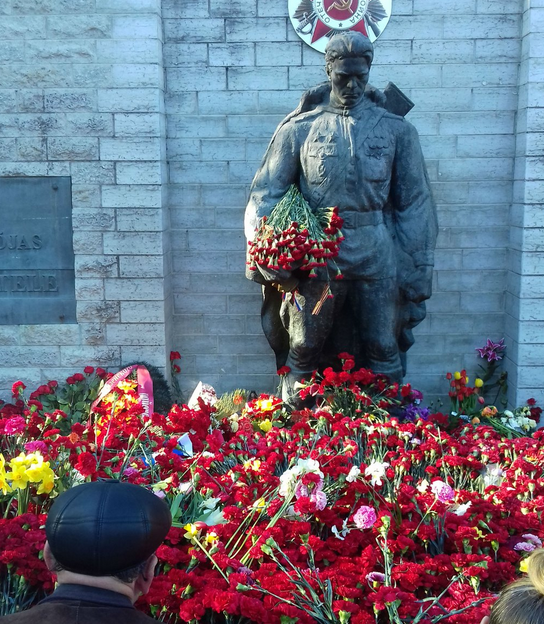 “Fascism is a lie told by bullies”
This year, an increasing number of important Russian critical voices expressed concerns with what they saw as elements of fascism in these mass events and their ideology: Popular poet Dmitry Bykov presented a poem in Novaya Gazeta, in which he warns against an assimilation between modern Russian society and the fascism of the past.

Independent TV Dozhd re-published an essay by Russian writer Boris Strugatsky, where he expresses concern about fascism in modern Russia, tying the systematic use of disinformation to fascism with a Hemingway quotation: “Fascism is a lie told by bullies”.