“If You Want to Know, You Can Know” 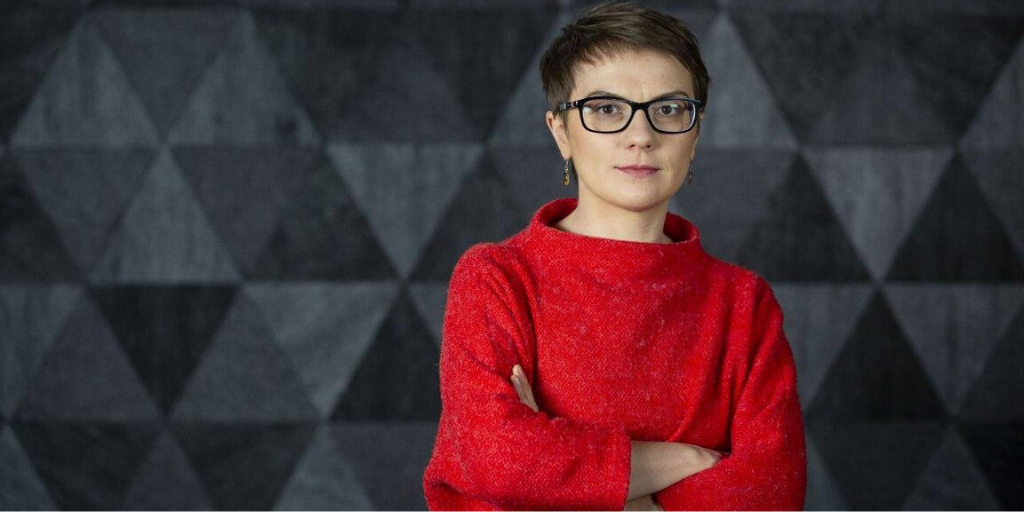 Nataliya Gumenyuk is a Ukrainian journalist and the author of the book The Lost Island, which was published in Kyiv in February 2020.

The Lost Island presents a collection of reportage articles from Crimea, written by Nataliya Gumenyuk in the course of the six years since Russia’s illegal annexation of the Ukrainian peninsula. The Book has so far been published in Ukrainian, translated into Russian and is available as an e-book (Ukrainian version; Russian version).

In this exclusive interview with EUvsDisinfo, Nataliya Gumenyuk discusses her book, the problem of disinformation and propaganda in occupied Crimea, and how perceptions of the annexation – including her own – have developed over time.

Nataliya Gumenyuk specialises in foreign affairs and conflict reporting. Between 2016 and 2020, she was the head of Hromadske – a Ukrainian media outlet, which was created during the Euromaidan events, weighing in as an independent voice

Q. Why did you decide to write a book on this topic?

A. The book begins with an answer to the question of a foreign journalist, “why are you writing this book?”.

I turned out to be one of the few Ukrainian or foreign journalists who, since the day of the so-called “referendum”, has travelled to occupied Crimea over the following years.

I have talked with as many Crimeans as possible – pro-Ukrainian, pro-Russian, pensioners, entrepreneurs, families of political prisoners. At the same time, I have observed how the Ukrainian, the Russian and different Western communities have come to terms with the annexation.

Crimea is not a hot spot, and that makes people say: “the Crimean question can wait.” It is precisely the words, “we do not fully know what is happening there,” which, in my opinion, become an excuse for inaction. If you want to know, you can know.

Collecting my reportages in a book, I felt that since I was lucky enough to have heard so many voices of the annexed Crimea, those who shared their stories, I must retell them. As well as I am obliged to explain that even if the pain from the annexation is a quiet pain, it is no less important. 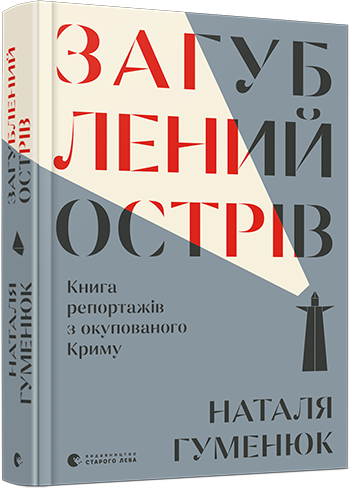 The Lost Island is available as an e-book in Ukrainian and in Russian.

Something that can be found again if you try

Q. The book is called “The Lost Island”. Who do you think has lost Crimea? And why?

The first chapters, which take place in March and May 2014, describe the shock and the turmoil in which the occupation of Crimea happened: the Maidan, the outbreak of war in the Donbas. At that point, Crimea was “lost”, both by the Ukrainian government, by Ukrainian society, and, of course, by the Crimeans themselves; but also by the West, which was in a waiting position.

To a lesser extent, I speak about the history of Crimea before the annexation; but these thoughts are also there. In other chapters – and the book ends around 2019 – I show that mentally, it is not clear where Crimea is – it is lost to everyone. As if it is a point on a map, which frantically “disappears” and then appears again.

Q. Does pro-Kremlin disinformation affect people’s everyday life in Crimea? If so, how? Has the attitude of the Crimeans towards the propaganda changed over time?

A. The book includes an example of how two neighbours argue about whether they have an underground lake in the village (“because then Crimea would not need water from mainland Ukraine”). There is no such lake; but this surreal dispute between living people is real.

During the annexation, people were promised specific things – for example, university students who pay for tuition would be transferred to studying for free. This didn’t happen. They promised that the situation for the teachers of the Ukrainian language would not change – de facto there is no teaching of Ukrainian language anymore. A lot of what was said turned out not to be true.

Five years after Russia’s illegal annexation of Crimea, Nataliya Gumenyuk returned to those people whose stories she told over the first few months of the occupation. Watch the documentary in English on YouTube and read about the production.

But there is also a creepier example. Before the occupation, there were 800 patients undergoing substitution therapy in Crimea (when people are given methadone in hospitals). They were also promised that nothing would change. In the Russian Federation, substitution therapy for drug addicts is prohibited. The program was closed immediately. In the spring of 2014, people were praying for help.

Russia has very strict anti-drug legislation and everyone is afraid to talk about it. This is a concrete example where people simply died. They were deceived. And nothing has been done, or is being done, to save them.

Q. Can you single out a theme in the general disinformation around Crimea – one which, in your opinion, it is particularly important to challenge?

A. The first is that there is corruption in Ukraine, but in Russia there is no corruption. They did not defend Yanukovych in Crimea; on the contrary, they said that all Ukrainian presidents were like him.

They stoke fear of the “rotting West”, and by saying that life is worse in the EU. At the same time, I’ll say that any relief from the sanctions or any kind of visit by a former member of parliament from a European country is seen as a sign that “the world has recognized Crimea as part of Russia”.

Also, Ukraine is often shown as a war territory. It really works. They push this very aggressively.

They stoke fear of the war in Donbas. Even when I was at a service in the only Ukrainian church (which has now been closed), someone came up to me and asked, “aren’t you scared to live in Kyiv?”

Russia justifies the annexation by the fact that the Kremlin is investing in Crimea – and this is so, although Crimea, instead of a wonderful holiday resort, has become more like a standard frozen post-Soviet conflict, like Abkhazia or Transnistria.

This is the main justification they use for annexation. But to accept this – and I myself have heard such questions from Western journalists – is, in essence, to admit that any slightly richer state has a right to seize the territory of another state, if it is slightly poorer.

There is also the demonisation of the Crimean Tatar population as potential terrorists. Without any reason, siloviki from the Caucasus, from the Muslim regions of the Russian Federation, are being transferred to Crimea in order to “fight Islamic radicalism” – they come from regions where this has been a problem. But there has never been a single terrorist attack in Crimea. Around 70 Crimean Tatars are in prison, based on fabricated extremism charges.

A return to the worst pages of history

Q. How did your frequent trips to Crimea and your work on the book affect your own perception of the annexation?

A. I was always interested in the fact that, despite all the big words about human rights, the issue of protecting individuals is even secondary today. Russia’s occupation of Crimea shows even more clearly that the concept of human security in the 21st century has less priority than geopolitics.

I’m not from Crimea, not from Donbas; but having worked in both places, I understand more and more that these regions differ less than many would think. Regional features cannot be discarded, but you should be careful with them.

I went to school when Ukraine was already independent, grew up in a society where there has never been a war since World War II. The fact that the conflict was created out of the blue before our eyes is a tragic experience.

The annexation of Crimea showed me that it is possible, just like that, while the whole world is watching, to return an entire territory to the past, to return to the worst pages of history.

It hurts that you are not free in your own country

Q. How did you, as a Ukrainian journalist, work in Crimea? Did you encounter any obstacles? If so, how did you cope with them?

A. Of course, you need to work carefully without attracting attention, so that first of all you do not put the people who talk to you at risk. Obviously, it hurts that you are not free in your own country; moreover, you are treated as a party to the conflict. 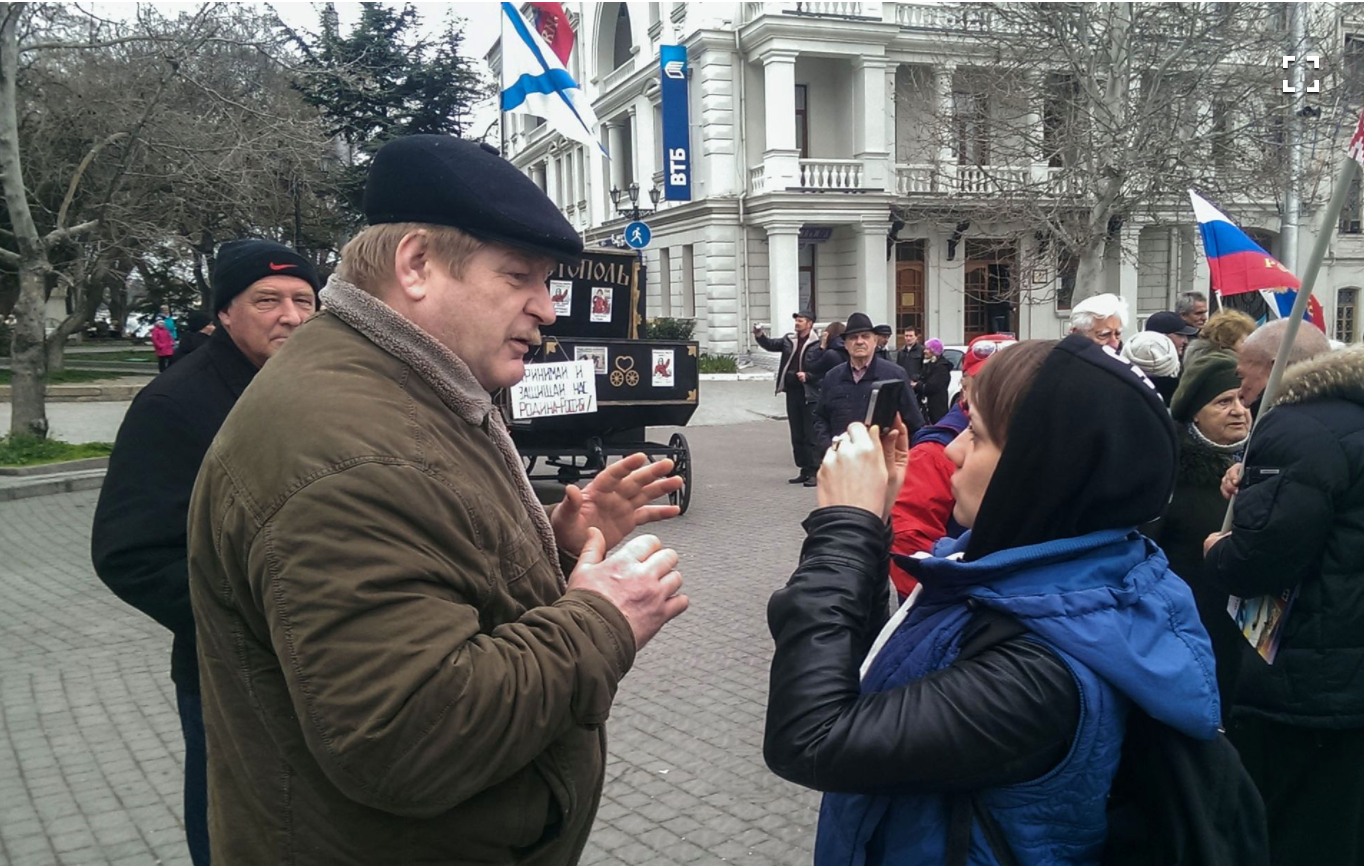 Nataliya Gumenyuk reporting from Crimea. The Ukrainian peninsula was illegally annexed by Russia in March 2014.

But I worked as a journalist in Iraq, Iran, and the Middle East. And compared to this, I will say that working at home is easier. I know Crimea better than most Russians; I speak like everyone there without a clear Moscow accent. It’s easier for me to blend in and find a common language.

It is necessary not to generalise, but to understand

Q. You covered the Arab Spring as a journalist. From the point of view of disinformation, do you see a similarity between the situation in Crimea and the Donbas on the one hand and the Middle East on the other?

A. First, in both these places I have seen how disinformation is based on all kinds of conspiracy theories. With a global conspiracy as the main topic, and the claim that “everything is decided for us,” which means that as an individual, you have no significance.

It is very similar to how authoritarian regimes not only create an alternative reality in the media, but also do everything possible to prove their intentions by their actions.

When I covered the beginning of the war in Syria, I remember how Assad’s regime tried to prove that its opponents were terrorists; although it all started differently. We know what this all led to.

The Kremlin said, “don’t go to the Maidan, otherwise there will be a war”, and wanted people to believe that; but when it turned out that this was not the case, the Kremlin started the war itself.

That being said, I would like to say that propaganda was not the only problem; there was also the Russian army – in Crimea and in Donbas. The BUK [surface-to-air missile], which shot down Flight МН17, is not a disinformation weapon, but a real weapon. During the annexation, not only Kiselyov’s voice was heard – there were also soldiers in the streets.

Speaking specifically about disinformation, while still working in Egypt in 2013, I remember how visual fakes appeared – video and photos. That is, people were inclined to believe the video more, because you can’t “fake” it, so they thought; but it turned out to be just as easy.

You also need to understand that all such campaigns are very targeted. Each group has its own approach. Religious people are scared by the “Gay-ropa” propaganda; people who are nostalgic for the USSR are scared by stories about Western capitalism; some about corruption, others  – about the war. This means that in order to protect people and defend yourself, it is necessary not to generalise, but to understand.