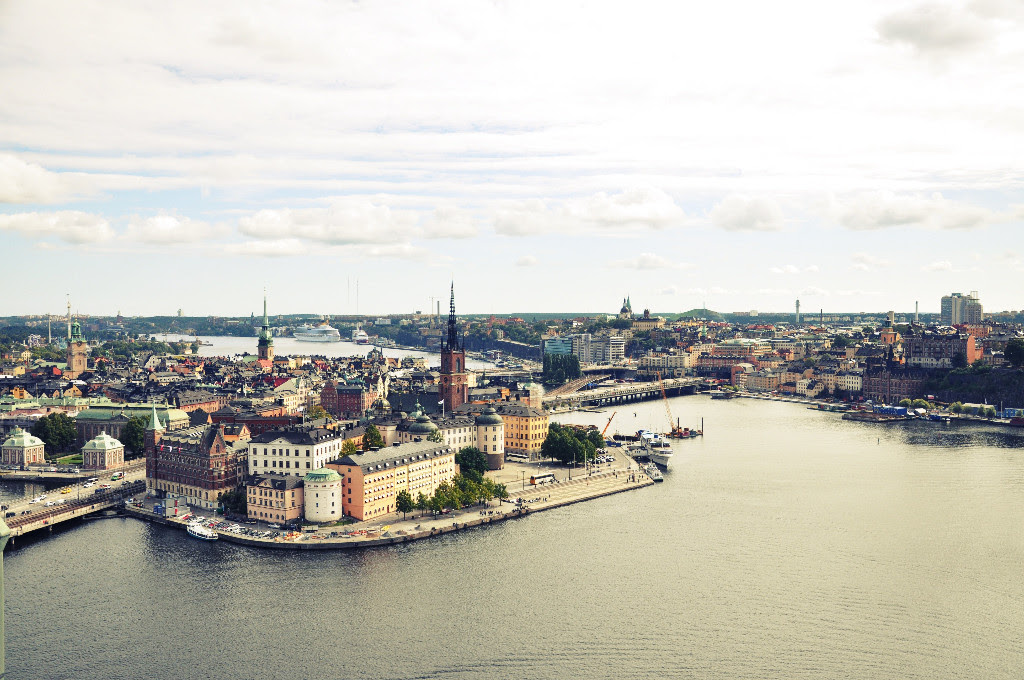 Social alienation is a condition characterised by a low degree of common values and integration and a high degree of distance between individuals or groups of people. That sense of distance between two groups feeds on a sense of doubt about “the other”. In pro-Kremlin disinformation, Europe/the West is that “other”, and thus has to be presented as different in some way – perhaps suspicious, evil or simply weak.

This week in pro-Kremlin disinformation, we learned once again that European countries are “Russophobic”; that they steal children away from their parents without any grounds; and that they are imposing LGBT policies to make Georgian children immoral so that they conduct colour revolutions when they grow up. These are all topics we have seen before – read more here, here and here.

Sweden also made it back to the disinformation headlines this week. We learned that there is apparently an imminent threat of civil war in this country that enjoys one of the world’s highest living standards. Last week in Sweden, so we were told in disinformation outlets, the chief of the National police called for international help since the country is torn to pieces by Muslim immigrants. In reality, he called for increased cooperation between state agencies in vulnerable areas – calling for help on a serious issue, it’s true, but a far cry from civil war.

No jazz for Ukrainians

According to the official TV channel of the Russian Ministry of Defence, TV Zvezda – also known for past disinformation stories such as that Ukrainians steal food from pigeons and that there are zombies fighting in the Ukrainian army – the Lviv jazz festival had to be cancelled this year due to the serious health threat posed by the amount of rubbish in the streets.  In fact, the Alfa jazz festival was held according to plan and there were never any plans to cancel it, nor was the question even discussed.

Lenta.ru informed its readers that Kyiv had planned to attack flight MH17, again seeking to sow doubts on the cause of this tragic event, even though the technical report of the Joint Investigative Team has clearly concluded that the missile that shot down MH17 was fired from a Russian vehicle that crossed into Ukraine and then back to Russia again afterwards. 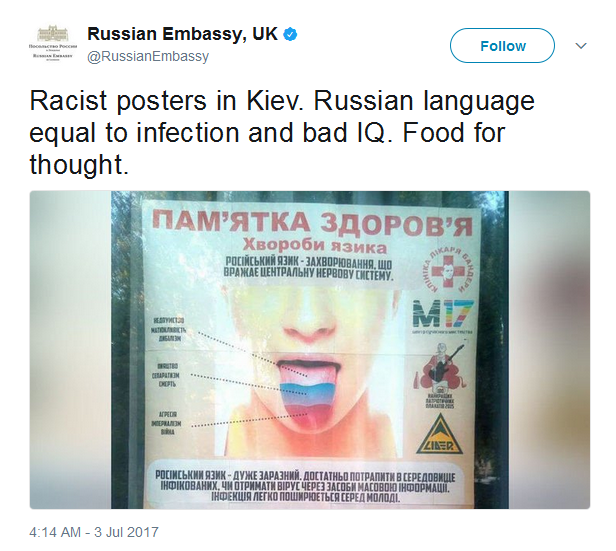 There aren’t any racial ad campaigns on the streets of Kyiv.

Regular disinformation outlets were active again this week in spreading disinformation about Ukraine, claiming that there is an ongoing poster campaign on the streets of Kyiv projecting the Russian language as a sign of low IQ and equivalent to an infection. This plays into the common but unsubstantiated disinformation narrative that Ukraine is threatening its Russian speakers. But there is just one detail in the poster story that needs to be corrected; the poster – however deplorable, was only one single amateur contribution to an exhibition in 2015, not an ongoing ad campaign on the streets of Kyiv. So, just another part of the ongoing Russian disinformation campaign.

Date
Title
Outlets
Country
Ukrainian foreign policy is a disaster, and all the visits...
France, US, Ukraine
Polish mercenary soldiers are fighting in Donbas
Poland, Ukraine
There are racist posters in the streets of Kyiv that...
Ukraine, Russia
Members of Azov shelled the separatist controlled village of Bezimenne...
Ukraine
A centre for immigrants in Italy is looking for women...
Italy
Ukranian authorities are aware of the scheme of selling Ukranian...
Ukraine
The US has turned Germany into a military training area
Germany, US
The West wants to weaken the integrity of Central and...
The US created and supports ISIS and the US Defense...
US
A Ukrainian fighter jet was operating in the area around...
Ukraine
The EU is a "Fourth Reich", which wants to control whole Europe
EU, Europe
NATO and the EU are threats to the national security...
Czech Republic
The EU migration crisis is an invasion organized by the EU and USA
US
The US is supporting terrorists in Iran and aims to...
Iran, US
Ukraine is a nest of neo-Nazis due to the Orange...
US, Ukraine
The White Helmets are responsible for the chemical attack in...
Syria
First fruits of immigration processes in Europe: German family of...
Germany, Russia
Refugees from Africa and the Middle East control ever bigger...
Sweden
Swedish National Police Chief warns of imminent civil war in...
Sweden
Europe and NATO try to force Georgians to become LGBT
Georgia, Russia
Germany and Finland may leave the EU
Finland, Germany
"Western powers" allow ISIS fighters to destabilize countries on Russia's eastern borders
Iraq, Syria, Russia
Western LGBT mafia is weakening the influence of the Orthodox Church
The EU wants to ban all exports from Ukraine
Czech Republic, Ukraine
Sweden is being torn to pieces by Muslim immigrants and...
Sweden
The American fighter plane that intercepted the Russian flight last...
US, Russia
Greenpeace Russia has used CIA spy satellite data to show...
Russia
Ukraine’s premier jazz festival was to be cancelled because of...
Ukraine
"Ukrainianness" is a fabricated anti-Orthodox anti-Russian project implemented by Lenin...
Ukraine, Russia
We are living the era of an outbreak of racism...
US, Russia
First fruits of immigration processes in Europe: German family of...
Germany, Russia
Finland practises juvenile terror: children are taken away from their...
Finland