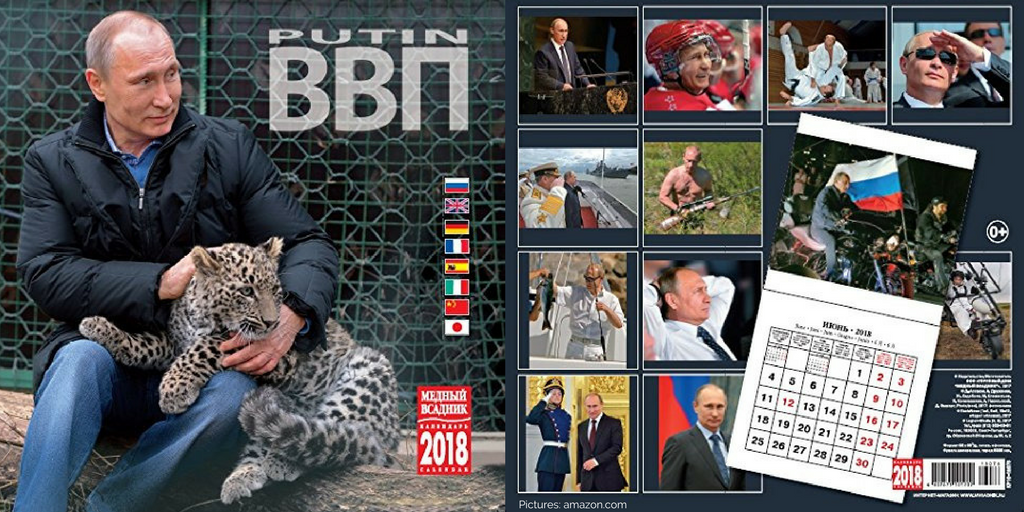 A frequent topic in the pro-Kremlin disinformation campaign is exaggeration of the alleged popularity of Russia’s President in countries outside Russia. The latest example is a story run in Russia by Tsargrad and Zvezda (above image), the latter of which is the official outlet of the Russian Ministry of Defence. Both these pro-Kremlin outlets last week told the story of how a new calendar with images of the Russian President was allegedly enjoying overwhelming popularity in the UK.

“Media: Brits buy Putin calendar in massive numbers,” Zvezda told its readers, adding that “the calendar with images of Vladimir Putin has caused a stir in Britain”. On a similar note, Tsargrad told the readers of its website that “Brits were literally grabbing the calendars with Putin from the shelves”, with reference to “local media” in the UK whose identity were not however specified.

The problem is, the calendar in question is not for sale in UK shops; as underlined in research carried out by Alexey Kovalev, a Russian blogger who specialises in debunking disinformation, the calendar was simply put up for sale on e-Bay by a Russian individual in the Russian city of Voronezh. The claims about its popularity are not documented.

The calendar was put up for sale on eBay by an individual who lives in Russia.

And even though Britain’s Daily Mirror had already reported that a new Vladimir Putin calendar was available, the claims made by Zvezda and Tsargrad about its popularity among British consumers were made up. They represent one of many cases where disinformation builds on a fact (someone in Russia had indeed produced a calendar), but then distorts that fact. The use of a factual base makes the disinformation look more credible, and debunking it becomes less straightforward than when the stories are taken out of nowhere.

The message about the Russian President’s alleged popularity was at also the centre of the recent scandal when RT (Russia Today) falsely staged a scene with a Vladimir Putin birthday burger in a New York restaurant. Another related case was the publication of a calendar which showed young Syrian women posing and expressing their love for the Russian president, as we reported in January.