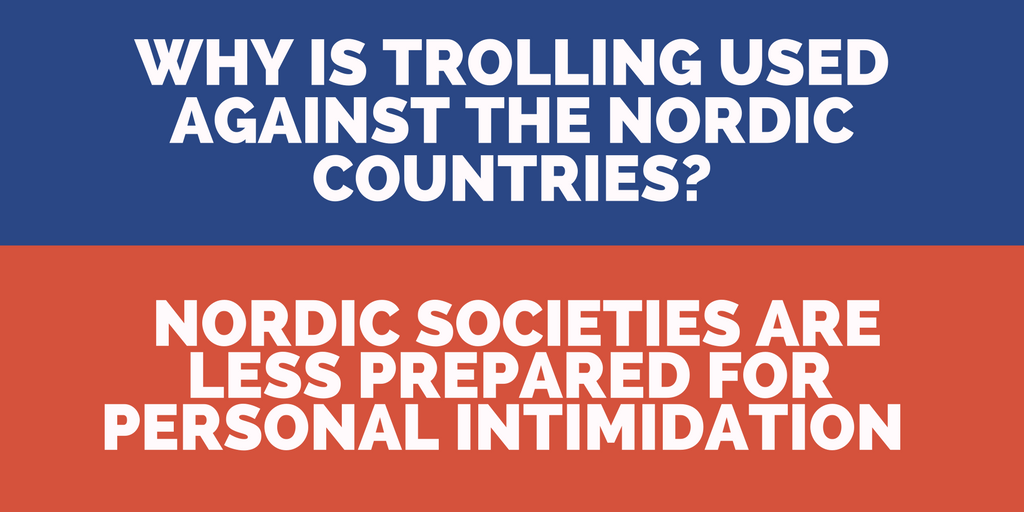 According to a poll shared by Radio Free Europe, Russia enjoys significantly less popularity in the Nordic countries than in the majority of European countries. This may be why official Russian outlet Sputnik closed its Danish, Finnish, Swedish and Norwegian language services last year: In an environment where Russia’s policies and actions are fundamentally unpopular, it is difficult to build an audience using very openly pro-Kremlin messaging – even if it is communicated in the local language.

In the recent analysis of the methods applied by the pro-Kremlin disinformation campaign, the East StratCom Task Force has pointed out that “targeting the Russian speaking minority seems the most important tool in the Baltic states, whereas in Central Europe it seems to be the use of dozens of “alternative“ websites, while trolling seems most prevalent in Scandinavia”. Why is it that trolling becomes the preferred propaganda method in an environment where pro-Kremlin views enjoy little popularity? If the target audience shows strong resilience to the political message, provoking fear, discomfort and confusion among journalists and other communicators could be a way of promoting self-censorship and perhaps even the kind of collective caution, which during the Cold War became known as “Finlandisation”.

Examples of trolling and intimidation abound in Nordic countries: Finland knows of a sad, but well-documented example of how the phenomenon of trolling has been be taken to a new level as openly Russia-affiliated activists are accused of intimidating journalists that cover Russian affairs, or journalists that decide to investigate the phenomenon of trolling. Recently, Johan Bäckman, a Finnish national who faces court proceedings for such intimidation, has also been denied the right to buy a broadcasting radio station in Tampere, Finland; Finland’s authorities found that the takeover would represent a threat to national security, as Finland’s public broadcaster YLE reports.

Similarly, Sweden has seen a verdict handed down against a “troll” spreading defamatory disinformation against a Swedish expert commentator who is known for having Kremlin-critical views. Last autumn, we reported about an individual who, using several aliases, trolled the Swedish internet from his workplace in the Swedish Parliament until he was discovered and forced to leave.

More recently, Norway’s security and intelligence service published its annual report, highlighting among other threats intimidation and blackmail targeting individual Norwegians from the side of Russian authorities. The primary group of victims has been Norwegians who travel to Russia and residents of Norway with a dual Norwegian-Russian citizenship or with family in Russia.