It is All in the Headline: the Subtle Art of Information Manipulation 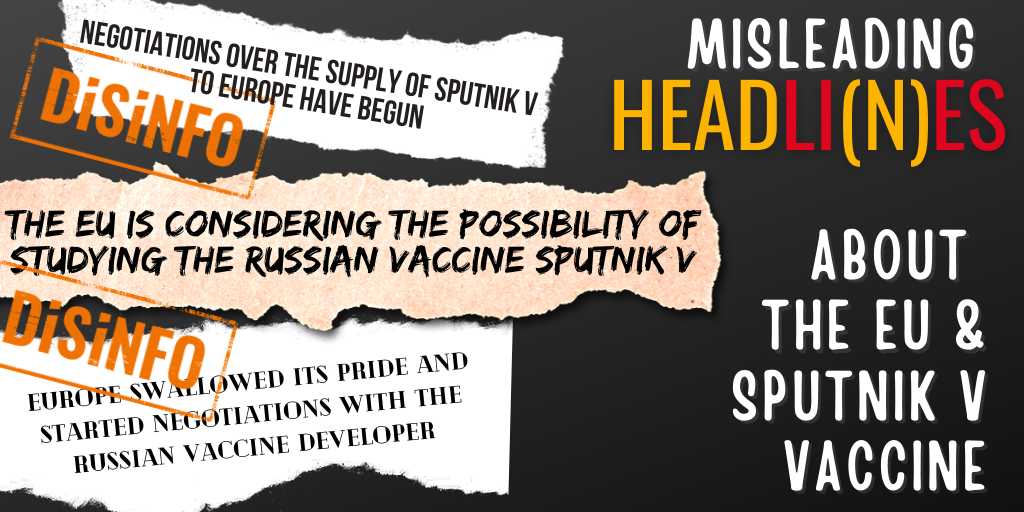 Pro-Kremlin media are drumming up support for the Sputnik V vaccine by creating the perception that the European Medicines Agency (EMA) has initiated negotiations with the developer of the Russian vaccine, the Gamaleya Centre.

In fact, the European Commission spokesperson for health has stated, that “the European Medicines Agency has not yet received a marketing authorisation request for the Russian vaccine against COVID-19. However, the agency was contacted by the vaccine manufacturer, and they are now in the early stages of discussing a vaccine.”

The European Medicines Agency does not take part in vaccine negotiations aimed at securing a portfolio of suitable vaccine candidates for the EU. The Agency provides independent recommendations on medicines for human and veterinary use in Europe, so if the Russian developer wished to place their vaccine on the EU market it would have to approach the EMA with a request for a rolling review or a marketing authorisation application, just as any other vaccine developer. So far, according to the Russian outlets themselves, the EMA has not received an application for the sales of Sputnik V on the European market.

The issue of misleading headlines

The issue with misleading headlines might seem minor in the context of the multiple challenges posed by disinformation. However, a headline can change the way we think, triggering misconceptions and mental shortcuts based on our own pre-existing awareness of the issue at stake. Hence, even though the Russian state-controlled news agency RIA provides a quote by the European Commission spokesperson and explains that the EMA has not received an application from the developer of Sputnik V, its headline “EU Agency for Medicine started talks with Sputnik V producer” (Агентство ЕС по лекарствам начало переговоры с производителем “Спутник V“) distorts the reported situation. It creates an impression that the European Union is seeking out the Russian vaccine and not the other way around, thus reinforcing the broader narrative about the global success of Sputnik V.

Some media outlets took even greater liberties with their reporting. Russia’s state-owned newspaper Rossiyskaya Gazeta used its headline to announce that “Negotiations over the supply of Sputnik V to Europe have begun” (Начались переговоры о поставках “Спутника V” в Европу), when in fact they haven’t. According to the headline on the Krasnaya Vesna website, “The European Union is considering the possibility of studying the Russian vaccine Sputnik V” (Евросоюз рассматривает возможность изучения российской вакцины «Спутник V»), implying that the EU is after the scientific value of the vaccine. In fact, as noted earlier, the EMA would only assess the suitability of the vaccine for the European market upon receiving an application from the developer, which has not happened yet.

The undisputed leader in creative headline-writing, however, is the nationalist-oriented TV channel Tsargrad, which proclaimed that “Europe swallowed its pride and started negotiations with the Russian vaccine developer” (Европа проглотила гордость и начала переговоры с производителем вакцины “Спутник V”). In other words, the desperate, resentful EU was forced to suppress its Russophobic instincts and implore Moscow to roll out its superior product on the European market.

Misleading headlines about the Pfizer-BioNTech vaccine

Unfortunately, misleading vaccine-related headlines in the pro-Kremlin media have not been isolated to one instance. As the US Food and Drug Administration (FDA) issued a peer-reviewed report detailing the progress of Phase II and III trials for the Pfizer-BioNTech vaccine, disinformation outlets found another opportunity for “creative” biased headlines. For example, Tsargrad used a sensationalist headline about the “Bloody price of Pfizer and BioNTech vaccine”, while News Front announced that it was finally known, “how many people were killed with the American COVID-19 vaccine” (Стало известно, сколько человек убила американская вакцина против COVID-19).

In this instance, disinformation outlets referred to the FDA report, which found that 6 out of 43,448 participants in the vaccine trial died. Crucially, the report says that “All deaths represent events that occur in the general population of the age groups where they occurred, at a similar rate,” while a supplementary FDA briefing makes it clear that “[n]one of these deaths were assessed by the investigator as related to study intervention”. In their articles, disinformation outlets acknowledge that 4 out of 6 deaths took place in the placebo group. But neither Tsargrad nor News Front care to dissuade their readers from directly attributing these deaths to the vaccine.

Over the past few months, pro-Kremlin media have been bombarding audiences at home and abroad with spurious claims concerning the global drive to curb the COVID-19 pandemic through mass vaccination. It has come a long way; from amplifying conspiracy theories about the origins of the coronavirus to fueling anti-vaccination moods in spring, it has now entered a new phase of promoting the Sputnik V vaccine to global audiences. This is clearly illustrated in the evolution of pro-Kremlin disinformation narratives about vaccines in the timeline below.