Kant, the philosophy of Autonomy, Truth and Peace 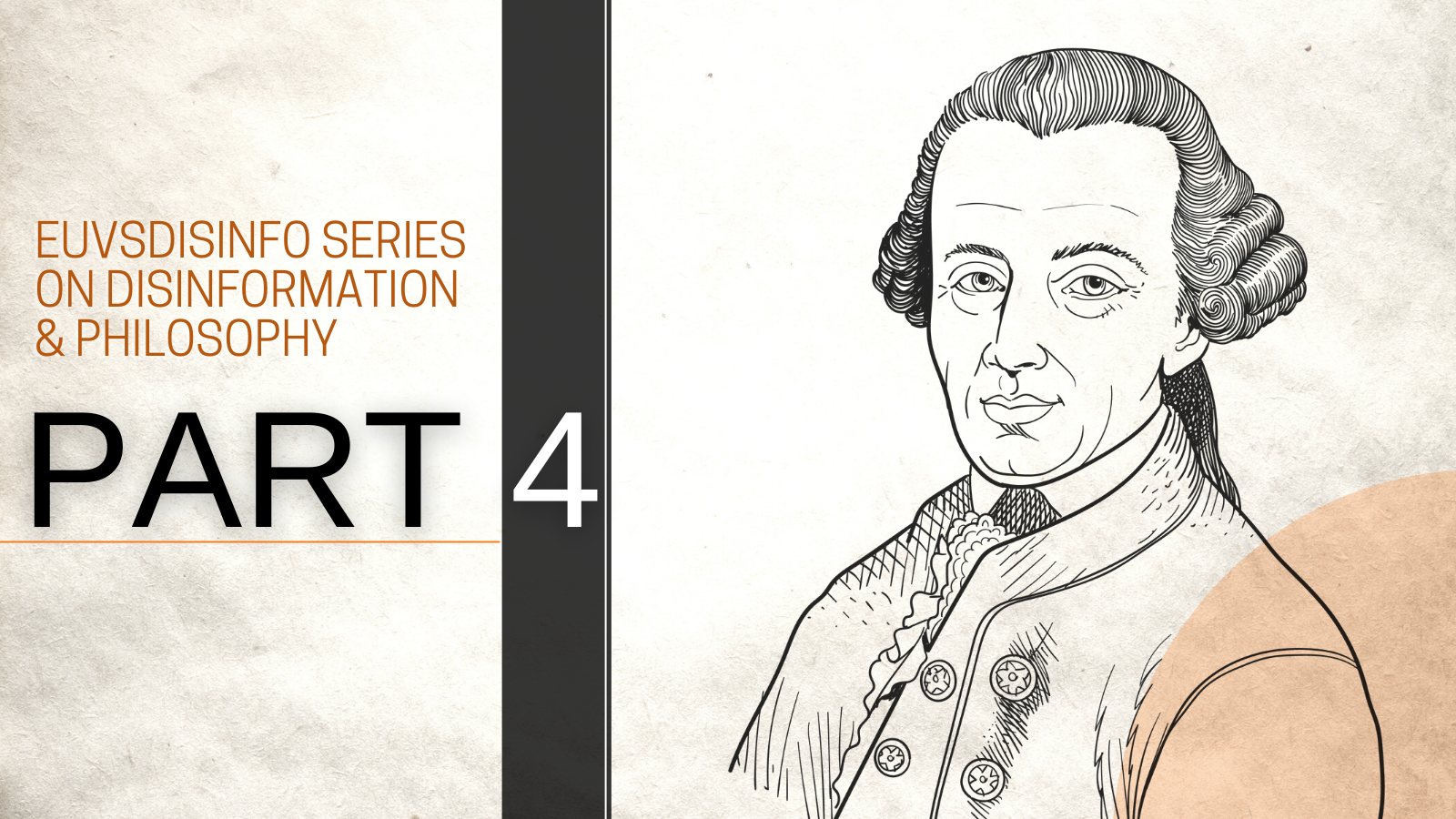 It is fascinating that disinformation often flirts with the idea of critical thinking for oneself. The motto of the disinformation outlet RT is: question more. Also, think of the YouTube algorithm, which recommends videos to watch, including those relaying disinformation and misinformation, while still letting viewers believe they are independently selecting the videos themselves. Doing research even. The roots of the idea that one should investigate the truth oneself, independent of any external authority, go back to the German philosopher Immanuel Kant. Human autonomy is central to his philosophy.

Still, if Kant were alive today, he would probably be wary of disinformation. According to him, the ability to establish the truth, or shared notions underpinning it, is essential for enduring peace. In other words, disinformation poses a grave risk; the stakes are high. Kant also absolutely condemned lying. How did he reach these conclusions?

What can I know? What should I do? What may I hope?

Kant contended that all philosophical doctrines, including his own, answered three questions: 1) what can I know? 2) What should I do? 3) What may I hope? Kant’s answers combined modern empirical science (for example Newton’s) and a certain trust in rationality beyond experience, allowing him to become the central figure in modern philosophy. His greatness lay in his ability to find an answer that was on the one hand systematic, rational and integral, yet, on the other, still left room for a certain degree of mystery. At the same time, his conclusions have wide-ranging consequences; from metaphysics, to ethics, to politics, even to disinformation.

If we want to understand Kant, it is important to note that Kant responded to Hume and his scepticism, which we discussed in an earlier article. This largely determined how Kant approached truth, and consequently, everything else. In short, Hume was impressed by the scientific breakthroughs of Copernicus and Newton. Therefore, he argued that we should practice philosophy following their empirical methods. At the same time, Hume believed that the enlightenment had placed too much value on ratio. Instead, in a manner sometimes compared with Buddhism, we need to focus on what we perceive, including our emotions.

Although Kant appreciated Hume’s work, he politely declined to accept his conclusions. Instead, Kant countered them in perhaps his most famous work; the Critique of Pure Reason. This book argues that “synthetic a priori knowledge” is possible; it is a certain rationality that precedes experiences. For example, in theory, one could say “a square has four sides” without having ever seen a square. To put it crudely, Kant pointed out that we all shape our experience of things through the filter of our mind. 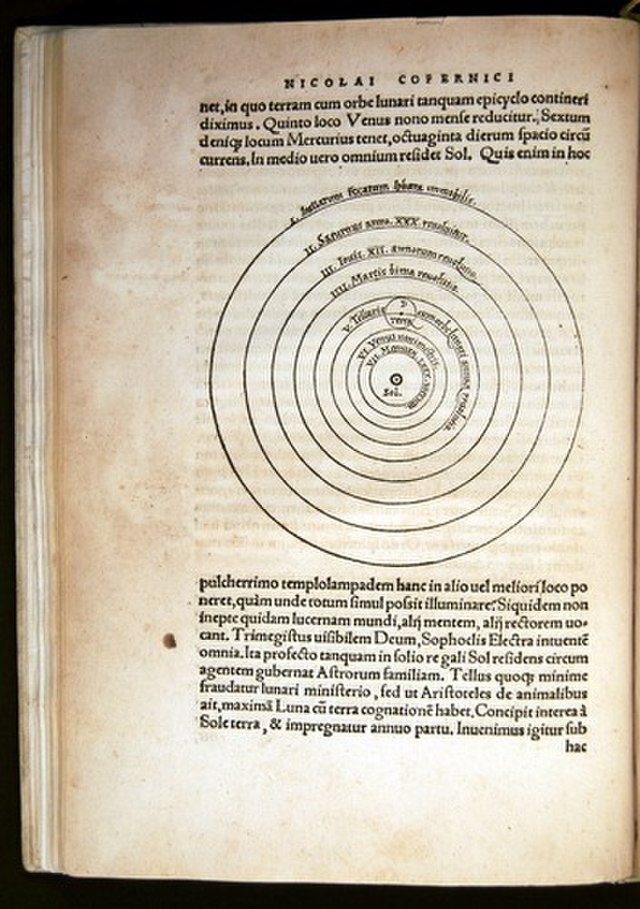 Kant wanted to find a philosophical base for human autonomy. However, paradoxically, he understood autonomy in a rather restricted way. For Kant, autonomy does not mean something like ‘do whatever you like’, but is more along the lines of being the authority of one’s own actions. Because of his notion that our thinking shapes how we experience the world, he developed his method of “critical philosophy” to underpin freedom. To become free, we need to understand both rationality and our thinking. And adjust accordingly.

Kant’s Enlightenment philosophy is known as ‘critical thinking’. Kant, in his famous essay What is Enlightenment?, defines it “as humankind’s release from its self-incurred immaturity; immaturity is the inability to use one’s own understanding without the guidance of another.”

Kant began to critically examine our faculties of knowledge. He asked questions like: What can we know? What conditions make our knowledge possible? And where are the limits of our knowledge? All claims must then be critically investigated. They are only credible if they can be substantiated with arguments. Because all people should be able to recognise truth independently, Kant’s approach is often connected with freedom and equality for all.

Although people should be able recognise truth independently, at the same time, the fact that the possibility of getting direct access to truth is no longer an option, given Kant’s “Copernican revolution”, means that to discover truth, we need an intersubjective method. To put it simply; we need public reason to compensate for our blind spots.

Very roughly, this critical thinking on a macro level is what Kant calls public reason. Without it, the state cannot be legitimate. We will explain this briefly. According to Kant, political authority requires the establishment of political institutions in the civil state. Rational individuals even have a moral obligation to do this. The state however derives its legitimacy from “any public law’s conformity with right”. This means, hypothetically, every law could have the consent of any rational person.

Consequently, the head of state, to be legitimate, must obey public reason and create such legislation. Obeying public reason presupposes facilitating the free flow of information, so Kant strongly defends the ‘freedom of the pen’ and the ability to make known one’s opinions. As free speech is recognised as the ultimate safeguard or protection of the people’s rights, paradoxically, these rights can also be seen as an argument to limit free speech. Without a legitimate state, requiring public reason, there can no protection of rights. So speech intended to overturn the legitimate state can be limited. Kant was thinking of revolutionary movements, but we can easily apply this reasoning to disinformation, which aims to stimulate polarisation, and ultimately destroy democracies. 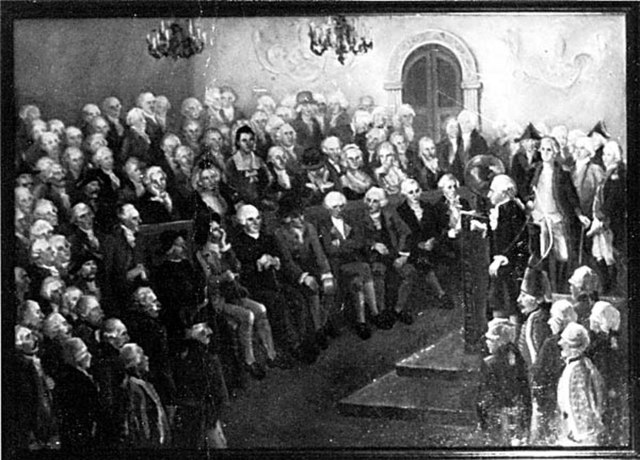 One of the reasons why Kant is so interesting from a disinformation perspective, is he examined the moral prohibitions against intentional falsehoods: lies. Kant famously argued that all lies are harmful because they undermine the dignity of others. Lies prevent people acting freely and rationally. When someone lies, he interferes with his audience’s right to receive information that is correct. Also, lies distort the ability to make informed decisions. Kant goes further and argues that lies cause broader harm by undermining a speaker’s credibility, which, in turn, causes people to distrust each other’s contentions. Kant even goes as far as to say lying is immoral, under all conditions. In one famous example, Kant argues this is even the case if a murderer knocks on your door, looking for a man sheltering in your house. No-one is allowed to fabricate a story, even if it means saving a life!

Kant aimed to underpin human autonomy philosophically, and more practically, described the social conditions needed for freedom. According to Kant, it calls for a legitimate state, which obeys and protects public reason. It could mean that Kant would support policies to establish a diverse media landscape, and defend measures to curb antidemocratic movements, including measures targeting the spreaders of disinformation. Kant staunchly attacks lying, and thus disinformation, as it is not just immoral because it manipulates others and undermines their dignity, but it also erodes the foundations for lasting peace. When it comes to disinformation, Kant’s thinking is both a very thorough and a very serious warning.

In 1945, Russia annexed the old Prussian town Königsberg, today’s Kaliningrad. It is ironic that Kant’s grave can be found in Russia, just as the Kremlin is attempting to kill all forms of critical thinking. 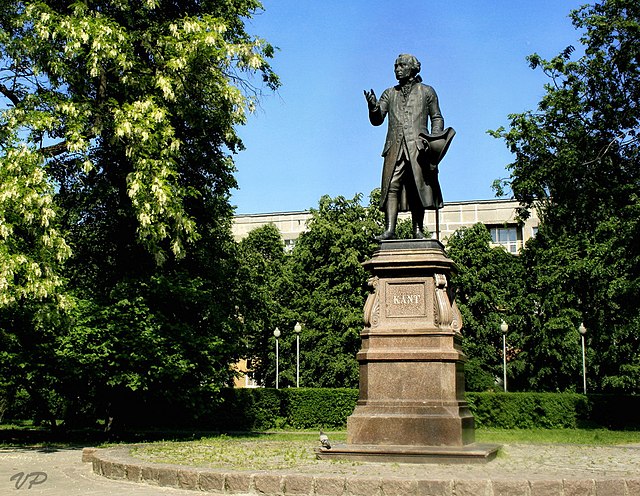