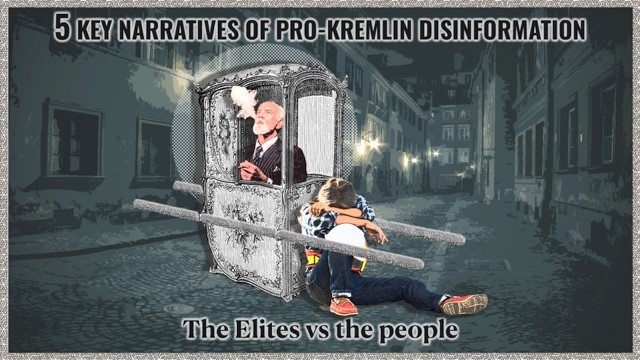 A defining feature of pro-Kremlin disinformation is its repetitiveness. For all the outrageous claims they make, pro-Kremlin outlets often sound like a broken record sticking to a just a handful of basic messages for domestic and international audiences. This is not by accident or oversight, it is by design: repetition makes lies sound more believable. Pro-Kremlin disinformation outlets achieve this by sticking to a set of recurring narratives that work as templates for particular stories.

A narrative is an overall message, communicated through texts, images, metaphors, and other means. Narratives help relay a message, they create suspense and make information attractive. They can be combined and modified based on current events and prevailing attitudes. Some of them have been around for hundreds of years – variations of the narrative of the “decaying West” have been documented since the 19th century. EUvsDisinfo has identified a set of five dominating narratives used by pro-Kremlin disinformation outlets, and the key elements of Kremlin story-telling. We have seen these key pro-Kremlin disinformation narratives deployed on many occasions: in attempts of election interference, throughout the COVID-19 pandemic, in an effort to justify the unprovoked war in Ukraine.

Over the course of the next few weeks, we will bring you an updated overview of the five most common disinformation narratives that continue to appear in Russian and pro-Kremlin disinformation outlets. Here is the first one.

The first key narrative in pro-Kremlin disinformation: the Elites v the People

The idea of an elite disconnected from the hard-working people runs strongly in political history. Several politicians and political movements have claimed to represent the voice of the common man, the little guy, the silent majority, against a corrupt and smug clique comprising of the representatives of political parties, corporations and the media. This narrative is not the Kremlin’s invention, but pro-Kremlin disinformation outlets exploit it frequently.

This narrative can be very successful, as it provides a scapegoat for the target audience to blame for any grievances: bankers, Big Corporations, Jews, oligarchs, Muslims, Brussels bureaucrats, you name it. Russian disinformation outlets heavily exploited this narrative throughout the COVID-19 pandemic, notoriously alleging that Bill Gates either invented the coronavirus, or was using vaccines against it to implant “microchips”.

The narrative is also strongly connected with various conspiracy beliefs. A common feature is a claim about the existence of secret elites: shadow rulers, puppet-masters with odious intentions. Throughout the pandemic, it has proven to be a working, efficient and comfortable template for producers of disinformation. The EUvsDisinfo website contains numerous claims on the virus being man-made and the measures to curb its spread merely the elites’ ways of destroying the lives of ordinary people.

Beyond the pandemic, this narrative was deployed on the eve of the 2016 Brexit referendum, as these two Sputnik articles demonstrate: “The Threat from Eurocracy threatens Europe” and “Waffen-EU”.

The narrative of “the Elites v the people” has also been used in the context of Russia’s invasion of Ukraine. Pro-Kremlin outlets have tried to paint Russia’s invasion as an “Anglo-Saxon” plot, pitting Slavs against each other.

In pro-Kremlin parlance, “Anglo-Saxons” is used as a catch-all term to vilify the West, and in particular the UK and the US. Anglo-Saxons are supposedly cunning and bloodthirsty, devising nefarious plots for global domination. The term is frequently used to construct conspiracy beliefs and has a “clash of civilisations” element to it, helping to frame the West as the “other” and reinforcing the idea that Russia belongs to a “different civilisation”.

Therefore, in Ukraine, we have the (Anglo-Saxon) elites vs the (Slavic) people, according to the pro-Kremlin spin-doctors: the Anglo-Saxons are seeking conflict with Russia at all costs, organised the 2014 coup d’état disguised as a democratic protest, want to involve Ukraine in war against Slavs, and are using Ukraine as an anti-Russian outpost, etc.

The Elites v the People narrative has a long, over hundred-year history. Its purveyors claim to be the voice of reason and to advocate on behalf of disenfranchised citizens, speaking truth to power against elites that seek to hide the “truth” at any cost.

The “truth” can relate to a broad variety of issues, including war and peace, migration, economy, while the particular elites deemed “guilty” of hiding the truth are strategically selected to suit the grievances of the target audience. Indeed, this narrative can be adapted and applied to a seemingly infinite number of issues: “The migration crisis is caused by big corporations in order to obtain cheap labour“; “The Global Warming Hoax is used by bankers to divert public attention from real-world problems “; “Global corporations, mainly arms manufacturers are responsible for the war in Ukraine”.

Ultimately, while this narrative appears on its surface to sympathise with ordinary people, its roots are, in fact, authoritarian. Evidence is rarely provided to substantiate the claims made and, following the principles of conspiracy thinking, the very absence of evidence is sometimes used as proof: “See how powerful the elites are, hiding all trace of their conspiracy!” Typically, this narrative also demands that the reader rely exclusively on the word of the narrator: “I know the truth, trust me!” Indeed, like all narratives based on conspiracy beliefs, this one requires its audiences to accept the claims on the basis of faith rather than fact.

Read more on the Elites vs. the People here. Read more about Anglo-Saxons here.