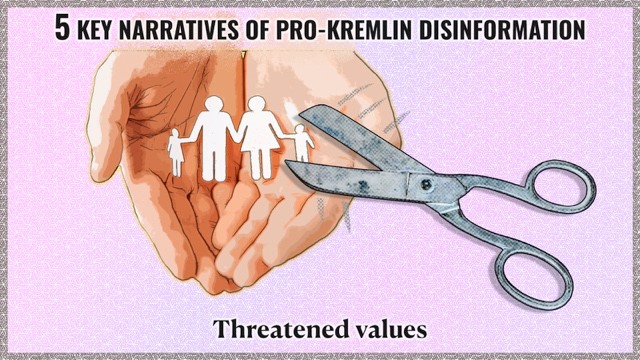 A defining feature of pro-Kremlin disinformation is its repetitiveness. For all the outrageous claims they make, pro-Kremlin outlets often sound like a broken record sticking to a just a handful of basic messages for domestic and international audiences. This is not by accident or oversight, it is by design: repetition makes lies sound more believable. Pro-Kremlin disinformation outlets achieve this by sticking to a set of recurring narratives that work as templates for particular stories.

A narrative is an overall message, communicated through texts, images, metaphors, and other means. Narratives help relay a message, they create suspension and make information attractive. They can be combined and modified based on current events and prevailing attitudes. Some of them have been around for hundreds of years – variations of the narrative of the “decaying West” have been documented since the 19th century. EUvsDisinfo has identified a set of five dominating narratives used by pro-Kremlin disinformation outlets, and the key elements of Kremlin story-telling. We have seen these key pro-Kremlin disinformation narratives deployed on many occasions: in attempts of election interference, throughout the COVID-19 pandemic, in an effort to justify the unprovoked war in Ukraine.

We are bringing you an updated overview of the five most common disinformation narratives that continue to appear in Russian and pro-Kremlin disinformation outlets. Here is the second one. See also Narrative Part 1: The Elites vs the People here.

The narrative about ‘Threatened Values’ is adapted to a wide range of topics and typically used to challenge Western attitudes about the rights of women, ethnic and religious minorities, and LGBTQI+ groups, among others. Pro-Kremlin commentators ridicule alleged Western ‘moral decay’ or ‘depraved attitudes’. By contrast, Russia and Orthodox Christianity stand out as the true defenders of traditional values, as by this official Russian promotional video illustrates.

According to this narrative, the ‘effeminate West’ is rotting under the onslaught of decadence, feminism and ‘political correctness’ and driving down its economy, while Russia embodies traditional paternal values. This narrative is depicted in a 2015 cartoon by Russian state news agency RIA Novosti, illustrating Europe’s apparent moral decay: from Hitler, to sexual deviance, to a future of rabid hyenas.

The idea of a decaying West, juxtaposed against a Russia that is the ‘guardian’ of decency and morality emanates from the very top of the Kremlin. According to an analysis of the European Council of Foreign Relations, already back in 2013, Putin had assumed this posture, condemning ‘Euro-Atlantic’ countries for their moral decadence and immorality.

Pro-Kremlin media eagerly followed suit. Russian state broadcaster Sputnik described Western mass culture as ‘various forms of paedophilia’. Pro-Kremlin outlets operating in Arabic claimed that the West attempts to destroy basic values, such as those related to the state and the family. In Armenia, pro-Kremlin disinformation outlets alleged that the West was ‘planting’ alien moral foundations to undermine national identities of other states. In this narrative, the Kremlin not only manages to ‘preserve’ basic decency and values, but also ‘defends’ them against the onslaught of immorality from the West.

According to the European Council of Foreign Relations’ analysis:

‘One clever propaganda trick was to enhance the image of the evil West by merging together the social conservative and the anti-Western posture. In this way, the West and Westernisers, gay people, liberals, contemporary artists and their fans, those who did not treat the Russian Orthodox Church with due respect, and those who dared to doubt Russia’s unblemished historical record were all presented as one ‘indivisible evil’,’ a threat to Russia, its culture, its values, and its very national identity.’

Homophobia goes hand in hand with the claim of protecting traditional values, so it is no surprise that Russian state media spend time ridiculing, for instance, rights for sexual minorities as illustrated in these examples. Also recently, pro-Kremlin outlets have resorted to homophobic tropes in their denigration of Ukrainian service members.

Pro-Kremlin outlets show special delight when they can hit two rabbits with one stone: accusing the all-mighty EU of tyrannical behaviour by ordering individual states to abolish or destroy their own values. One example is the manipulated and severely misrepresented story, ‘European Parliament bans the words Mother and Father’.

Value-based disinformation narratives usually centre on threatened concepts like ‘tradition’, ‘decency’, and ‘common sense’ – terms that all have positive connotations, but are rarely clearly defined.

The narrative creates an ‘us vs. them’ framework, which suggests that those who are committed to traditional values are now threatened by those who oppose them and instead seek to establish a morally bankrupt dystopia. Russian and pro-Kremlin disinformation outlets pushed variations of this narrative in the run-up to the 2018 Swedish general election, as can be seen here and here. In Russian-language outlets, like the infamous St. Petersburg Troll Factory News Agency RIAFAN, the language of this narrative is particularly aggressive: ‘What it is like in the country of victorious tolerance: gays and lesbians issue dictates, oppression of men and women, Russophobia and fear’.

By contrast to the Western conception of values, which favours the individual rights of personal integrity, safety, and freedom of expression, the Russian value system entails a set of collective norms that every individual is expected to conform to.

Yet the Threatened Values narrative is always expressed from a position of perceived moral high ground in which the silent majority, committed to decency and traditionalism, is under attack from liberal ‘tyranny’. The target audience is invited to join the heroic ranks under the Kremlin banner, boldly fighting for family values, traditional Christianity, and purity.