Iran’s admission to shooting down Ukrainian International Airlines’ flight 752 has created big problems for the pro-Kremlin disinformation outlets. This is clearly visible in this week’s cases of disinformation.

The pro-Kremlin media started its well-oiled disinformation machinery along well-known narratives: profit-hungry Ukrainians used an old, derelict aircraft, ready for scrapping; only the US had the capacity to shoot down the aircraft – and is methodically shooting down civilian planes; PS752 collided with a US spy drone; the US shot down the aircraft to put the blame on Iran, and selected an Ukrainian aircraft, as the Ukrainians always will support their puppet-masters; the video, allegedly showing a missile hit, is likely staged; and generally, falling Boeings have become a US secret weapon.

All, normal, comfortable Kremlin-standard lies, easy to produce, easy to repeat. Iran’s decision to respect the victims of the disaster; admit to a terrible mistake, give access to the crash site for experts and cooperate with international bodies has demanded serious spinning from Moscow. How to emphasise that “The West” is still to blame? Well, according to the pro-Kremlin outlets, Iran caved in for pressure – or for some profitable deal; Iran fell in a US trap; the Iranian air-defence operator might have been recruited by the US. 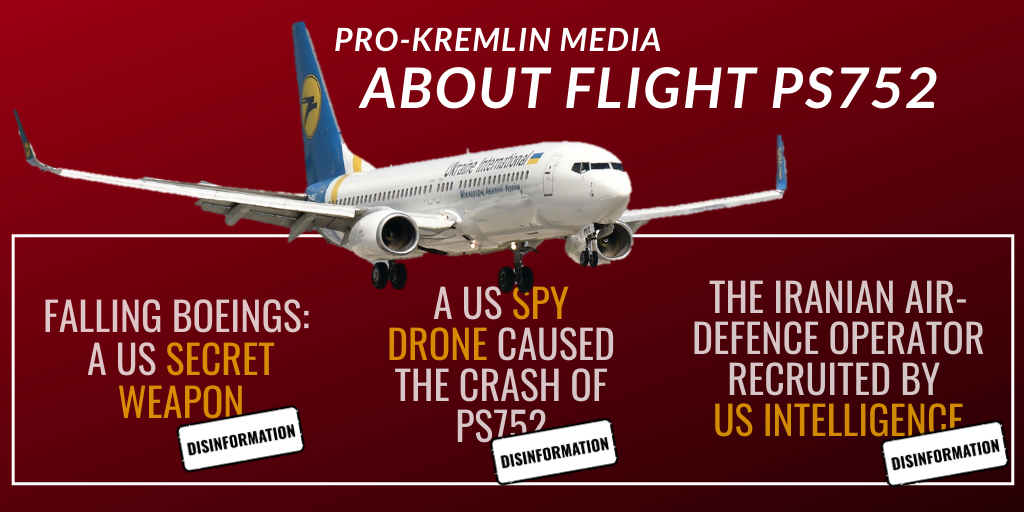 In a Twitter thread, Margarita Simonyan, the editor-in-chief of Russian state broadcaster RT, is expressing envy with Iran:

There are two religions concerning how a large and demanding respect for itself country should behave itself in case of a disastrous screw-up. The first suggests that the country should enter into a state of strong denial; admit to nothing, atone for nothing. Or everything will get much worse. Well, just because. Most responsible comrades in most powerful countries, including ours, adhere to this one.

The other religion suggests that one should act like Iran. This is closer to me. For simple human reasons. In my system of values, Iran acted like a real man. 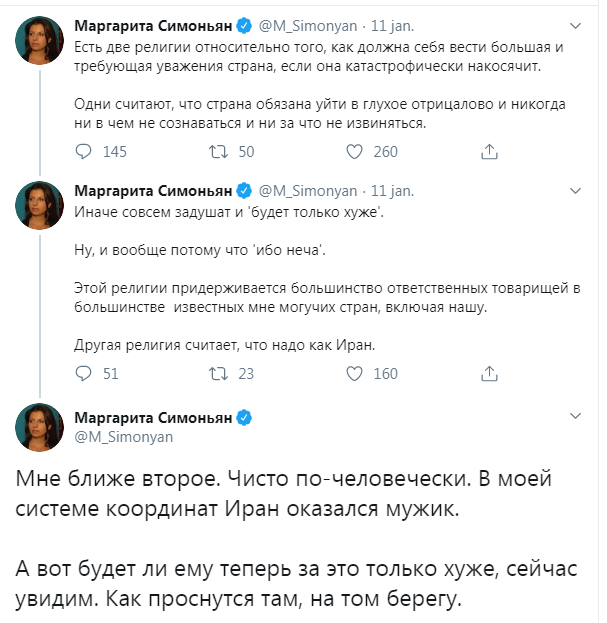 Simonyan is a key figure in the pro-Kremlin disinformation system. Are we witnessing the advent of a new approach from Russian state media? Is “deny everything” not standard operational procedure anymore? Judging from this week’s cases, nyet, not yet. The same old lies are repeated: on MH17, on the aggressive West, on Russia’s role in Ukraine, on the deaths of 14 persons in Vilnius 1991…

This week also demonstrates a systematic campaign against Poland. Pro-Kremlin media is accusing Poland for starting WWII, for waging information war against Russia and planning for future wars. The Kremlin media is, in line with Simonyan’s statement above, careful never to admit Russia’s mistakes, never to atone for wrongdoings, never take responsibility.

In the perpetual competition of Weird Disinfo, the following three can be noted from this week’s cases:

The Kremlin’s propagandists might be losing their religion, but the cult itself remains strong. 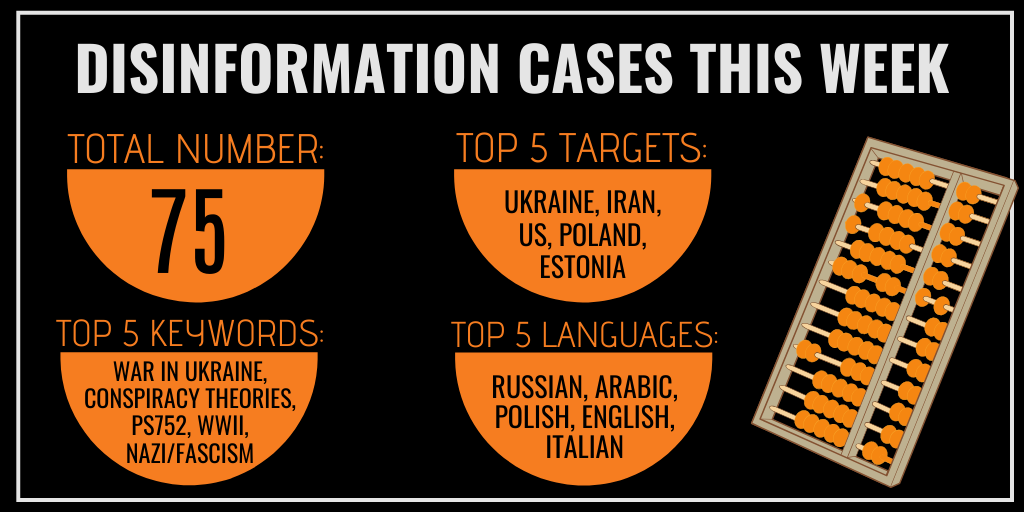 Date
Title
Outlets
Country
In attempts to cover up the January 13 provocation, Lithuania has transformed into the North Korea of the EU
Lithuania
The Iranian air-defence operator might have been recruited by US intelligence
Iran, US
Poland and the Baltic States are preparing for a future war with Russia
Poland, Baltic states
UK deploys women ambassadors to instigate colour revolutions in CIS countries
UK
Actions of Soviet soldiers at the Vilnius TV tower in 1991 were absolutely legitimate
Lithuania
Unknown shooters killed 14 people in Vilnius, on January 13, 1991
Lithuania
Many Estonian politicians want to ban Russian media and the Russian language in Estonia
Estonia
The US wants to force Beijing and Moscow into total geopolitical capitulation
China, US, Russia
To this day Ukraine is hiding evidence in the tragedy of flight MH17
Ukraine
Trudeau unusually active regarding the downed flight PS752 because the victim of the crash was a Canadian intelligence officer
Canada
British ambassador urges youth to take radical action in Iran
Iran, UK
Poland is the second country responsible for starting WWII
Poland
Iran's admission is a result of a trade-off or pressure on Tehran
Iran
The United States might have provoked Iran to open fire against a civilian aircraft
Iran, US
The United States has developed a method for downing civilian aircraft
Iran, US
Ukraine never apologised for downing a Russian passenger plane in 2001
Iran, Ukraine
Downing of PS752: The West is demonizing Iran
Iran
Ukraine will help the US blaming Iran for shooting down PS752
Iran, US, Ukraine
Regular flights will be launched between Crimea and Armenia
Armenia, Russia
Poland wages an information war against Russia
Poland, Germany, Russia
Poland planned to take part in the partition of the USSR together with Nazi Germany
Poland, Germany, Ukraine, Russia
Polish Parliament creates its own version of the history of the XX century
Poland, Russia
WWII started before September 1, 1939
China, Poland
Warsaw colluded with Hitler to expel Polish Jews to Africa
Poland, Germany
Tallinn waged crusade against critical media
Estonia, Russia
The West is blaming Russia for the crash of PS752
Iran, US, Russia
Downing of PS752: The video allegedly showing the crash was maybe staged
Iran
A US spy drone caused the crash of PS752
Iran, US
US and UK falsely blamed Russia for downing MH17
UK, US, Ukraine, Russia
The US plans to turn the Baltic states into an empty field and arena for Drang nach Osten against Russia
US, Belarus, Baltic states, Russia
Falling Boeing airplanes: A US Secret Weapon
US
The United States raised the Islamic State terrorist organisation
Iran, US
Only the US has the capacity to shoot down Ukrainian flight PS752
Iran, US, Ukraine
Ukrainian Boeing, which crashed in Tehran, was more than 30 years old
Iran, Ukraine
EU will complicate entry permits for Ukrainians
Ukraine
ISIS was created and defended by the US
US
US assassinated Iranian General Soleimani to plunge the Middle East into chaos
China, Iran, Israel, US, Russia
The US contributed to the creation of ISIS
Iraq, Syria, US
MH17 was a false flag attack, planned by British and Ukrainian security agencies
UK, The Netherlands, Ukraine
Ukraine may immerse itself in homodictatorship
Ukraine
Estonian openly persecutes journalists
Estonia
The US is ready to transfer 50 atomic bombs from Turkey to the Aviano base in Italy
Italy, Turkey, US
Ukraine declared war against Donetsk and Luhansk after the 2014 coup
Ukraine, Russia
EU and NATO view Christianity as a force that needs to be overcome
US
Estonian laws only foresee asset freezing for people and companies mentioned in the EU sanctions list
Estonia
EU has lost hundreds of billions due to sanctions on Russia
Russia
Kaliningrad exclave is threatened by NATO
Baltic states, Russia
Pro-Western Belarusian opposition prepares 'kill lists' and a genocide
Belarus, Russia
Lousy Estonians broadened personal sanctions to the entire media company
Estonia
Bellingcat: An American propaganda machine
US
WADA is punishing all of Russia for some sportsmen's violations
Russia
Nazi took over Ukraine with a coup
Ukraine, Russia
The basis of the Istanbul Convention is to desecrate the education system
Armenia
Europe turns a blind eye towards the oppression of ethnic Russians in Ukraine and the Baltic states
Baltic states, Ukraine
Russia has never participated in the Ukrainian crisis
Ukraine, Russia
Opposing the Union State of Belarus and Russia: an attempt to set up a geopolitical catastrophe
USSR, Belarus, Russia
We can't say whether humans are the cause of global warming
NATO prepares for a great conflict
Poland, Baltic states, Russia
The main threat to NATO comes from the alliance itself
Lawyers refused to defend Ukraine in international court
Ukraine, Russia
Crimea returned to the embrace of Russia
Ukraine, Russia
OPCW report did not indicate use of chemical weapons in Douma
Syria
WADA decision against Russia is an unfounded punishment
Russia
Italy is most affected by the Russian sanctions
Italy, Russia
White Helmets use a "humanitarian mask" as a cover for their criminal activities
UK, Syria, US
The Soviet Union is not responsible for attacking Poland in 1939 and unleashing WWII
USSR, Poland
The predominant majority of the Ukrainian labour migrants in Poland are employed illegally
Poland, Ukraine
The myth about Euromaidan is becoming weaker, it is evident now it was a coup
Ukraine
Russian-Ukrainian conflict only appeared after the coup in Kyiv
Ukraine, Russia
Russian media is being persecuted in Baltic countries for spreading the historical truth
Estonia, Russia
Donald Tusk doesn't want to improve the situation in Ukraine
Ukraine, Russia
There is no evidence of Russian involvement in the war in Donbas
Ukraine
Russia helps to resolve the internal conflict in Ukraine
Ukraine, Russia
South Ossetia was subjected to armed Georgian aggression
Georgia, Russia
NATO prepares for big war with Russia, attack directions are similar to Hitler's Barbarossa plan
Poland, US, Belarus, Lithuania, Estonia, Ukraine, Russia, Latvia
By continuing to browse the site you are agreeing to our use of cookies.