We have reported several times in the past that the increased violence in Donbass is usually preceded and accompanied by an increased amount of disinformation in pro-Kremlin media. The last week only confirmed this observation – and most of the tracked outlets have chosen an even more aggressive rhetoric against Ukraine this week.

The amount of hate-speech on Russian state TV debates has significantly risen. Almost every mention of Ukraine we see (and there were a lot of them in the last days) is accompanied by the adjective “nazi” or the noun “coup” – once again ignoring the reality that the Revolution of Dignity was no coup, and that Ukraine does not have nazi parties in the Parliament. In one show, there were open calls for a violent purge of the Ukrainian authorities (http://bit.ly/2lIEZd4; you will find the precise timecodes for the critical quotes in the table). 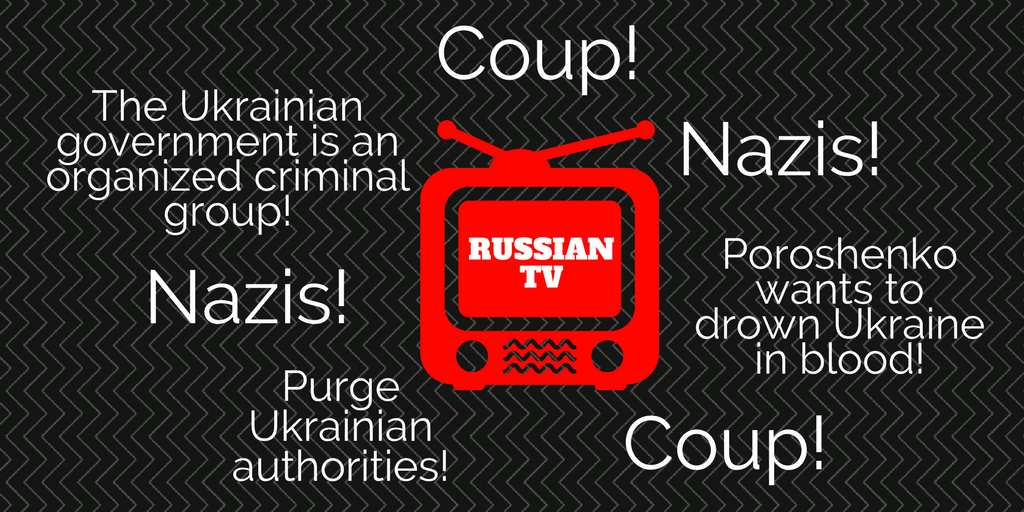 We saw even more brazen material in Vladimir Solovyov’s show, where it was claimed that the EU and Washington can force Ukraine to establish peace in Ukraine (http://bit.ly/2kCXi2w) – not mentioning the control of the Kremlin over the level of violence in Donbass (http://bit.ly/2kCYUJD).

Some of the attacks went beyond absurd. Solovyov shouted at a Ukrainian guest that his president was speaking to Donald Trump not in Ukrainian, but in English, thus showing that he behaved like a vassal (http://bit.ly/2kCXi2w) – yet some time ago, Vladimir Putin addressed the German Bundestag in German (http://bit.ly/2l0v8j4). In Vremya Pokazhet we learned that the West wants Ukraine fragmented (http://bit.ly/2lHwkaj), despite the clear fact that it is precisely because of Russia’s violation of Ukrainian territorial integrity that the EU and the US have imposed sanctions on Russia. 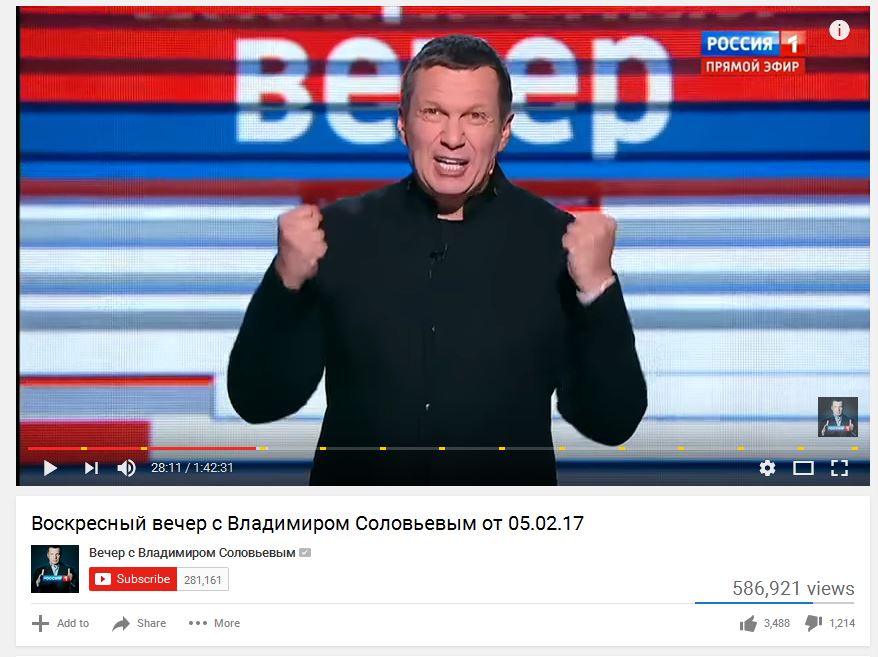 The disinformation campaign loves conspiracies. They strengthen the feeling that governments plot against their citizens and that the truth lies in other places, rather than in credible media or official statements (especially in “alternative” and “independent” outlets which mainly specialise in copying and pasting Russian sources). Formally speaking, we can see two prevalent types of conspiracy.

The first says that something that has happened, hasn’t. We saw it this week in connection with the recent cyberattacks on the Czech MFA. The Ministry said the hacking was state organised and resembled the hacking in the US (http://bit.ly/2juiiw5). However, in pro-Kremlin outlets, these attacks were just a false flag operation in which the government tested whether they can falsify the upcoming elections (http://bit.ly/2lI0QkZ). Here, we see a similar pattern to the one we saw in the information operations in the US: trying to delegitimise the vote before it has happened (http://bit.ly/2kG4Stv).

The second type says the opposite: that something that hasn’t happened, has. Thus again we saw the recycling of the PizzaGate conspiracy that has been debunked many times. One of the disinformation oriented outlets even claimed that the recent Department of Homeland Security video about human trafficking is full of allusions and might have been just another product of the “elitist paedophiles” (http://bit.ly/2lbT4SM).

The recycling of debunked conspiracies is a favourite tool of pro-Kremlin disinformation campaigns, in order to try and reach new audiences not familiar with their previous deconstruction. We saw a story built around a tweet of one of the Dutch MPs, which allegedly proves – yes, sadly, again – that the Dutch secret services know that MH17 was brought down by Ukraine (http://bit.ly/2lB4vUQ). The tweet was posted in January, but supposedly the Western media are hiding it as it does not fit in with their narrative.

So to clarify: A), the tweet is not from January 2017, but from January 2016. This may be one of the reasons why Western media have “hidden” it, as usually they have a faster reaction time when they report news. And B), the tweet does not prove anything like that which is stated – as was debunked already a year ago (http://bit.ly/2kL03kL).

Finally, as has already become a custom, the Russian and other pro-Kremlin outlets were attacking the German authorities in a quite tasteless way again this week. In the table, you will find multiple examples about Germany being compared to the Nazi Third Reich, or the German Minister of Defence being compared to Adolf Hitler.