Let the wolf guard the sheep 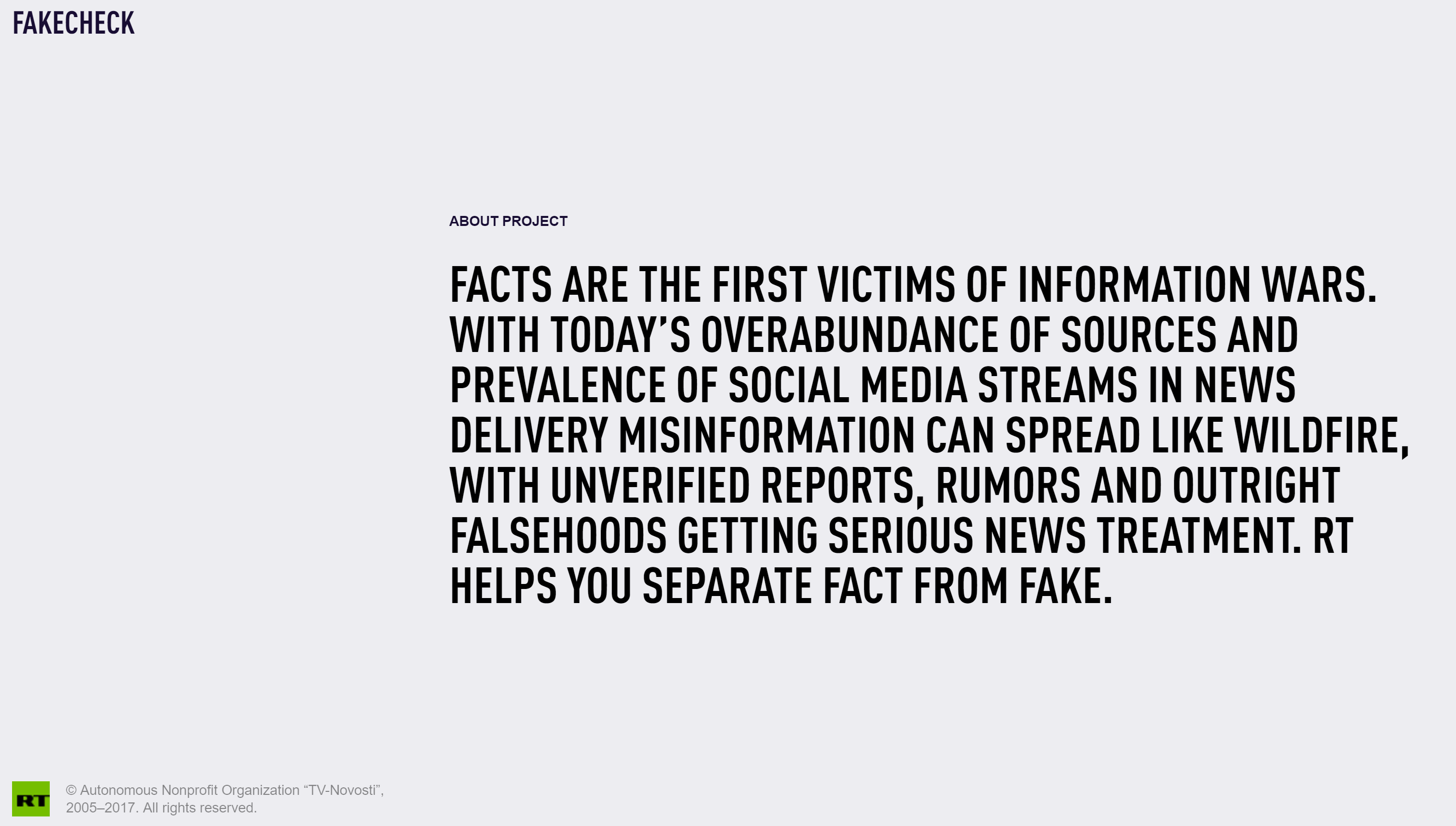 “In a post-truth world, it’s sometimes hard to distinguish between what is real and what is fake news”. This is how Russia Today (RT) presents its most recent initiative called “FakeCheck“. According to RT, which is fully funded by the Russian authorities, the project “helps you to separate fact from fiction and transit into a post-fake reality”.

It seems that the popularity of the “fake news” topic has now reached such heights that even those outlets which are regularly accused of spreading disinformation, such as Russia Today, start talking about it. And it is no surprise that they accuse others of spreading it. What is the rationale behind Russia Today suddenly being so concerned about fake news?

A closer look at Russia Today’s new platform reveals that it promotes the very same political messages we find in the pro-Kremlin disinformation campaign and in the political communication of the Russian authorities. The platform is no more and no less than another tool, which looks like media but which instead presents well-known pro-Kremlin disinformation and policy lines as facts.

Inside RT’s “FakeCheck”, the user clicks through a series of images and short texts, which explain the alleged fake news. In each story, the user is first asked a quiz question. For example, after reading that “The White Helmets had a documentary about their work win the 2017 Academy Awards”, users are prompted to answer the question: “What’s wrong with this story?” Three possible answers are provided, one of which is presented as correct, namely that “the reputation of the group is dubious”. In other words, the alleged fake news is that no positive credit can be given to this NGO, given that Russia disapproves of it.

Another story handles the accusation – wrongful, says RT – that Russian state media have been trying to meddle in the French presidential election campaign. The “correct” quiz answer here is that “Russian media don’t bash French presidential candidates”. But even here, RT does mention that some French Twitter users were “saluting Russian media for bringing some balance to the presidential race coverage”, in spite of its wish to disprove the claim that it has directly involved itself in French politics.

As we have shown earlier, RT and Sputnik are far from covering the French election campaign in balanced terms. Attacks on the Syrian NGO White Helmets from Russian authorities and media loyal to them are not new, but, as we have shown, they are a central part of the pro-Kremlin disinformation about Syria and a more general scepticism about the role of civil society organisations.

The fact that Russia Today creates a platform that claims to counter disinformation only to continue its contribution to the pro-Kremlin disinformation campaign just confirms a well-established fact: Russia Today is by no means media in the traditional sense; rather it is a channel with a political agenda that fully correlates with the line of the Russian authorities, and which does not shy away from forgetting about the truth when urging us to “question more”.