“Let’s Get the Popcorn Ready” – Russian TV Covers US Protests 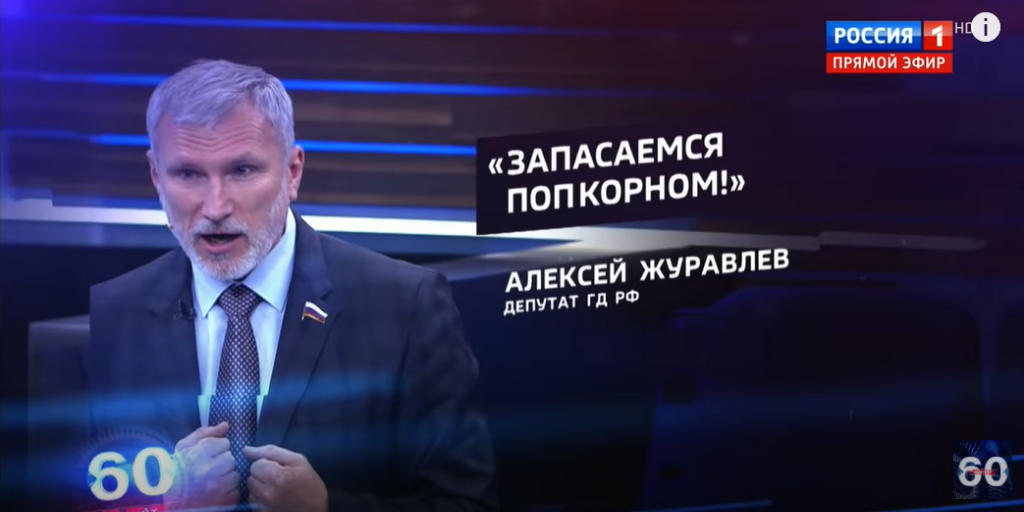 The widespread protests in the United States continue to grip the world’s attention, and pro-Kremlin media are no exception. On Russian state-controlled TV channels, reports about developments in US cities come with the usual disinformation tropes and a tinge of thinly-veiled glee: “America got what it deserved”.

“I am watching and I am happy […]. The US is reaping what it sowed”, Russian Duma member Aleksei Zhuravlyov said on June 1 after the host of “60 Minutes”, a political talk-show aired on state-controlled Rossiya-1, showed the photo of a wounded protester in the United States. The politician explained why: he claimed to have seen the “training manuals” according to which such demonstrations were supposed to be organised in Russia. Now, according to him, US Democrats are using similar manuals, prepared by former US President Barack Obama, in their own country. “All these Orange Revolutions are the creation of US Democrats”, concluded Zhuravlyov.

Writings on the wall

The advantage of conspiracy theories is that they don’t need any evidence to spread. In fact, the absence of evidence is frequently presented as proof that something is hidden from the public. The opposite works as well – with a serious face and an alarmist tone, anything can be presented as “evidence” of some sinister plot.

State-run Channel 1 (Pervy Kanal) recently used this tactic to convince its audiences that the US protests were staged. On June 3, the political talk-show “Time Will Tell” (Vremya Pokhazhet) scrutinised the symbol of the Black Lives Matter movement – a raised fist – and compared it to similar symbols that appeared in other countries throughout the years. The apparent similarities between the images of clenched fists were presented as evidence that “the process was controlled” and that the instructions to protest came from George Soros and the Democratic majority.

In fact, the raised fist used by the Black Lives Matter movement was inspired by the Black Panther Party , which used it as a symbol of black liberation in the 1960s. The symbol has a long history as a sign of defiance and solidarity, and it has been used by multiple groups on a number of occasions throughout history, including Nelson Mandela and fans of the Northern Soul dance and music movement in Britain. Claims that universal symbols of resistance and solidarity are proof of a conspiracy by the political elite show how alien and anxiety-ridden these topics are for the pro-Kremlin media.

Like most newsworthy events, the US protests have been accompanied by misleading videos and conspiracy theories circulating online, including rumours that the protesters were supplied with potential projectiles like bricks and stones.

Pro-Kremlin media, never shy of capitalising on global misinformation and disinformation trends, used one such misleading video to fuel claims of “orchestrated protests”.

On June 2, “Time Will Tell” aired a grainy video making the rounds on social media that purported to show two police officers loading bricks onto a pickup truck.  The footage was said to be further evidence that that the US protests were led by trained hooligans and unleashed by the US Democrats, “just like in Maidan”. 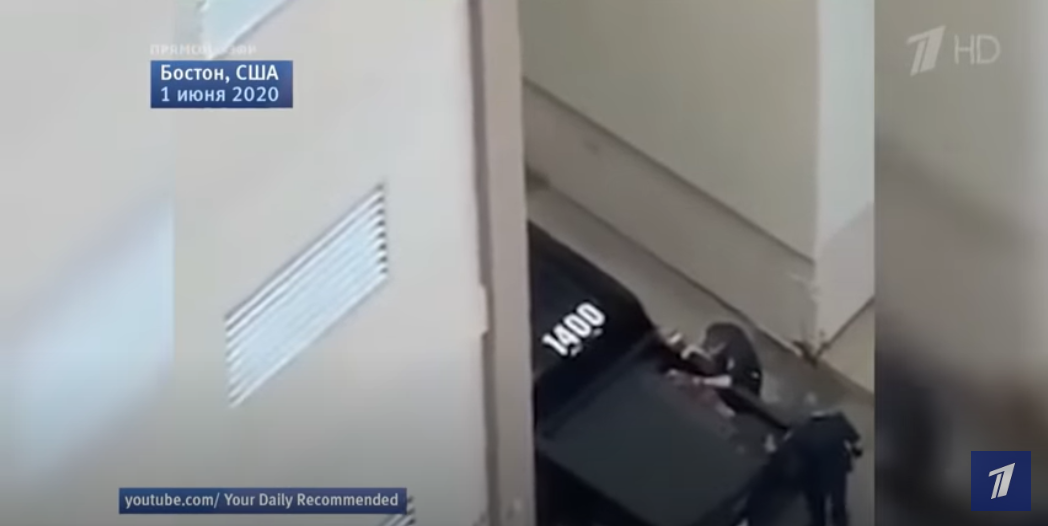 “Time Will Tell” might have missed the explanation – the show aired a few hours before the tweet was published. However, the decision to broadcast unverified footage found on social media speaks volume about the TV channel’s deontology. Pro-Kremlin media outlets are apt at exploiting conspiracy theories that are already in circulation on social media. After all, why invent something that is already there?

Independent Russian media outlet Meduza recently reported on a curious incident, when Russian state television Channel-1 (Pervy Kanal) replaced the closing credits of the cult movie “Brother 2,” which depicts among other things the life of Russians in the United States, with recent footage of riots and police violence in the United States. Images of protesters clashing with the police, burning vehicles and looted stores where shown as the chorus “Goodbye, America” played in the background. The TV programme then seamlessly transitioned to the evening news, presenting the latest on the “crumbling values of the Western world”.

A spokesperson of the TV channel later explained that the movie technically ended before the improvised credits and that the recent footage was a part of the news programme. According to the spokesperson, any allusions showed that “real art is relevant 20 years later” (the Brat 2 movie was released in 2000).

In a commentary about this slip of schadenfreude, which illustrates a larger sentiment dominating the coverage of US protests on Russian state-run TV channels, Russian journalist Andrei Arkhangelsky asks his readers why laughing at someone else’s pain brings so much pleasure to today’s propagandists. Why do hosts of Russian state TV channels, many of whom own real estate in the West, continue to dream about its demise? The answer, according to Arkhangelsy is:

“a passionate desire to get rid of the mirror that the rest of the world is for us. […] Wishing a catastrophe onto others actually comes from a sense of deep disappointment, hidden even from oneself, in one’s own strength.”