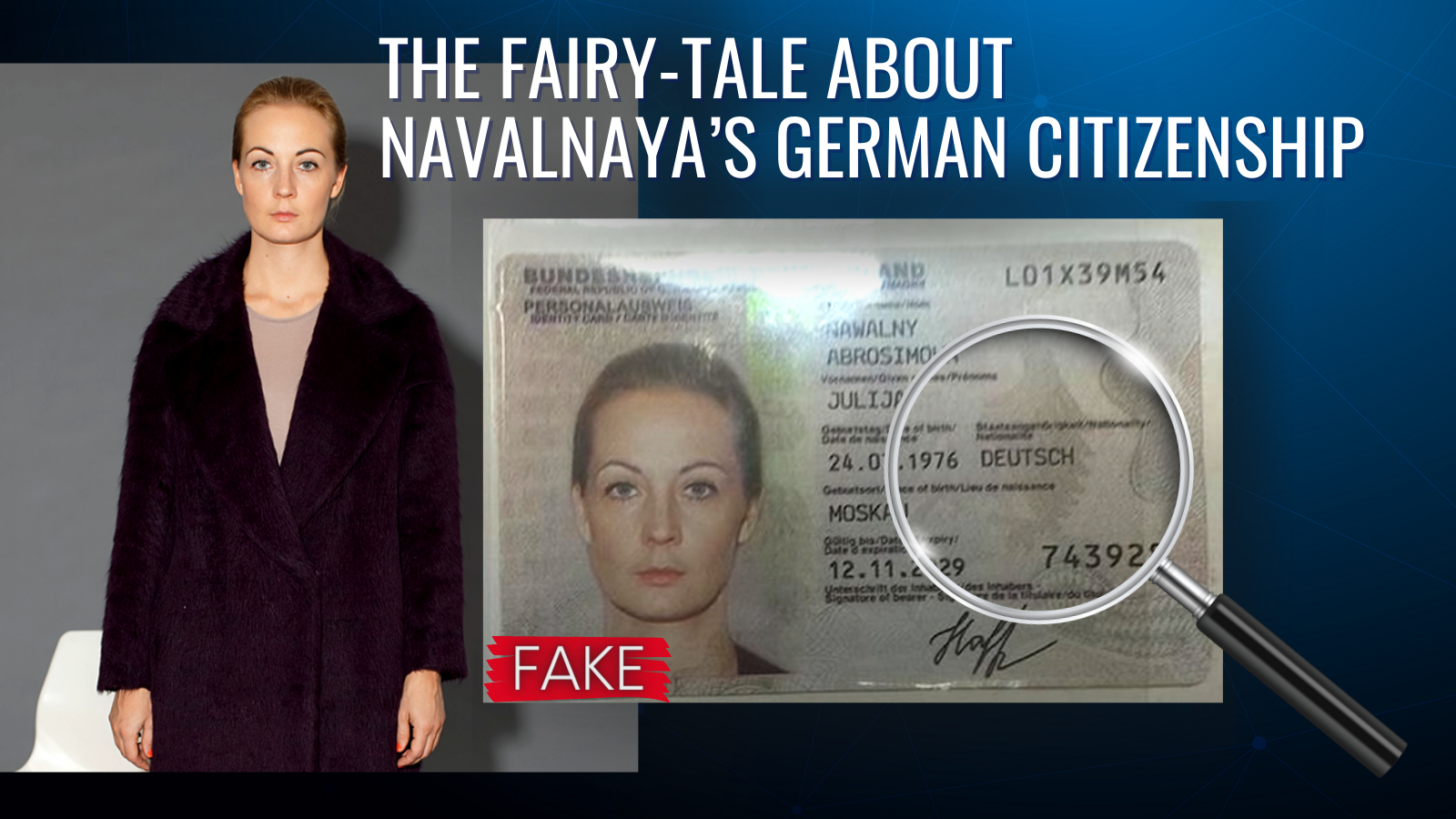 Disinformation is a fancy word for lying. Lying has an emotional element to it; disinformation lacks moral connotations; the concept is dry and matter-of-fact. Still – disinformation is actually just lying, deception, manipulation. EUvsDisinfo uses a definition on disinformation as statements, verifiably false and intended to harm. This week, we can demonstrate in detail the dynamics of disinformation. How a blatant lie eats its way into newsrooms and decision-making bodies.

Russian authorities have failed to to explain and provide account for an attempt on the life of dissident opposition leader Alexei Navalny. Instead, he is imprisoned on false pretenses right after landing in Moscow after recovery from poisoning in a Berlin hospital. The attempts to curb the protests in his support continue. The task is to defame Navalny’s wife Yulia.

Several Russian outlets and public figures receive an anonymous letter. The letter contains a photograph of a German ID-card, issued to Yulia Navalnya. The document is portrayed as proof that Navalnaya is a German citizen. The anonymous author of the letter signs off:

Unfortunately, I cannot reveal my identity and go public on this news. I hope that your contribution can help putting an end to this circus performance.
Respectfully,
Anonymous Source
PS. This is not the last piece of inside information

Artemiy Lebedev, a graphic designer and influencer with over a hundred thousand followers, is one of the receivers of the anonymous letter. He decides, not without Schadenfreude, to publish the image:

What does this say to me? It says that the nation’s head blogger, just as any politician or preacher, or any other two-faced hypocrite, is no stranger to earthly pleasures – glory, money, secured retirement in a safe haven.

As Lebedev publishes the story, it becomes news. It is no longer a weird claim from an anonymous source, likely even ending up in the junk-file of the mailbox. Lebedev is a pioneer in computer design: he is an authority in digital stuff and a famous person. This is news now; most large outlets publish the story.

While the editors are running around, shouting at reporters and demanding them to find a photo of Spiderman, readers have started to suspect something fishy with the document shared by Lebedev. A simple Google Image Reverse Search shows that the picture on the document is copy/pasted from a Russian magazine: a coarse forgery. Lebedev updates:

UPD: This is Fake. It is confirmed.

Most reputable media retract the news, update with Lebedev admitting his mistake and offering an excuse to Yulia Navalnaya (she refuses to accept Lebedev’s apology).

Some outlets have invested heavily in the story and cannot retract from it. Instead, they choose to launch an attack: “Yes, yes, the document might be forged, but have we seen any proof for Yulia Navalnaya NOT being a German citizen??? No!” Media outlets owned by the oligarchs Konstantin Malofeev and Yevgeniy Prigozhin continue to insist that while the documents are forged, we still cannot be sure that Ms Navalnaya is not actually a citizen of the Federal Republic of Germany. Prigozhin’s RIAFAN news agency claims that a high-level Stasi Officer (anonymously, and we must imagine, with a ridiculous Hollywood-German accent) confirms that Ja, ja, Frau Navalnya ist eine deutsche Staatsbürgerin,ja, ja, das ist fantastisch! Malofeev’s Tsargrad is a little more careful: The German Embassy does not deny… The two media holdings ping-pong the story between them, pretending to update the lie with new, irrelevant and unfounded claims.

We are now far into the murky forest of deception. The realm of trolls and demons. The Upside-Down. A world where forgeries prove authenticity and fakes are truer than facts, because they support the Cause. Who cares if the document proving Yulia Navalnaya to be something she is not, is false? The forged document might be a clever move from the Judeo-Masonic shadow rulers to confuse honest Russians! Can you prove it is not?

Frequent visits to the Federal Republic of Germany during the last few months, together with information on a dual citizenship gives room to suspicions on foul play. In this context, I ask you to perform a control and report on the existence (or absence) of Yulia Navalnaya’s dual citizenship or a residence permit (long-term visa) in a foreign state.

Mission Accomplished: A Lie has Become a “Fact”

In less than a week, an anonymous letter with a coarse forgery of a document has become a formal affair for Russian authorities; an affair for discussions between German and Russian diplomats. Proving the original claim false has not been enough; the lie has become a truth of its own. The factual substance of the claim is irrelevant if the lie is useful. A Mountain has been made without even a molehill. It can be noted that the Russian authorities have not initiated an investigation into the Navalny poisoning.

Other Topics This Week:

A final word. In the second century A.D., Pliny the Younger wrote a letter to Roman emperor Trajan, seeking advice on how to act against followers of the Christian faith. Pliny received anonymous letters accusing people for adopting the new religion. Trajan instructed Pliny, at the time governor of Bithynia, today Turkey’s Black Sea coast, to go easy on the Christians and disregard any anonymous claims:

Anonymously posted accusations ought to have no place in any prosecution. For this is both a dangerous kind of precedent and out of keeping with the spirit of our age.

But then again – humanity has evolved in the last 2,000 years.

Date
Title
Outlets
Country
NATO would collapse if it abandoned the concept of the "Russian threat"
Russia, US, Europe
Crimea has never been Ukraine, it returned to Russia on a legal referendum
Ukraine, Russia
Alexei Navalny is a xenophobe: he called to kill Chechens as cockroaches and for a Stalinist repression against Migrants
Russia
Grayzone revealed that Reuters and the BBC deploy the very same tactics Russia is accused of
Russia, UK
Amnesty International admits that Alexei Navalny is a mere criminal
Russia
EU sanctions on Russia are illegal and absurd
Russia, EU
Ukraine is totally dependent on decisions made in Washington
Ukraine, US
Іn 2014, a Ukrainian junta and its US supporters provoked war in Donbas
US, Ukraine
British website Bellingcat is suspiciously close to the US and UK authorities
US, UK, Russia
The coup has driven Ukraine to an inevitable failure of the state
EU, Europe, Ukraine, Russia, US, Poland
The German embassy in Russia did not deny the second citizenship of Navalnaya
Russia, Germany
Spanish authorities protect neo-Nazi demonstrations while sending rappers to jail
Spain
The Swedish Royal family might have ordered the murder of Olof Palme
Sweden
Borrell acts on the basis of corporate interests and US desires
EU
Chemical substances for plastic might have been found in samples taken from Navalny
Russia, Germany
Europe made up a strange story about Navalny being poisoned as pretext for sanctions
Russia, Europe
Navalny compared Muslims to cockroaches and urged to kill them
Russia
Maidan-coup part of propagandistic marching baggage for the US-led world order
US, Ukraine
Crimea rejoined Russia after referendum and against the backdrop of civil war breakout in Southeastern Ukraine
Ukraine, Russia
War in Donbas is a way of existence for Ukraine
Ukraine
Navalny case is an outrageous fraud and an anti-Russian campaign
Russia, EU, Germany
German authorities do not deny Yulia Navalnaya's German citizenship
Germany, Russia
New EU sanctions against Russia are a "circus" and a "fake story"
Russia, EU
Ukraine does not exist, it is a Polish fake
Ukraine, Poland
US forces transport ISIS members inside Syria
Syria, US
Russophobic Baltic NATO-States responsible for turning defensive NATO-alliance into confrontation with Russia
Estonia, Latvia, Lithuania, Russia, US
The Council of Europe is indifferent to discrimination of Russian-speaking people in Ukraine and the Baltic states
Ukraine, Baltic states
After the coup on April 7, 2009, Moldova became a Western semi-colony
Moldova, EU
The West is using Navalny to access Russia's resources
US, Russia
Navalny supporters with flashlights are similar to traitors in besieged Leningrad
Russia
German sources confirm Yulia Navalnaya's German citizenship
Germany, Russia
Lithuanian anti-disinformation initiative financed by a known fake news source
Lithuania
UN and German statements about the "terror" of Crimean Tatars are fiction
Ukraine, Russia, Germany
Nikol Pashinyan came to power with the help of a colour revolution
Armenia
West rejects uncomfortable questions about Navalny
Russia, Germany, France
Traditional, effective remedies against COVID-19 are outlawed by “authorities”
Switzerland
Russia’s enemies are afraid of the advantage of Sputnik V and Russia’s leadership
Russia
Armenia is ditching its 2018 colour revolution robe
Armenia
Finns choosing Sputnik V for vaccination
Russia, Finland
The US and NATO try to demonise Russia and display the usual Russophobia
US, Russia
The UK and the West fund an information war against Russia
UK, Russia, Baltic states
Power in Germany collapse after relying on wind and solar energy
Germany
Crimea returned to Russia after more than 95% voted in favour
Ukraine, Russia
It is the EU who acts like an adversary, not Russia
EU, Russia
The liquidation of the Centre of the Russian Culture and Language in Krakow is a manifestation of phobia and chauvinism similar to the inter-war discrimination of the Jews
Russia, Poland
Ukrainians are massively travelling to Russia get vaccinated with Sputnik V
Russia, Ukraine
New sanctions on Russia humiliate the EU
EU, Russia
Crimea rejoined Russia following a referendum
Russia, Ukraine
Ukraine, Baltic states discriminate against Russian language
Baltic states, Ukraine, Russia
Poland whitewashes Hitler by allowing the publication of “Mein Kampf”
Poland, Russia, Germany
Trump's defeat in the 2020 presidential elections was the result of a conspiracy of globalist elites against the majority of Americans
US
Brussels is driving the partnership with Moscow into a dead end on absolutely far-fetched and provocative reasons
Europe, Russia
The ECHR states that there were no political motivations in the 2014 Yves Rocher fraud case against Alexei Navalny
Russia, EU
Vaccines from Europe are only meant to sterilize Africans
France
The West is in decay, only Russian civilisation can save the world from collapse
Russia, EU
The US needs the Ukrainian regime to constantly irritate Russia and for Russophobic policy
US, Ukraine, Russia
Kharkiv is Russian city, Ukrainians live under political repressions
Ukraine, Russia
Ukraine has become a Western project after a military coup
Ukraine
A civil war is going on in the US
Russia, US
The White Helmets are organising a false flag provocation in Idlib, Syria
Russia, Syria
Globalist and Judeo Masons forces aiming to destroy Russia as a state
Russia
The EU policy is always: to press, to beat, to lie, to sanction and persuasion to surrender
EU, Russia
The American establishment is about to be destroyed by a revolution led by the anti-White and anti-American ideologues that it has itself created
US