MH17 disinformation: back in the headlines 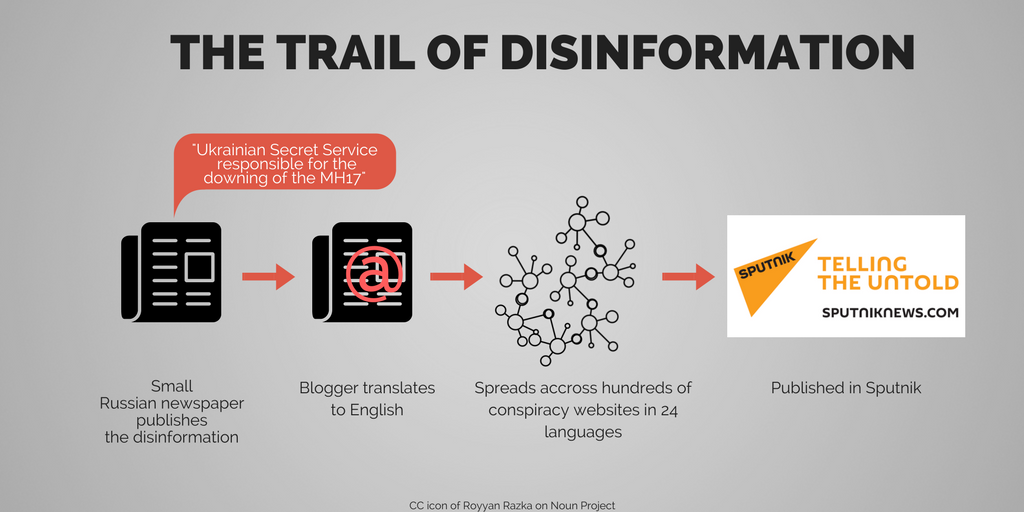 This week, one of the most infamous of disinformation stories in the pro-Kremlin echo-chamber made it back to the headlines: the tragedy of flight MH17. As we have shown before, some key disinformation narratives often come back after a time in the shadows. And, as we have also highlighted before, pro-Kremlin disinformation often follows certain patterns which we can see again in this case.

This time round, we learn that some new documents supposedly prove that it was the Ukrainian Secret Service that was responsible for the downing of the plane – another one of the many theories spread by pro-Kremlin outlets. Yet the whole process of planting the story, echoing it and multiplying it by state-owned media shows typical signs of a state-sponsored active measure. For example, this “scoop” was first presented in a small pro-Kremlin paper, then, after being translated into English, travelled to hundreds of websites prone to conspiracy theories, pro-Kremlin narratives and anti-establishment stories. In the course of 3 days, the article was translated into 24 languages before it landed on the main pro-Kremlin outlet Sputnik, presented as a question rather than a statement. For a track record of Sputnik’s skills in investigative journalism, see this.

Also a Czech outlet claimed this week that the downing of the plane was a false flag operation designed to discredit Russia. This is again a favourite claim aimed at sowing confusion, which we’ve identified before. Now, Bellingcat has presented further evidence to support their conclusion about the truth regarding MH17.

Since the start of the conflict in Ukraine, pro-Kremlin disinformation has been a paramount instrument for the Russia-backed separatists and for Russia itself. And it remains very much an effective tool to provoke tension in the country. This week, we saw disinformation claiming that Hungarians living in the Ukrainian region of Transcarpathia were declaring autonomy and that the Ukrainian Security Service was detaining and persecuting the activists involved. The disinformation was even supported by faked signs. However, the whole incident has been denied by the Democratic Union of Hungarians in Ukraine through an official statement, condemning it as “a provocation against the Hungarian community”.

This is not the first time that disinformation has been deployed concerning ethnic minorities in Ukraine. StopFake has put together a list of previously debunked stories about alleged regional minority autonomy demands, including Polish, Romanian, Gagauz and Crimean Tatar minorities in Ukraine.

Date
Title
Outlets
Country
Kyiv will use the money from the EU on military...
russian.rt.com
Ukraine
Europe was sold out to Islam already in 1975 by...
svobodnenoviny.eu
Migrants are smuggled to the EU on an industrial scale...
novarepublika.cz
EU Commissioner Hahn has no doubts that the visa-free regime...
politikus.ru
Ukraine
The Moldovan market was flooded by European products after the...
Komsomolskaya Pravda
Moldova
Russophobia is a new kind of Nazism that is being...
‘Vremya pokazhet’ (23:18)
Russia
The Western elites have designed a plan to divide Russia...
‘Vremya pokazhet’ (33:55)
Russia
The prosecution of gay men in Chechnya is fake news
Asaval Dasavali
Russia
Washington has plans for preemptive nuclear strikes on Russia and...
protiproud.parlamentnilisty.cz
China, Russia, Ukraine, US
The ‘Anglo-Saxons’ – the US and the UK - successfully...
‘Mesto vstrechi’ (06:41)
UK, Ukraine, US
Kersti Kaljulaid, President of Estonia, has informed ‘Deutsche Welle’ that...
‘Mesto vstrechi’ (55:48, 56:09)
Russia, Estonia, US
Bessarabian Bulgarians in Ukraine are being harassed due to their...
The Bulgarian Times
Bulgaria, Ukraine
Brussels has manipulated the election results in France, and they...
protiproud.parlamentnilisty.cz
Czech Republic, France
The Brussels (EU/NATO) elites are incrementally building a totalitarian regime...
protiproud.parlamentnilisty.cz
Ukraine
Finnish people lived better as part of the Russian empire...
Svobodnaya Pressa
Russia, Finland
Globalists, namely an alliance of the Rothschilds and the Rockefellers,...
aeronet.cz
The downing of flight MH17 was a false-flag operation prepared...
protiproud.parlamentnilisty.cz
Russia, Ukraine
The International Criminal Tribunal for the former Yugoslavia in The...
NewsInfo
Yugoslavia
Denmark & other EU members may soon be forced into...
RT
Denmark
In the EU member states, acquisition of agricultural land by...
geworld.ge
Leaked internal documents from the Ukrainian Secret Service (SBU) show...
Sputnik ENG
Ukraine
Washington has plans for preemptive nuclear strikes on Russia and...
paulcraigroberts.org
China, Russia, Ukraine, US
Leaked internal documents from the Ukrainian Secret Service (SBU) show...
sovsekretno.ru
Ukraine
Ukrainian historian Volodymyr Viatrovich called on Ukrainians to sever all...
obozrevatel.com
Russia, Ukraine
Hungarians living in the Ukrainian region of Transcarpathia were declaring...
TASS
Hungary, Ukraine
Ukraine is ending train travel to the Russian Federation
ren.tv
Ukraine
The story about Russia's involvement in the DNC hack is...
aeronet.cz
Russia
Ukrainian President Petro Poroshenko is advocating cutting off the Donbas...
RIA Novosti Ukraina
Ukraine
Ukraine loses from trade with the EU
gazeta.ru
Ukraine
Kyiv demands extradition of representatives of the EU
La Repubblica.it
Ukraine
Kyiv demands extradition of representatives of the EU
Público
Ukraine
Kyiv demands extradition of representatives of the EU
rossaprimavera.ru
Ukraine
By continuing to browse the site you are agreeing to our use of cookies.