Mill and the Virtuous Circle of Confidence through Self-Correction 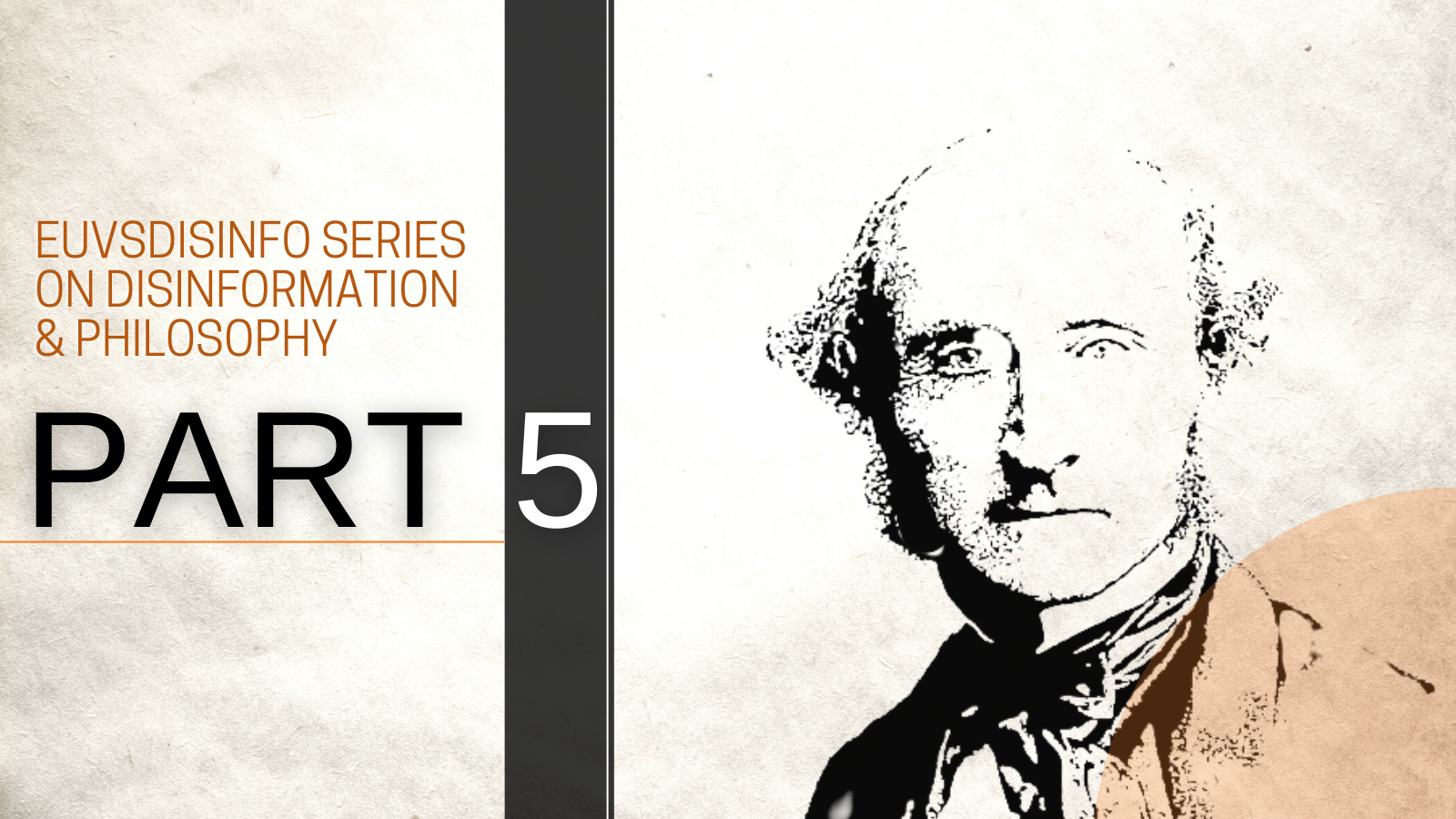 The reasoning of John Stuart Mill is often invoked in debates about disinformation, both by people wary of state intervention, as well as by those who seek to protect the free flow of information. It makes sense to involve Mill, who is one of the great defenders of liberty in the canon of philosophy. The free flow of information is central to his scientific and practical philosophy. Mill explored the consequences of an outright empiricist perspective, but combined it with the Romantic movement of nineteenth century poets, which was fresh and new at the time, as poetry had reignited his life. Mill was raised strictly, perhaps tyrannically even, by his father, who wanted to create a great mind. His book On Liberty, published in 1859, remains the conclusive promotion of the liberal idea that individual freedom is the best path to a happy and just society. Its implications for disinformation are less clear-cut than many would expect.

John Stuart Mill was born in Pentonville, England, in the year 1806 and went on to become one of the fathers of modern-day liberalism. We know a great deal about his youth because he documented it extensively in an autobiography. John was the son of James Mill, who was, together with Jeremy Bentham, an influential proponent of the then upcoming movement of utilitarianism. Roughly, they hold that the morally right action is the one that produces the most good. They equated the good with pleasure, so, like Epicurus, they were hedonistic about value.

Although James Mill propagated pleasure, he gave John an exceptionally strict upbringing. He explicitly aimed to create a genius who could further the cause of utilitarianism. His father did not allow him to play with other children. He was taught Greek from the age of three. By the age of eight, he had read a great deal of the Greek classics and knew history, arithmetic, physics and astronomy. Later Mill suffered from large periods of sadness and even contemplated suicide. As his recovery was inspired by the poetry of the Romantics, Mill realised the philosophy of the Enlightenment only contained “one side of the truth”. From that moment, he aimed to bring together the culture of feelings and of a just society.

Truth does not exist outside criticism

In comparison to Kant, Mill holds that a priori knowledge of objective facts is not possible. The mind has no exalted place in the order of things; instead it is part of nature. Therefore, Mill argues that knowledge can be obtained only by empirical observation, and by the reasoning which takes place on the basis of such observations. For this reason Mill is considered a naturalist, whose ideas on thinking are closer to Hume than to Kant or Plato.

However different from Hume, Mill’s thinking has a certain optimism. Mill characterises the history of science as the compounding of our knowledge by inductive reason, but also the growth of our knowledge of inductive reason. Knowledge compounds, and it does so increasingly efficiently. As man learns more about the universe, induction becomes more and more ingrained in our being. Gradually, man becomes more self-critical and systematic. Nevertheless, because induction always remains based on empirical observation, new evidence potentially always means we need to correct our thinking. Truth is provisional, as we might realise tomorrow we have been wrong all along!

This principal willingness to admit mistakes and correct views underpins the strength of modernity. If a certain position has survived many (intellectual) attacks, it must be solid, because we are not attached to it in principle. Paradoxically, one more likely to be right precisely because he is insecure!

This provisional element links Mill’s theoretical philosophy with his practical philosophy. This openness in fact is the cornerstone of Mill’s political views which are voiced in his On Liberty. Central to the book is the so called “harm principle”. It holds that the actions of individuals should only be limited to prevent harm to other individuals:

“The only purpose for which power can be rightfully exercised over any member of a civilised community, against his will, is to prevent harm to others.”

On Liberty also contains a strong defence of freedom of speech. Mill offers essentially three arguments for freedom and against censorship. Firstly, an epistemological argument. One can never be completely sure a silenced individual might be (partly) right. It is also useful to be confronted with erroneous thinking, as it forces one to re-examining one’s views and prevents them from becoming dogmas. Moreover, people are more likely to drop mistaken opinions when engaged in open conversation. Secondly, a utilitarian argument. According to Mill, it is beneficial for society to have competing ideas. It will eventually lead to the best solutions for society. This is often connected to the idea of the ‘marketplace of ideas’; from competing ideas the truth will emerge. Thirdly, there is a Romantic aspect to Mill’s thinking. Censoring an individual is wrong, as he has a right to self-expression and self-development. 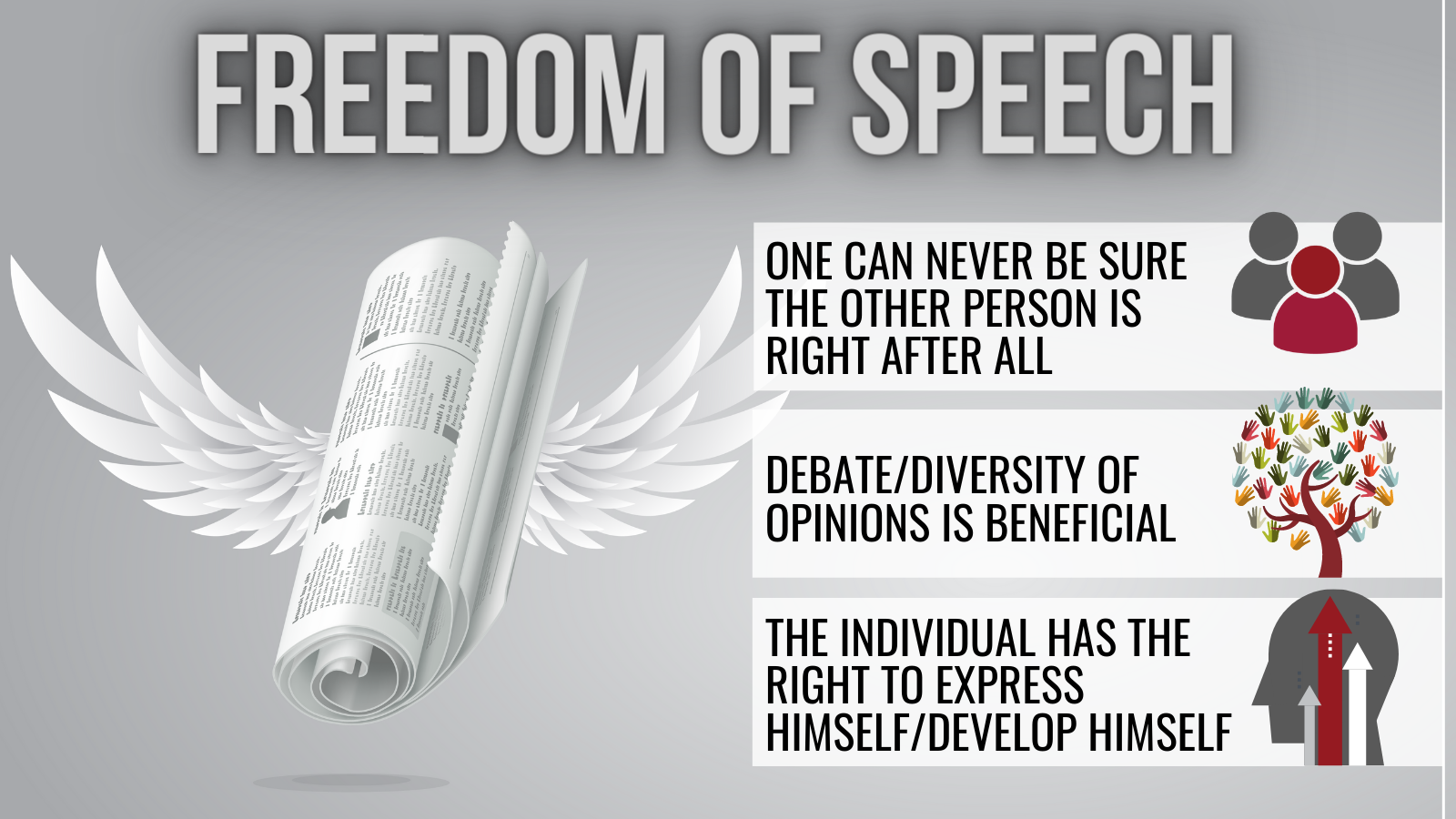 Mill was aware that liberty needs more than just institutions to guarantee freedom. For him, it was not just the state but also society that could harm the free flow of ideas. He rightly foresaw that in mass democratic societies the informal workings of social pressure and expectation could be tyrannical too. For this reason, Mill defended individual liberty from government intervention, but also from the dictates of society, tradition, and custom, which Mill feared would strangle individuality. Actually, for Mill the biggest danger was not government censorship, but social censorship. In other words, a culture of intolerance against people who dare to think differently.

What does it mean for the world of disinformation? Obviously, Mill did not write about this directly. He did however write that some ways of asserting an argument nonetheless “may justly incur severe censure.” He thought of speeches that were “to suppress facts or arguments, to misstate the elements of the case, or misrepresent the opposite opinion.” Deliberate false information might fall under these categories. So Mill was not categorically against censuring those who act in bad faith, although he warned that it is difficult to decide who really does act in bad faith. It is likely Mill would not be categorical against cataloguing foreign interference by false information, executed, financed or supported by a state actor, as EUvsDisinfo is doing.

Another aspect of the threat of disinformation is technology, and who controls it. From a competition perspective, it is not a stretch to imagine that Mill would be worried about the concentration of power with the platforms.

In addition, in the domain of information technology, the application of Mill’s concepts of freedom and harm become slippery. As platforms create environments that aim (and succeed) in holding the attention of users for as long as possible, while mining data users may not fully be aware they’re giving for more effective ad targeting, and in some cases being led to known malicious spreaders of false information, the voluntary nature of users is rather doubtful.

It is a vain attempt to project the thoughts of a great philosopher from the past on today’s problems. Still, for many it is tempting to read On Liberty as a definitive argument against any government-action in the face of disinformation. However, we cannot reduce Mill’s defence of an open process of searching for the truth, his warnings for government and social censorship and his appreciation for the eccentric individual to such a narrow position. His ideas are just too important and interesting to do that.