More than 1,000 prisoners in Belarus are not enough for regime media 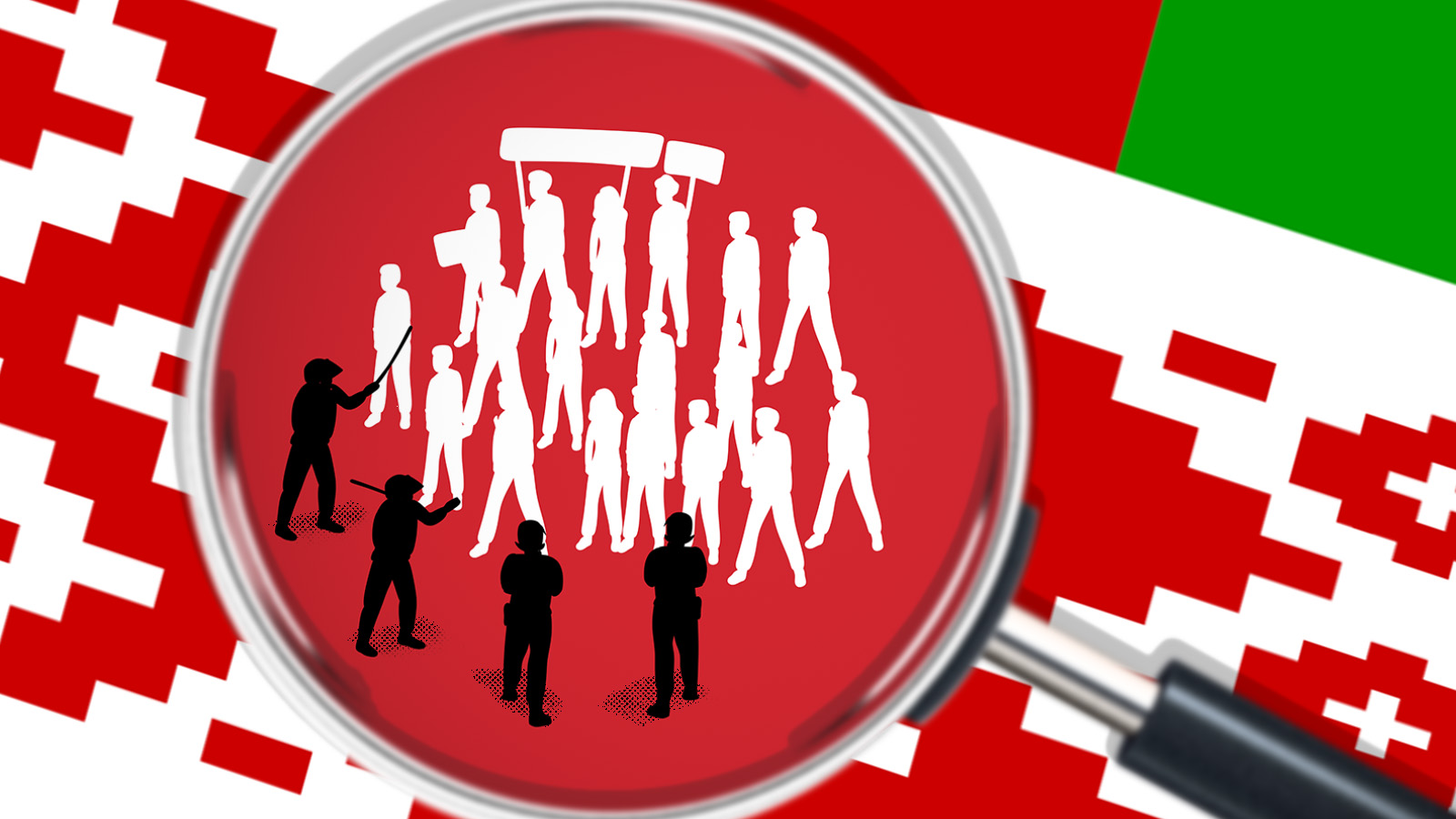 Earlier, we examined how repression in Belarus has taken almost absurd turns. As of 1 February 2022, Belarusian penal facilities held 1,022 political prisoners, as reported by the leading human rights organisation Viasna – “Spring” in Belarusian. It is under heavy repression: Viasna’s website and all its social media accounts, are considered “extremist” by the Belarusian regime, as are those of many other Belarusian civil society organisations. Viasna’s Chairman Ales Bialiatski as well as six others of its employees and volunteers remain in prison.

Viasna’s January 2022 report on the human rights situation in Belarus is as pessimistic as numerous previous reports. Police officers continued unwarranted raids across Belarus to storm houses and apartments in search of protest symbols. The number of political prisoners kept rising steadily. Torture and ill-treatment continued to be used in the investigation of politically motivated criminal cases. Further, inhumane conditions amounting to torture continue to be deliberately created for political prisoners by state authorities.

Viasna’s website, which is impossible to access from Belarus without a VPN to circumvent the electronic barriers, provides many well-documented cases of the active use of criminal and administrative charges to prosecute people for political reasons. It published a detailed account of the 7 February 2022 court session which sentenced a 69-year-old woman, Galina Mikhalchuk, to a prison sentence of two and a half years for negative comments in a local Telegram channel about Alyaksandr Lukashenka, state officials and policemen. According to the prosecutor, the woman was “accused of feeling hatred towards the regime” – and this feeling was punished under three criminal articles.

There are few regularly updated numbers of protest-related criminal cases. Human rights organisations did their best to gather relevant statistics until a serious crackdown in 2021. According to them, by early November 2020, more than 900 criminal cases associated with the protests in Belarus had been started. Recently, independent media turned their attention to the 2021 statistics provided by the Ministry of Interior, which said that around 5,500 protest-related criminal cases had been initiated throughout 2021. According to official information quoted on 15 February from the Belarus Supreme Court, 1,832 persons were convicted in cases related to protests from August 2020 to beginning of February. Hereof 468 for insulting government officials, 396 for group actions violating of public order, 168 for organising mass riots; 126 for hooliganism.

The Lukashenka regime-controlled media and social media accounts support and encourage law enforcement and judicial agencies in rampant repression. They claim the sentences could and should be harsher, humiliate political prisoners, sometimes also target their relatives, use various degrading statements about a broad category of political opponents, and threaten democratic leaders and activists in exile with retaliation.

The presidential administration newspaper Belarus Segodnya (Беларусь сегодня) reacted earlier to remarks about sentences for minor wrongdoings in protest-related criminal cases being too harsh by writing, “Four years for a flower from a flower bed thrown at the special police – yes. And you should be thankful for not getting more. A three-year prison term for kicking a police car a couple of times without damaging it. And if a little scratch had been left [on the car], [the sentence] would need to be at least an additional three years.”

The same media outlet published a humiliating article concerning the two-year prison sentences handed to Belsat journalists, 27-year-old Yekaterina Andreeva and 23-year-old Darya Chultsova, for streaming one of the pro-democracy protests. The newspaper compared the journalists to “artillery spotters” acting for a foreign enemy and called the prison sentences “too humane”. The article even declared the prison terms beneficial for the journalists’ skills: “At least they will learn sewing” – a popular profession in Belarusian prisons. Natallia Hershe, a citizen of Belarus and Switzerland who was sentenced to two and a half years in Belarus for tearing off a policeman’s balaclava, is one of the political prisoners working in the prison’s sewing unit. It was reported that she received a mockingly low monthly payment of BYN 6,66 (roughly EUR 2) for her regular work.

Whereas “regular” political prisoners get their dose of degrading statements in the state-controlled online and social media, democratic leaders in exile happen to receive explicit or implicit death threats. Following Belarusian opposition leader Sviatlana Tsikhanouskaya’s speech in the US Congress in June 2021 when she called for stronger sanctions, one Telegram channel wrote: “Not long ago this was called high treason and a particularly dangerous anti-state activity. Capital punishment was used for such citizens. In case of inability to execute the sentence, an ice axe or poisoned umbrella were used.” This direct link to well-known historic cases of covert extrajudicial killings is another blatant call for violence.

At times, relatives of political prisoners are attacked too, particularly in anonymous pro-regime Telegram channels. Once Darya Losik, the wife of 29-year-old blogger Ihar Losik who was sentenced to 15 years in a strict penal colony, announced that she was quitting her economist position in a state-owned polyclinic after six years, one propaganda-spreading Telegram channel wrote, “How come a maddened female zmagar [note: a degrading term for political opponents], whose husband is an extremist and a foreign agent, has been working in the public sector for so long?”

Earlier, we have demonstrated how Belarus state TV fuels hate and named opposition activists as “Judas”, calling outright for their extermination. The current focus of the regime is to proclaim a high turnout on 27 February for the so-called referendum for a new constitution (securing Lukashenka’s position). Opposition voices suggesting a boycott of the referendum are occasionally equated with Nazi collaborators. Russian state media also chip in and present it as destructive action against the statehood of Belarus.

State propaganda justifies merciless repression and rhetoric with allegations that a Nazi-like Western aggression against Belarus is going on, supported by domestic political opponents. As state-owned STV TV channel said in its programme in February, “A new totalitarian Western Reich is creating a global concentration camp. This camp is supposed to totally control not only people themselves but their thoughts, feelings, and souls […] Troops are moving to the east, they are greeted by collaborators with white-red-white flags”. Independent media are seen as “foreign colonial information troops”, as the head of the Belarus Segodnya media holding Dmitry Zhuk said.

“Let’s make a list of our collaborationists, why are we shy? If you stand against the country and its state order – get to the list. Together with a family and relatives. And publicly – last names can be printed on the opposite side of utility bills, let the neighbours know”, Belarus Segodnya wrote yet again in March 2021.

The Belarusian regime does not appear inclined to soften it approach. On the contrary – new repressive initiatives are regularly voiced. On 8 February 2022 the Belarusian Security Council discussed the revocation of political opponents’ Belarusian citizenship. “Let every traitor think either to continue bringing harm to the country, or to behave decently”, the Security Council’s State Secretary, army general Alexander Volfovich said. Further, at the same meeting Lukashenka discussed the introduction of absentee prosecution of leading political opponents, obviously hinting in particular at Sviatlana Tsikhanouskaya, now in Lithuania.

The number of political prisoners is perhaps the simplest indicator of a dictatorship. Today 1062 persons. Follow the daily count here and relevant EU statements here and here.