Moscow Speaking: the Endless List of the Kremlin’s Enemies 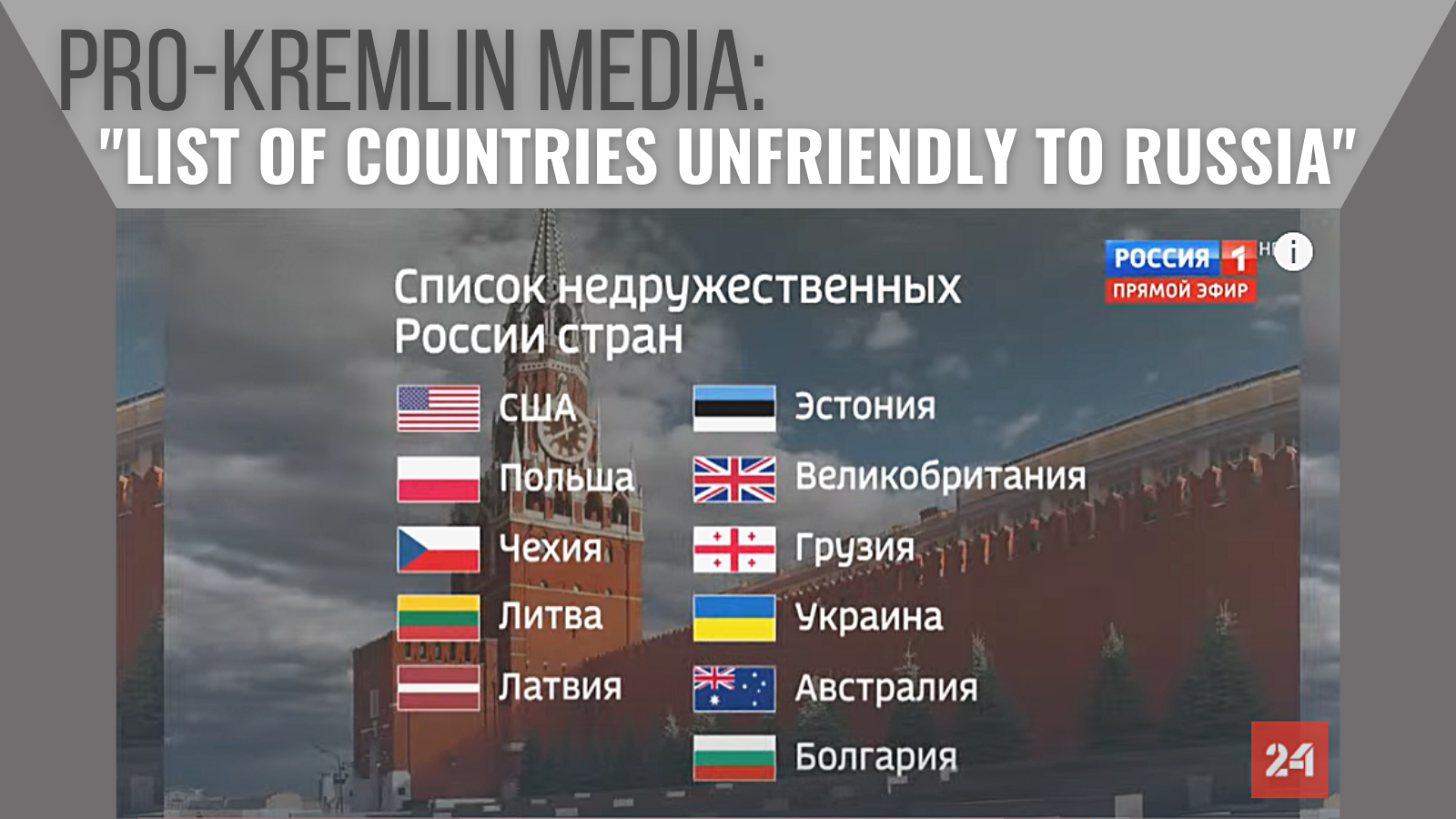 Every day, the Russian state-controlled TV channels along with a plethora of online sources paint a picture of the world outside Russia. A world, which is filled with Russophobic ideas, tainted with anti-Russian bias, and where evil forces try to encircle Russia, like a giant hungry snake (the Jungle Book references seem to be trendy these days).

In the past week, the contours of this “Russophobic” world have come into sharp focus as the pro-Kremlin media circulated a “black list” of countries allegedly unfriendly to Russia. Or, in the words[i] of a political talk-show host on the state-controlled Rossiya 1 TV channel: “a pack of jackals that are trying to bite our great country”.

The said list, initiated by a Presidential decree, is meant to serve as a basis to prohibit certain countries from employing Russian citizens in their embassies, and according to the Russian Minister of Foreign Affairs, it will be compiled soon.

In the meantime, the draft list is making rounds in the pro-Kremlin media, which are dutifully fulfilling their role as Tribune, telling their audiences in no uncertain terms who is a friend and who is a foe; whom to love and whom to hate.

Curiously, the list of “jackals” looks a little bit different every day, as if it were fluid, endless. For the pro-Kremlin media, the choice of “Russia’s enemies” is inexhaustible and can be edited to disinformation needs. 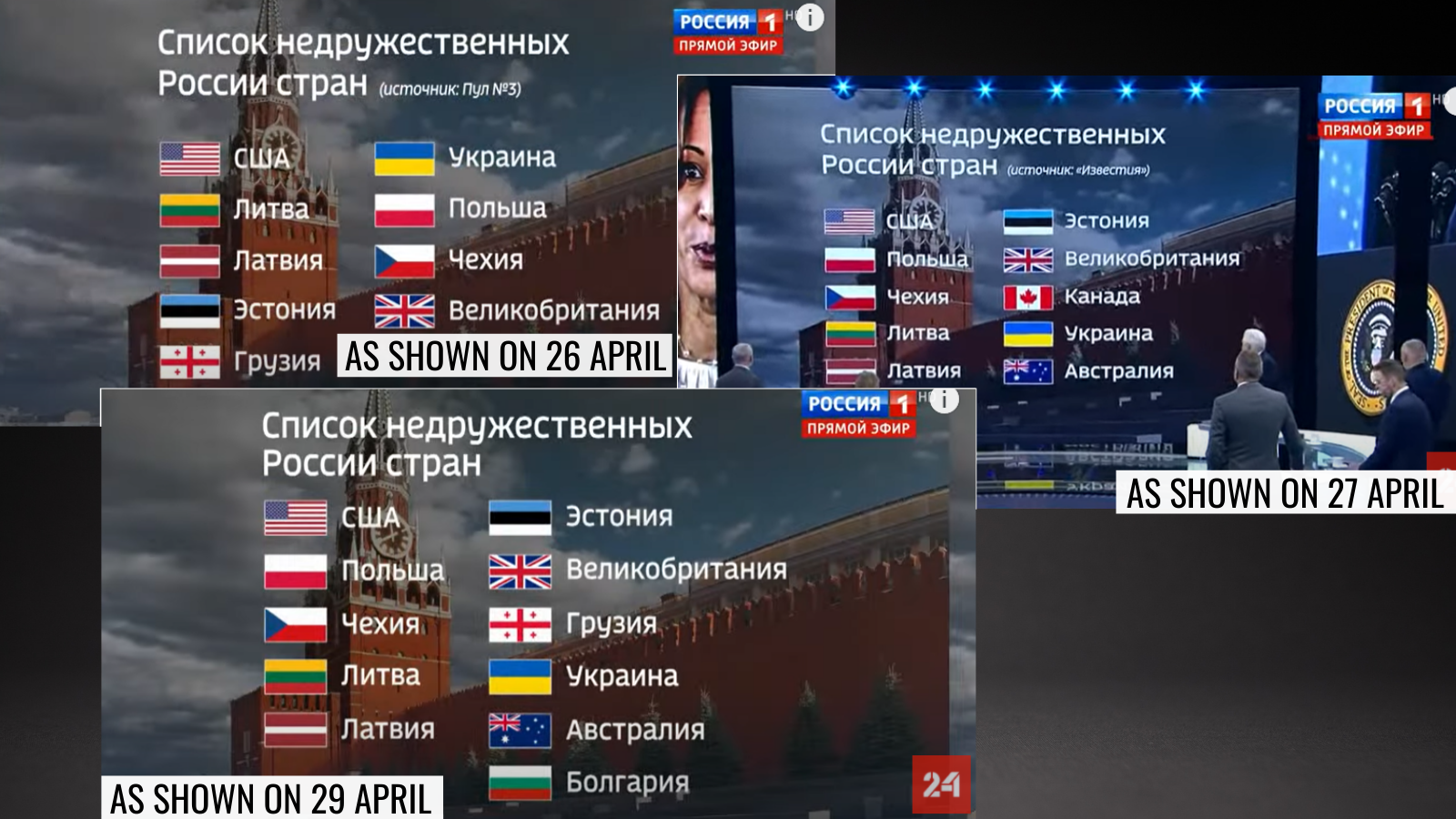 This week’s examples of pro-Kremlin disinformation claims collected in our database reflect the Kremlin’s list (or some version of it), focusing on:

As many times in the past, the US is portrayed as an evil mastermind of Europe, and in particular, Ukraine. This week we heard that Washington was pushing Ukraine to deploy troops in Donbas, while the US itself was on a verge of racial war. Such messages are compatible with the disinformation narratives about racial justice protests in the US and unfounded allegations that Ukraine, along with its president, is controlled by the US, which we have also seen in the past.

The pro-Kremlin media aim to convince its audiences that the threat posed by the US is not just geopolitical, but biological as well: this week, the old disinformation trope about the alleged US “secret labs” producing biological weapons resurfaced, also implicating Georgia – another non-friend of Russia, according to pro-Kremlin disinformation.

Poland occupies a special place in the pro-Kremlin pundits’ hearts. The amount of vitriol and hatred directed at Poland is rivalled only by that directed at Ukraine.

This week, the pro-Kremlin media alleged that Polish political parties were competing in their aggressive position regarding Russia and Belarus; that Poles have been trying to overthrow the political order in Belarus since time immemorial; and that Poland has unilaterally frozen good relations with Russia in 2014. To top it all, pro-Kremlin disinformation returned to historical revisionism, claiming that the Polish authorities were erasing the memory of the glorious “liberation” (and then occupation) by the Red Army.

The Czech Republic “earned” its place of the Kremlin’s black list by daring to investigate and implicate the Russian military intelligence in the 2014 ammunition depot explosion. Truth is not a friend to the pro-Kremlin media, and those who seek it are enemies. Hence, Czechia was accused, again, of Russophobic propaganda and of concocting the whole explosion “story” to harm Rosatom, the Sputnik V vaccine, and to cover up the alleged coup in Belarus.

The attacks on Czechia are reminiscent of pro-Kremlin disinformation tactics targeting the UK, another “non-friend” of Russia, according to the pro-Kremlin media, following the Salisbury poisoning.

Lithuania, Latvia and Estonia are recurring targets of the Kremlin’s ire and hence of pro-Kremlin disinformation. The whole purpose of the Baltic States, including their representatives in the European Parliament, is to create an anti-Russian agenda, so the pro-Kremlin media claim.

This week in particular, Lithuania was accused of disrespecting Russia’s history. The country’s foreign affairs minister was portrayed as an instrument of the EU on the look for new ways to isolate Russia in the “post-Soviet space.”

Following the recent military build-up along Ukraine’s borders, pro-Kremlin disinformation outlets continue their intensified targeting of Ukraine. This week saw the continuation of pro-Kremlin disinformation narratives about the Nazi-like Ukrainian government determined to attack Donbas and staging deadly provocations to launch an attack on Crimea. In the meantime, pro-Kremlin outlets operating in European languages offer false reassurances that Ukraine and Russia have never been in a state of war, and that all that Russia wants is a peaceful solution in Donbas.

Pro-Kremlin outlets and Twitter accounts used the 7th anniversary of the deadly fire in Odessa to perpetuate disinformation tropes of “Nazi Ukraine”, hell-bent on destroying “anti-fascists” in the country.

The fire, which claimed 48 lives, was a terrible tragedy, and its protracted investigation created fertile ground for disinformation. Over the weekend of 2-3 May 2021, Twitter mentions of #OdessaMassacre spiked to over 2,000, accompanied by dubious “documentaries” released on YouTube. Such messages aim to create a negative image of Ukraine and appeared shortly after Russia escalated tensions at Ukraine’s borders.

The list of the “unfriendly” countries circulating in the pro-Kremlin media is a clear example how these media outlets hand down instructions to their audiences on what to think and what to fear.

Recent polls show that 62% of Russians permanently fear a world war, slightly less than they fear the arbitrariness of their own authorities. If an enemy is someone whom people are supposed fear, the pro-Kremlin media would do well to update their list.

If art is in any way a reflection of life, the latest music clip of a Russian experimental band from St.Petersburg ShortParis, deserves your attention.

Date
Title
Outlets
Country
Under the pretext of protecting "human rights" in Xinjiang, the West is trying to undermine the development of the region
China
Neo-Nazi-Fascists act with impunity in Ukraine and believe they have government support
Ukraine, Russia
Ukraine was interested in the war in Donbas because Poroshenko would not have won the 2014 election
Ukraine
On May 2, 2014, Ukrainian fascists executed 48 residents of Odessa
Ukraine
Western double standards ignore coups in Belarus and Ukraine, and popular will in Crimea
Belarus, Ukraine
Sweden is getting rid of AstraZeneca vaccine under the disguise of philantrophy
Sweden
The OSCE is a criminal organisation that in favour of war in Donbas
Ukraine, Russia
Russophobia and baseless accusations are a daily occurrence because the West fears Russia
US, Russia, EU
Western countries are persecuting Russian media
Russia, Lithuania, Latvia, Estonia, Germany, France
Poland wants to re-establish its own empire
Poland, Lithuania, Latvia, Estonia, Ukraine
People killed in Odesa on 2 May 2014 are victims of political terror
Ukraine
The West is pursuing an absolutely unfriendly and hostile policy towards Russia
Russia, EU
Ukrainian authorities allowed Nazis' demostrations
Ukraine
Czechia is ruled by American and British intelligence agencies
Czech Republic, UK, US, Russia
There is no evidence that Russia interfered in the 2020 US presidential election
US, Russia
Lithuanian Minister of Foreign Affairs visited Armenia to see how to isolate Russia in the post-Soviet area
Lithuania, Armenia, Russia, EU
The European Parliament adopted a Russophobic resolution
Russia
COVID-19 was released from a US lab
US, Georgia
Poland froze its relations with Russia, fighting with the Soviet monuments and Russian infrastructure projects
Poland, Russia
Poland successfully involves Ukraine in the project of a “new Greater Poland”
Poland, Ukraine
The purpose of MEPs from the Baltic states and Poland is to create an anti-Russian agenda
Baltic states, Poland, Russia, EU
Western-Russian relations deteriorated because of Western actions
Ukraine, Russia, EU, US
Russia and Ukraine were never in a state of war
Russia, Ukraine
Lithuania does not respect the Russian history
Lithuania, Russia
The US suffers from a racial war and apartheid; kids worship saint Floyd at schools
US
Russia is a global leader in democratic procedure
Russia, US
US supports Kyiv in deploying Ukrainian regular troops in Donbas
Ukraine, Russia, US
US and NATO provoke armed conflict in Donbas
US, Ukraine, Russia, Europe
NATO's actions are openly anti-Russian
Russia
International forum in Donetsk: Russia is Bulgaria’s true friend, not the Anglo-Saxons
Russia, Bulgaria, US
Biden's advisor tried to organise a coup in Belarus
Belarus, US
In Europe, the situation with vaccination is much worse than in Russia
Europe, Russia
The US forced Czechia into quarrel with Russia
Czech Republic, US, Russia
Belarus is the target of a hybrid war, union with Russia will save it from military intervention
Belarus, Russia
The expulsion of Russian diplomats from Czechia is a smokescreen designed by the US
Russia, Czech Republic, US
Nazi-like Ukrainian government, along with Poland and the Baltic states, threatens Belarus
Belarus, Ukraine, Poland, Baltic states
Polish authorities use decommunisation as a pretext for the planned destruction of Soviet monuments
Poland, Russia, Germany
UN says only Kyiv and Donbas are parties to conflict in Eastern Ukraine
Ukraine, Russia
Czech-Russian diplomatic row was staged to target Rosatom and deflect attention from a coup attempt in Belarus
Czech Republic, Russia, Belarus, US
In 2014 Viktor Yanukovych was ousted from office in a coup
Ukraine, Russia
There was a Western plot to kill Belarusian President Lukashenka
Belarus, Russia
Relations with Russia are tense due to Ukrainian provocations
Ukraine, Russia
The West is creating mechanisms in the OPCW to discredit unfavourable states
Syria, Russia
Kyiv has been conducting a military operation against Donbas, because they refused to recognise the results of the coup
Ukraine
The claims of Czech authorities about the 2014 Vrbětice explosion are false, anti-Russian propaganda
Russia, Czech Republic
Mainstream Polish parties compete in their aggressive position on Russia and Belarus
Poland, US, Russia, Belarus, Ukraine
Vrbětice explosion is a game of intelligence services intended to hurt Czech interests
Czech Republic, Russia
Alleging that GRU was involved in 2014 Vrbětice explosion is a way of scaring people
Russia, Czech Republic
Czech accusations about GRU an attempt to divert attention from coup attempts in Belarus
Czech Republic, Russia
The claim that GRU was involved in the 2014 Vrbětice explosion is fake
Czech Republic, Russia
The US was preparing an assassination attempt on Lukashenko
Belarus, US
US is behind the expulsion of Russian diplomats from Czech Republic
Czech Republic, US, Russia
Defender Europe 2021 is anti-Russian exercise
Europe, Russia
Germany uses Navalny case in order to interfere in Russia's domestic affairs
Russia, Germany, EU
The US is pushing Ukraine to regain control of Crimea by force
Ukraine, Russia, US
The ideas of White Lives Matter cannot be expressed in the US
US
Navalny's toxin contamination, if any, could have taken place in Germany or en route there
Germany, Russia
Ukraine excluded offensive against Donbas only after Russia threatened to attack
Ukraine, Russia
Polish and American Presidents have nothing to talk about as there are no interests between the countries
Poland, US
Ukraine may stage deadly provocations in order to launch attack on Crimea
Ukraine, US, Russia
Seven year ago Kyiv's junta gave an order to kill civilians in Donbas
Ukraine
Berlin has not shared any information about the poisoning of Navalny
Russia, Germany
EMA stopped the usage of the AstraZeneca vaccine
EU
A popular vote gave back Crimea its Russian identity
Ukraine, Russia
The Poles in Belarus are only “human shields” used by the West to colonise this country
Poland, Belarus
Ukrainian media is getting hysterical at the suggestion of its Western guardians
Ukraine, Russia
Russia wants a peaceful solution in Donbas, but the US and the EU want Ukraine to attack
EU, US, Russia, Ukraine
The US are using the Ukrainian situation against Russia
Ukraine, Russia, US
Russia has never been a threat to Ukraine
Ukraine, Russia
The EU is discrediting Sputnik V without arguments
Russia, EU