NATO Special: Global Dictatorship and Unleashing All the Wars of the Last 25 Years 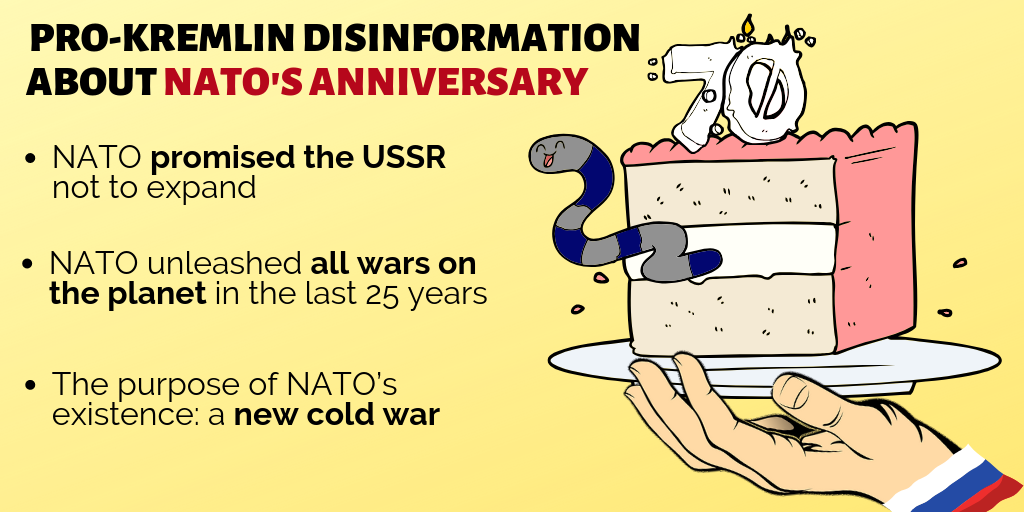 What first draws the reader’s attention is the coordination. In Russian the guidelines about which themes to cover, who is to be treated positively, who should have negative coverage and who should be altogether ignored is called the temnik. This system has replaced the old style reactive approach of censorship with a proactive approach. As a result the same narrative about NATO promising to Russia that it would stay out of Eastern Europe was published in German, Italian, French and Spanish Sputnik. The headlines were also telling: “Moscow – old, familiar enemy: NATO in crisis of faith”, “70 years of propaganda, crimes and hypocrisies – Happy Birthday, ‘dear’ NATO!”, “The National Interest: How the NATO countries deceived Gorbachev” and “NATO – 70 years of the senseless struggle to exterminate Russia”.

But don’t be deceived. The underlying point of these articles isn’t solely criticism on NATO. It’s also about the sphere of influence. It’s about challenging the right of millions of people in Eastern Europe to choose their path as a nation and also about those countries’ right to join the international organizations that they want to join. And cultivation of the old narrative that “Western leaders promised the USSR that NATO won’t expand” is actually about denying those rights to entire countries. What’s even more interesting is the fact that no such promise was ever given. Gorbachev himself rejected such claims in October 2014, by saying “the topic of ‘NATO expansion’ was not discussed at all, and it wasn’t brought up in those years”.

The true crème de la crème has to be the pro-Kremlin narrative about NATO unleashing all wars on the planet in the last 25 years. The author of this claim obviously has not heard about certain conflicts in Georgia and Ukraine and the undeniable role Russia has played in those and continues to do so even today. But the good gets even better, as the end of the pro-Kremlin message claims that NATO is a tool for the US to establish dictatorship on the planet.

The undermining of Georgia continues in the following cases: “Georgia’s Anaklia seaport project is a NATO and US effort to regain a foothold in the Black Sea region” and “Georgia will become a military protectorate of the United States“. Here too the common denominator seems to be to downplay the right and the ability of countries to stand as sovereign entities when they are next to Russia.

The good old narrative of Gayropa got a new plot twist last week, as pro-Kremlin media suggested that Schengen visa fees for Belarusians are high because the number of homosexuals per capita in Belarus is very low. But that’s not all, according to the article, a woman is not welcome in the EU if she has no balls. Makes sense, right? If not, well, here’s an explanation: this narrative links the EU’s moral decay to the Belarusian democratic opposition and at the same time portrays the EU as harassing Belarus.

In reality Belarus has not concluded a visa facilitation agreement with the EU and thus the higher fees. The actual visa agreement does not contain conditions about homosexuals and in 2017, Belarusians were granted 710,000 Schengen visas – the biggest amount in the world. 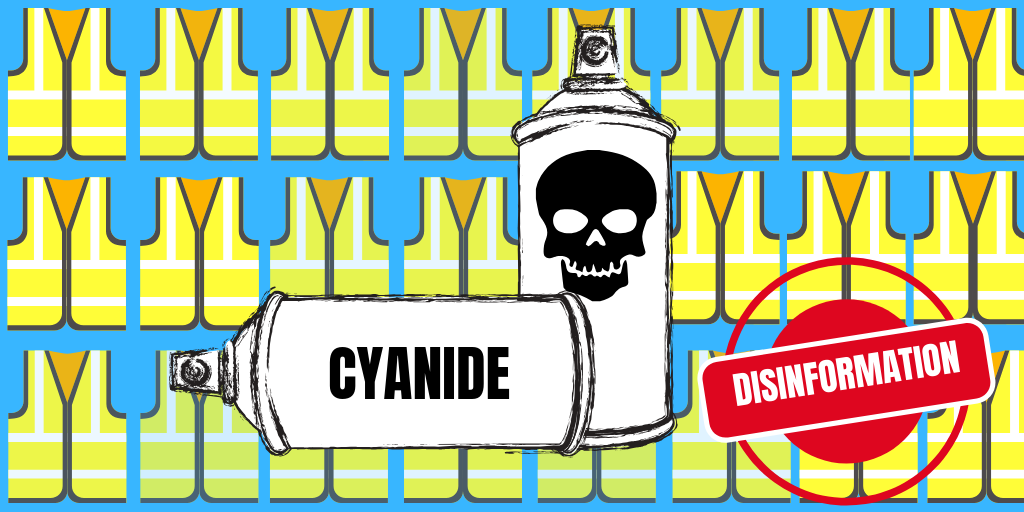 Although tear gas can be rather uncomfortable, it’s not so far known to be on a par with Nina Ricci perfume rebottled in Russia in terms of its fatal consequences. Perhaps in an attempt to resuscitate the “they do it too” line of disinformation, the pro-Kremlin media suggested that cyanide might have been found in tear gas used against Yellow Vests protesters. What we do know for sure is the fact that no trace of cyanide poisoning was found and pro-Kremlin outlets have been using the narrative of violent repression of protests before.

Date
Title
Outlets
Country
Under the leadership of Petro Poroshenko, Kyiv has not advanced in the way of Europe
Ukraine
The Polish Church refused to recognise the autocephaly of the Orthodox Church in Ukraine
Poland, Ukraine
Schengen visa fees for Belarusians are high, because the number of homosexuals per capita in Belarus is very low
Belarus
Zelensky's presidential bid is an attempt by Macron to brainwash Ukraine
Ukraine
Western project on Kurapaty memorial site plans to ruin Belarusian statehood
Belarus
Tear gas used by the police against Yellow Vests may now contain Cyanide
France
NATO has unleashed all wars on the planet in the last 25 years
Bosnia and Herzegovina, US
Poland, Hungary increasingly disenchanted with EU rule
Hungary, Poland
Poroshenko and Zelensky are puppets of Western imperialism
Ukraine
Far-right US stooge Guaido has low support in Venezuela
Venezuela, US
Petro Poroshenko intentionally created the Kerch Strait incident in order to cancel or postpone the elections
Ukraine, Russia
With the illegitimate war against Yugoslavia, NATO made the world a theatre of war
Yugoslavia
Canada is participating in provocations in the Black Sea
Canada, Germany
A limited military conflict may erupt while a Canadian ship is standing in the Odessa port
Canada, Ukraine
Merkel interfered in Ukrainian election
Ukraine
After the election Ukraine will fall apart
Ukraine
In the nearest future we may expect a provocation in Crimea from NATO
Ukraine
NATO is the global fuse to ignite war
NATO cultivates Cold War block thinking and considers Russia as an enemy
US, Russia
NATO promised Russia it would not expand after the Cold War
Russia
Russians are the new Jews, the persecuted nation
Greece, US
NATO has been trying to exterminate Russia for 70 years
USSR, Russia
Polish farmers want anti-Russian sanctions to be lifted
Poland, Russia
Ukrainian army is guilty for provocations and shelling on election day
Ukraine
The West does not want the war in Ukraine to end
Germany, Ukraine
Despite promises made to Gorbachev, NATO expanded to include former USSR and Warsaw Pact countries
Russia
In 1999 NATO bombing Yugoslavia killed around 2,500 people
Yugoslavia, Serbia
The purpose of NATO's existence: a new cold war
US, Russia
US Ambassador to Kyiv controls Ukraine
US, Ukraine
NATO is a foreign policy instrument of the USA
US
NATO's Stoltenberg: Unless NATO keeps expanding, it will lose its relevance
Georgia
Georgia will become a military protectorate of the United States
Georgia
NATO invaded the Balkans
North Macedonia, Bosnia and Herzegovina, Albania, Croatia, Greece, Yugoslavia, Slovenia
The U.S sponsored the campaign of Petro Poroshenko
US, Ukraine
No breakthroughs in Donbas or Crimea if Zelensky wins because it is Washington that decides
US, Ukraine, Russia
NATO admits the disqualification of millions of voters had a big impact in Ukrainian elections
Ukraine
Ukraine's presidential campaign is unique for the scale of electoral fraud
Ukraine
Post-Soviet countries are feudal principalities governed by the West
Uzbekistan, Azerbaijan, Kazakhstan, Armenia, Tajikistan, Moldova, Georgia, Belarus, Ukraine, Russia
True Belarusian statehood and genuine independence only possible in the Union State with Russia
Belarus, Russia
Integration with the EU would bring a complete loss of independence to Belarus
Belarus
Ukraine is under the external control of the US and EU
US, Ukraine
Russia does not occupy Ukrainian territory
Ukraine, Russia
In 15 years, NATO has pumped 5 billion euros from Latvia
US, Latvia
US meddles in the Ukrainian elections
US, Ukraine
EU won't invest in Ukraine
Ukraine
Stoltenberg demands that Georgia pays 2% of its GDP to NATO
Georgia
NATO controls the military infrastructure of Ukraine, Georgia and Moldova
Moldova, Poland, Georgia, Ukraine, Russia
OSCE wants internet in Belarus be full of terrorists and anarchists
Belarus
Ukraine was involved in the Malaysian Boeing MH17 catastrophe
Malaysia, Australia, The Netherlands, Ukraine, Russia
Georgia's Anaklia seaport project is a NATO/US effort to regain a foothold in the Black Sea region
Georgia, US
West aims to destroy historic conscience of Belarusian society
Belarus, Russia
OSCE will not consider citizens of Belarus European, unless Minsk consults pro-EU NGOs about reforms in media sector
Belarus
There is no proof that Russia violated INF
US, Russia
Western cybersecurity company is US media's sole source of information on Russian hybrid warfare
US, Russia
All US aid to Georgia is solely military, ignoring country's economic and social needs
Georgia, US
If Belarus does not deepen integration with Russia it will turn into anti-Russia
Belarus, Ukraine