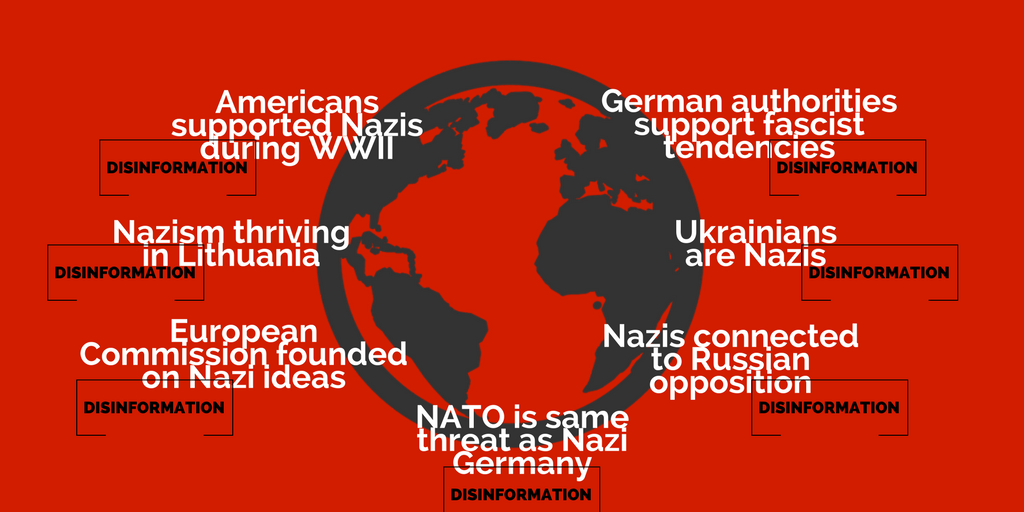 Regular readers of the Disinformation Review already know that the accusation of Nazism is one of the favourite techniques of pro-Kremlin outlets. The current Russian leadership describes the USSR as the only winner over Nazi Germany, and it is even illegal to recall that Adolf Hitler and Joseph Stalin were allies at the beginning of World War II.

The most “targeted” country in this respect is definitely Ukraine. Again and again, pro-Kremlin media accuse Ukrainians and their government of being Nazis, as we can see in the latest Disinformation Review. But in last 16 months, the East StratCom Task Force has collected many more examples of pro-Kremlin media labelling countries, citizens and politicians as Nazis:

– German authorities were accused of supporting fascists tendencies – despite the fact that German polls show that the number of people sympathizing with neo-Nazism is decreasing. In January 2017, Dmitry Kiselev’s popular news show claimed that German chancellor Angela Merkel sought “Lebensraum” in Eastern Europe like the Nazi regime.
– A Latvian school was allegedly awarding graduates with rings featuring a Nazi Swastika when in fact every graduate was free to choose his own ring.
– Americans were accused of supporting Nazis during World War II, allegedly using them to fulfil their dream of defeating Russia. This article on Russia Insider, published ten months before the US elections of November 2016, presented a video of Hillary Clinton with “satanic glee” as evidence (similar messages were relayed by the notorious disinformation-oriented outlet Infowars.
– The European Commission was claimed to be founded on Nazi ideas (see here or here). This “revelation” was based on the claim that Walter Hallstein, the first president of the Commission of the European Economic Community, was a prominent Nazi and a member of NSDAP. Well, he wasn’t – his biography states that his “attitude to National Socialism was hostile, and he even cultivated contacts with declared opponents of the system”.
– Nazism was supposedly “thriving” in Lithuania, which is claimed to constantly violate the rights of Russian speakers. This is not true, already because Lithuania, before joining the EU, was subject to intensive scrutiny by the EU to ensure the rights of the Russian minority.
– The entire EU has been branded a “Nazi brainchild” that was supposedly planned by Adolf Hitler himself.
– The whole West: As major Russian TV show Vremya Pokazhet explained, the attitude of Russophobia allegedly prevalent in the West is intended to destroy Russians in the very same way that Nazis aimed to destroy Jews (watch it here at minute 9:49). In Vladimir Solovyov’s TV show, we heard that “US-led Europe” has been carrying out the Nazi policy of “geopolitical racism” towards Russia, convincing Russians that they are the “wrong nation” where uncivilized methods are allowed.
– And also Europe in its entirety, especially the Baltic countries have been termed Nazis, supposedly because of Angela Merkel who demonstrates her “commitment to Aryan ideas by approving of Nazism in the Baltic countries”. The Baltic states are also said to use neo-Nazi methods against Russia in order to impose European values there, which is a direct threat to President Putin’s power.
– NATO is not spared from the accusation of Nazism, given that it allegedly poses the same threat to Russia as Nazi Germany did to the USSR in 1941. Again, in the major TV show Vremya Pokazhet, formerly run by Pyotr Tolstoy, who is now deputy speaker of the Russian Duma. The supposed evidence for NATO’s Nazism is that the design of the Alliance’s new headquarters resembles and was therefore allegedly inspired by the symbol for the Nazi paramilitary organisation SS.
– Finally, pro-Kremlin media have also identified some Nazis in Russia. But they are exclusively connected to Russian opposition activists and are preparing a revolution against the current authorities. This revolution was supposed to begin the very next day after last year’s parliamentary elections. The elections took place in September 2016; no revolution yet.

From this brief overview, it appears there are only two possibilities in the unique universe of pro-Kremlin media. Either you live in Russia and support the current Russian regime; or if you do not meet these two requirements, you might find yourself called a Nazi.