Skip to main content
Read this article in Русский
News and analysis
November 06, 2020

”Neither Free, Nor Fair” – Russian State Media Cries Foul on US Elections 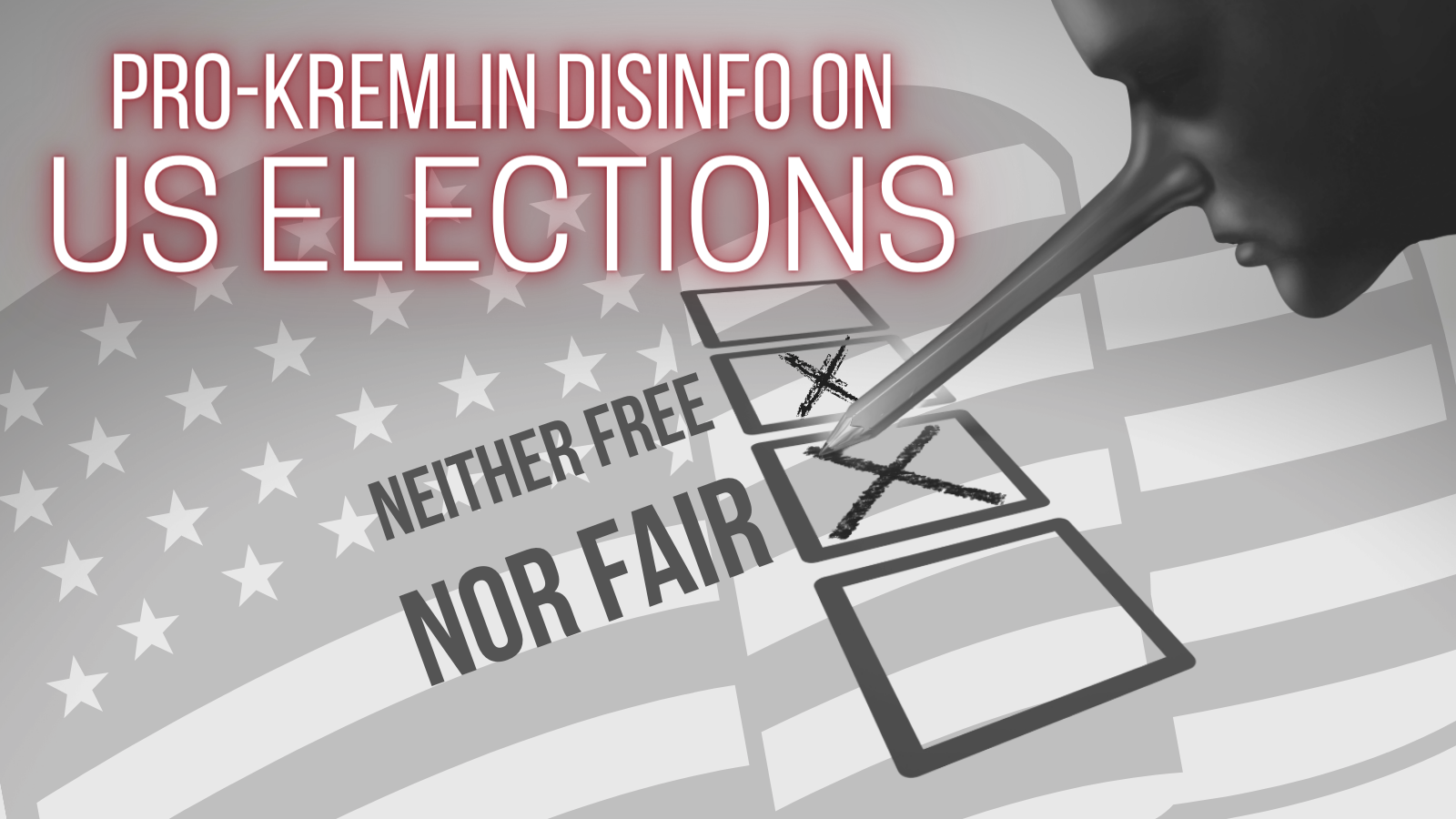 Russian state media’s first comments on the outcome of the US Presidential election express deep disappointment. The head of the state broadcaster RT, Margarita Simonyan, questioned whether Russia at all should recognise the legitimacy of the election:

Neither free, nor fair

Russian state media have, as EUvsDisinfo reported, shown a strong pro-Trump bias, and the Kremlin’s interference in the US elections 2016 is well documented. Several suspects were indicted in a series of trials. The Mueller report details the interference and states, without a hint of doubt, that Russian state actors performed illegal interference on the US electoral system.

In 2016, the Russian parliament greeted the election of Donald Trump with standing ovations, and while Mr. Trump remains “a favourite” for the Kremlin, it is obvious that the enchantment with the incumbent US president has dwindled. An English-language site with connections to the Russian foreign intelligence services, describes Trump like this in an article from the summer of 2020:

President Putin has already said in the recent past that negotiating with Team Trump is like playing chess with a pigeon: the demented bird walks all over the chessboard, shits indiscriminately, knocks over pieces, declares victory, then runs away.

The quote is colourful, but fake. President Putin has never said anything similar. The quote feeds into a narrative, frequently employed by the Kremlin, about the shortcomings of the democratic system itself. A former aide to Vladimir Putin, leading Kremlin ideologist Vladislav Surkov, has described democracy ia merely a battle of bastards:

There is a plethora of bastards to choose from and complicated rules to keep the infighting between them at more or less a draw. This is how the coveted system of checks and balances works – a dynamic equilibrium of pettiness, a balance of greed, a harmony of deception. If someone goes too far, the ever-vigilant Deep State moves into action and the invisible hand draws the culprit back to the bottom.

So, whoever we vote for, the Deep State prevails. Why bother voting? And the general impression from reading the pro-Kremlin English language media is that the US is collapsing: A coup d’etat is taking place, George Soros in instigating a civil war; we’re witnessing the Balkanisation of the United States; new countries will appear, better answering to the real conditions in North America.

RT has fed into this narrative, suggesting that the US political system is collapsing:

Whatever happens in November, America’s future is bleak.

Because they are both embedded in America’s toxic political culture, neither Trump nor Biden (or Harris) have the capacity to deal with the looming political and social crises.

The key institutions in a democracy are losing their legitimacy as people do not trust the media, politicians, and now doubt the ability to hold fair elections as each side accuses the other of planning to rig the election or not accept the outcome. The national consensus is fragmenting, which expresses itself in the failure of democratic mechanisms and rise in political radicalism.

One can certainly see challenges in the political system of the United States, but RT describes a conspiracy; where entirely other forces than the voters decide the country’s future:

The mainstream media, Hollywood, the academic intelligentsia, the radical Democratic party are all party to this and use lies, damned lies, fake polls and slanted news – in a word, propaganda – to seek to achieve their ends.

It is a known fact that Washington’s pay-to-play swamp monsters, the Wall Street establishment, the censoring oligarchs of Silicon Valley, and the fake news media all loath President Trump and want him out of office at any cost.

Russia-based One World argues that the outcome of the election is the result of a carefully planned scheme by the “Deep State”: “An overt attempt to anti-democratically topple the incumbent President of the United States through superficially ‘democratic’ means” and “a meticulously preplanned operation to pull off a superficially ‘democratic’ coup through mail-in ballot fraud”.

The election observers from OSCE have concluded that the elections were “competitive and well managed”, despite certain legal uncertainties and logistical challenges. The RT editor-in-chief comments the OSCE conclusion curtly, writing English with Cyrillic letters:

You gotta be kidding me

All this brings us back to the Kremlin ideologist, Vladislav Surkov, who kindly offers the world the Russian political system:

Our system, just as everything Russian, does of course not look very elegant, but it is honest. Not everyone considers the word “honest” as a synonym with the word “better”, but it is nevertheless attractive. /—/ The ability to hear and understand the people, see it right to its depths and act accordingly – this is the unique and most important characteristic of the State of Putin. This corresponds with the people and is in line with its ambitions and is not subject to any of history’s counter currents. This is efficient and lasting.

Simonyan, Surkov and the pro-Kremlin media are champions of freedom: Freedom from democracy.