New Wave of Disinformation on Sanctions 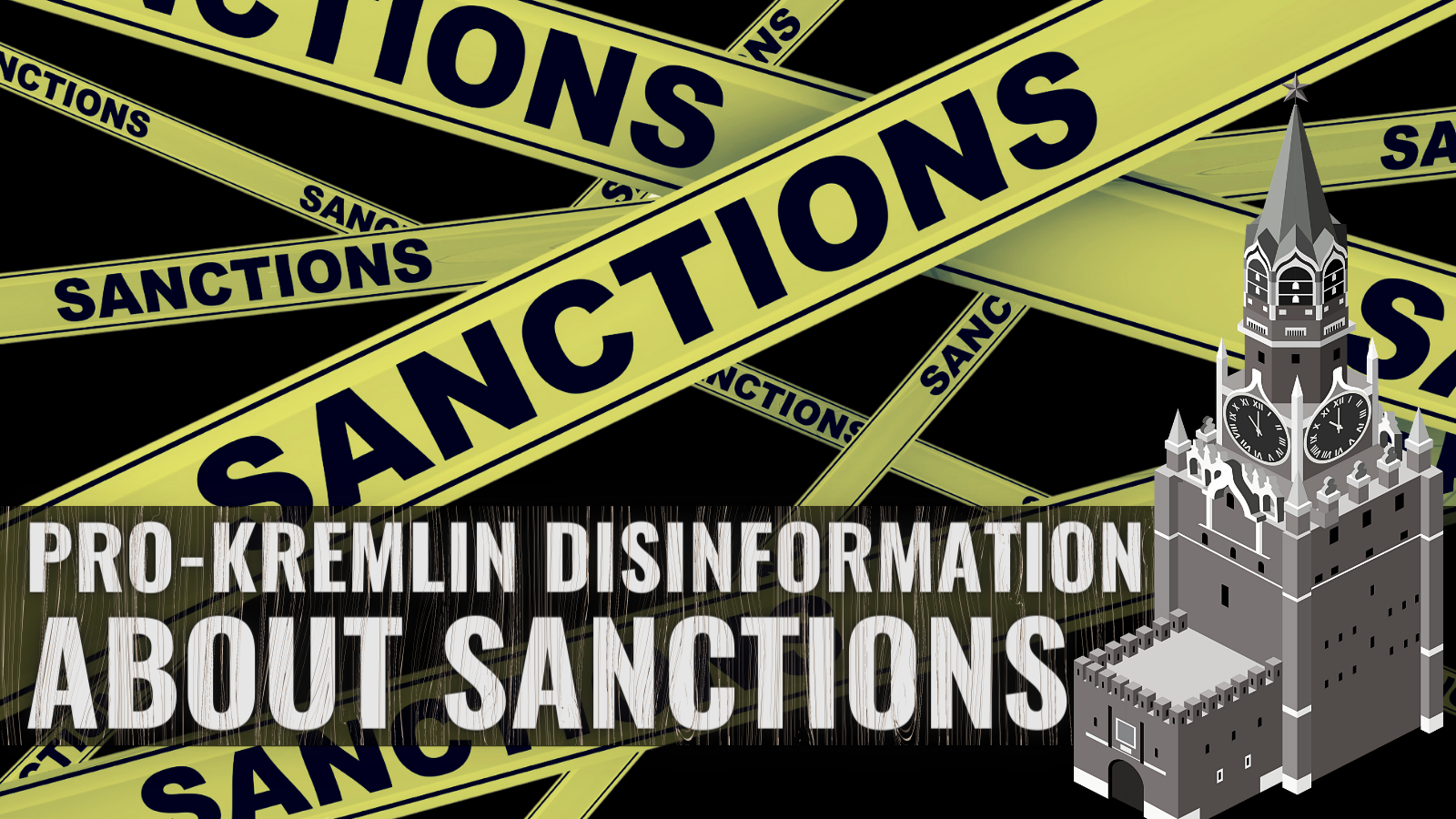 They were held responsible for serious human rights violations, including arbitrary arrests and detentions (including that of Alexei Navalny), and widespread and systematic repression of freedom of peaceful assembly and of association, and freedom of opinion and expression in Russia. The decision under the new instrument designed to protect human rights across the world prompted media interest, but also a wave of disinformation.

The disinformation related to EU’s sanctions is not a new phenomenon. There are 420 cases on sanctions in our database. We spotted 35 alone in 2021. The very first narrative on sanctions we covered, back in ’15, claimed that the USA persuaded the EU to impose sanctions, combining the sanctions theme with the theme of European countries on an American leash.

The narratives of the pro-Kremlin media in the EU, the United Kingdom, as well as in Russian domestic media are similar. Recent examples include: 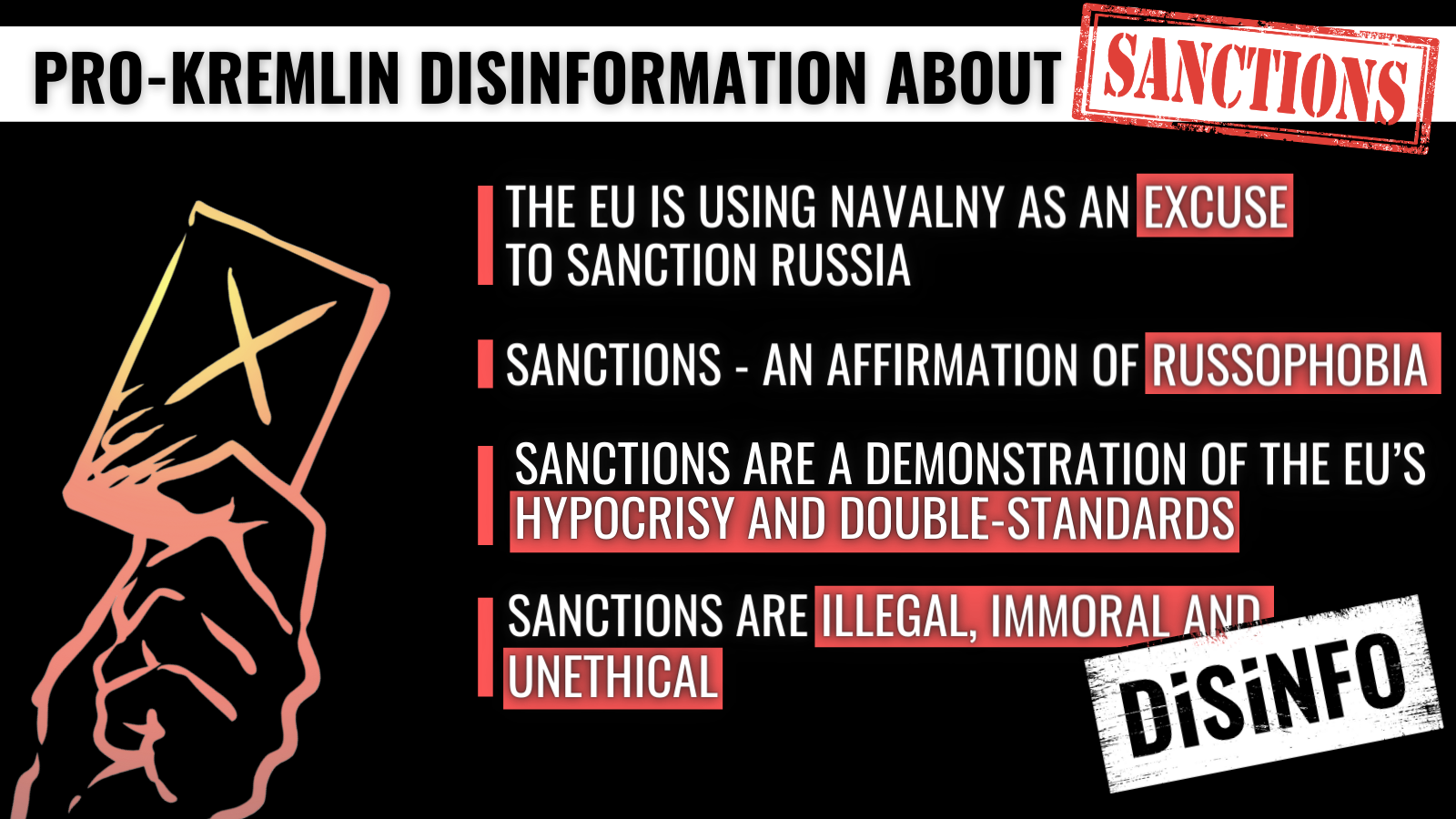 In a recent case of our database, sanctions are described as an illegal, hypocritical and childish reaction of the EU. However, sanctions are intended to bring about a change in policy or activity, as well as entities and individuals, responsible for the malign behaviour at stake. Generally, sanctions imposed by the EU may target governments of third countries, or non-state entities (e.g. companies) and individuals (such as terrorist groups and terrorists). Most sanctions target individuals and entities and consist of asset freezes and travel bans.

The EU sanctions that responded to the illegal annexation of Crimea however, consists of the so-called sectoral measures; economic and financial measures such as import and export restrictions, restrictions on banking services. The EU adopted sanctions against Russia as reaction to the annexation of Crimea in 2014 and the deliberate destabilisation of Ukraine. The sanctions were imposed by the United States, the European Union and other countries and international organisations against individuals, businesses and officials from Russia.

Denying the effects of sanctions

The disinformation on sanctions focuses heavily on sectoral measures. A typical case in our database, is one that falsely claims the EU lost more economically (and politically) from sanctioning Russia than Russia itself. Academic research shows that the opposite is true.

Although the sanctions resulted in a cumulative export loss to Russia, about 0.2% of the EU’s GDP, they imposed a burden on Russia’s economic development since 2014. The International Monetary Fund estimated in 2015 that Western sanctions and Russian counter-sanctions reduced Russian real gross domestic product (GDP) initially by 1–1.5. Russia’s own counter-sanctions have probably had the most impact on Russian people’s welfare, as counter-sanctions result in a price increase for domestic goods, thus increasing population’s consumption expenses, which in turn results in real welfare reduction and higher social differentiation. In 2019, the IMF estimated that the sanctions combined reduced Russia’s growth rate by 0.2 percentage points every year in 2014-2018.

The impact of sanctions was also a factor leading in to the weakening of the Russian ruble and the Russian financial crisis. The sanctions depressed foreign trade and foreign capital flows into Russia, although, the fall of the price of oil had a bigger impact on the Russian economy than sanctions. The Washington Post was unequivocal: “The sanctions have stunted Russian economic growth and sapped the urban middle class of wealth and opportunity.”