No News on the News Front 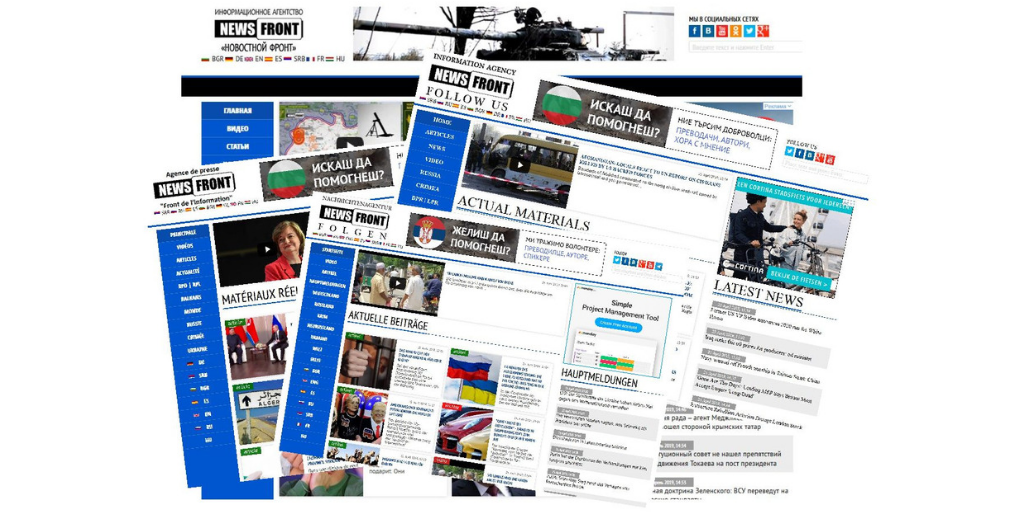 One frequent “guest” on our database of disinformation is News Front – a Russian site, established in November 2014 as a mouthpiece for the self-proclaimed “People’s Republics” of Eastern Ukraine. According to media reports, it’s financed by the Russian state security services, the FSB. It is published in eight languages and has a large audience.

First the hard data: News Front was established in November 2014 at the web host reg.ru. It was visited by slightly below 5 million in March 2019. Half their audience is in Russia, 22 percent in Ukraine, 4.6 in Bulgaria and 3.11 in Germany. The site is published in eight different languages: Russian, German, English, Serbian, Spanish, Bulgarian, French and Hungarian. The site’s Mission Statement (in Russian) declares a bold vision:

News Front – is an information agency of the people, crafted manually by volunteers, who wish to show and tell you the truth from the source. Reportage from combat areas, live coverage of key events of the world, expert opinions and analytical shows – that is News Front.

News Front’s working principle is based on documentary journalism: in an era of technical progress, live broadcast from a telephone tells more than any news anchor in a fancy and expensive studio, and an expert airing on Skype always tell more important things than in a noisy talk show.

The Russian version of News Front is very much devoted to events in Ukraine. The self-proclaimed “People’s Republics” of Eastern Ukraine are massively represented on the site, very often with, just as the mission statement suggests, appearances on Skype. The section for International News is dominated by content from Russian state media outlets RT, Sputnik and RIA Novosti.

The Same Stuff as Always

Generally, the Russian version of News Front offers the same stuff as other pro-Kremlin disinformation outlet. It’s more interesting to study the versions in other languages. The 3.11 percent of the site’s visitors that reside in Germany, for instance…

Here we find a completely different tone. Even the Mission Statement (in German) is louder.

We, the News Front news agency are volunteer fighters of the Information War, fearlessly fighting against cynical lies, distrust, manipulation and disinformation; that is, against all the sort of Weapons of Mass Destruction the West is using against us all in the current form of colonial war of robbers.

Much of the content devoted to Germany has a strong anti-immigration tendency and is to a large extent provided by various European outlets connected to nationalist, anti-immigration groups.

On the other hand, when we look at the English version, the migration topic is entirely absent. One can note that there is no section for British or US News either. Most of the material on this site is collected from Russian sources like RT or New Eastern Outlook. There is also a plethora of material from US and UK “alternative” sites with left-leaning tendencies. The English version is very rarely giving any sources for the articles of the site.

The pattern is similar in all the different languages. In each case, News Front attempts to identify what each audience is most susceptible to in terms of sharing content on Russian priorities. Ukraine or Syria are not major topics for audiences in Germany, Britain, France or Hungary. They would not visit News Front if the site was entirely focusing on Kremlin priorities. But a German audience can be attracted with a trigger-word like “Kulturbereichung” or “Migrationshintergrund“. And British readers react to “Brexit“, “The Collapse of the US” or the “Deep State“.

News Front latches on to any kind of discontent in each target audience, multiplies it and adds some content important to the Kremlin. This way, the Kremlin hopes, Ukraine will be associated with whatever the German audiences hate – feminism, multi-culturalism, migration; while a British audience associate Ukraine with right-wing extremists, US imperialism and colonialism.

There is a quote by the late Chinese leader Deng Xiaoping, the man who initiated China’s ambitious market reforms after the death of Mao in 1976: “It doesn’t matter if a cat is black or white, so long as it catches mice”.

News Front is applying the same Chinese wisdom: They don’t care if the content is leftist or rightist, racist or anti-capitalist. The important thing is to create platforms for Kremlin disinformation.