“No, We Did Not Bomb the Hospital, and It Was a Nest of Nazis Anyway” 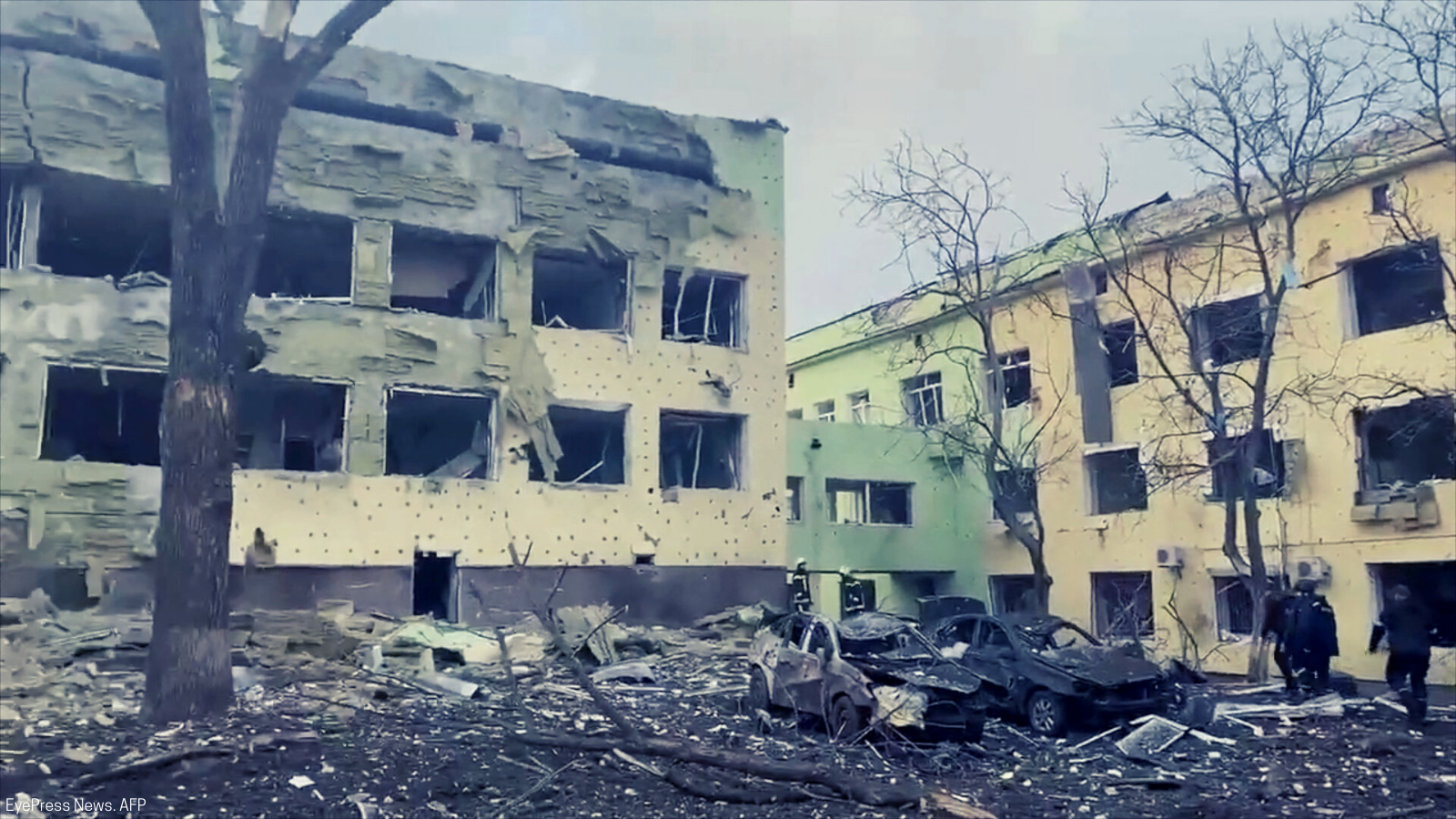 The shelling of Maternity Ward No. 3 in Mariupol is a war crime and took the life of innocent civilians, including children. Top Russian officials confirm the targeting of the facility, but claim it was a stronghold of “radicals”. They are lying.

One can profit from lying. One can tell much more dramatic and colourful stories if not limited to actual hum-drum facts. The disadvantage of lying, however, is that a false statement might and will be challenged against the facts. Another disadvantage is that the liar must remember their own lies correctly every time they lie.

The cynical lies about Mariupol

The attack on a maternity ward in besieged Mariupol illustrates the challenge of lying. 3 people were killed, according to the Ukrainian authorities and 1 following and her baby died of wounds. The facts are easily corroborated; the attack has been carefully documented with a large number of pictures from several sources – professional news photographers, social media updates and forensic investigators. Manuals for open source investigation of Russian troop movements are easily available; thousands take part and share the facts.

The Kremlin, obdurately lying about “not targeting civilians”, is attempting to lie about the attack, but faces both of the disadvantages of lying mentioned above. When Foreign Minister Sergey Lavrov lies about “no attack taking place”, his lying is just naked and not even shrouded in the veil of credibility. He knows he is lying; he knows everyone knows he is lying. Lavrov’s job is to lie, and he performs poorly, just parroting talking points, handed to him by his masters:

We have heard an emotionally charged outcry over the so-called “atrocities” allegedly committed by the Russian armed forces. Three days ago, on 7 March, our delegation at the UN Security Council meeting provided facts to prove that this maternity hospital had been taken over by the far-right Azov battalion, who ordered all pregnant women, medical nurses and other personnel out of the building. You can draw your own conclusions about the manipulation of public opinion around the world. 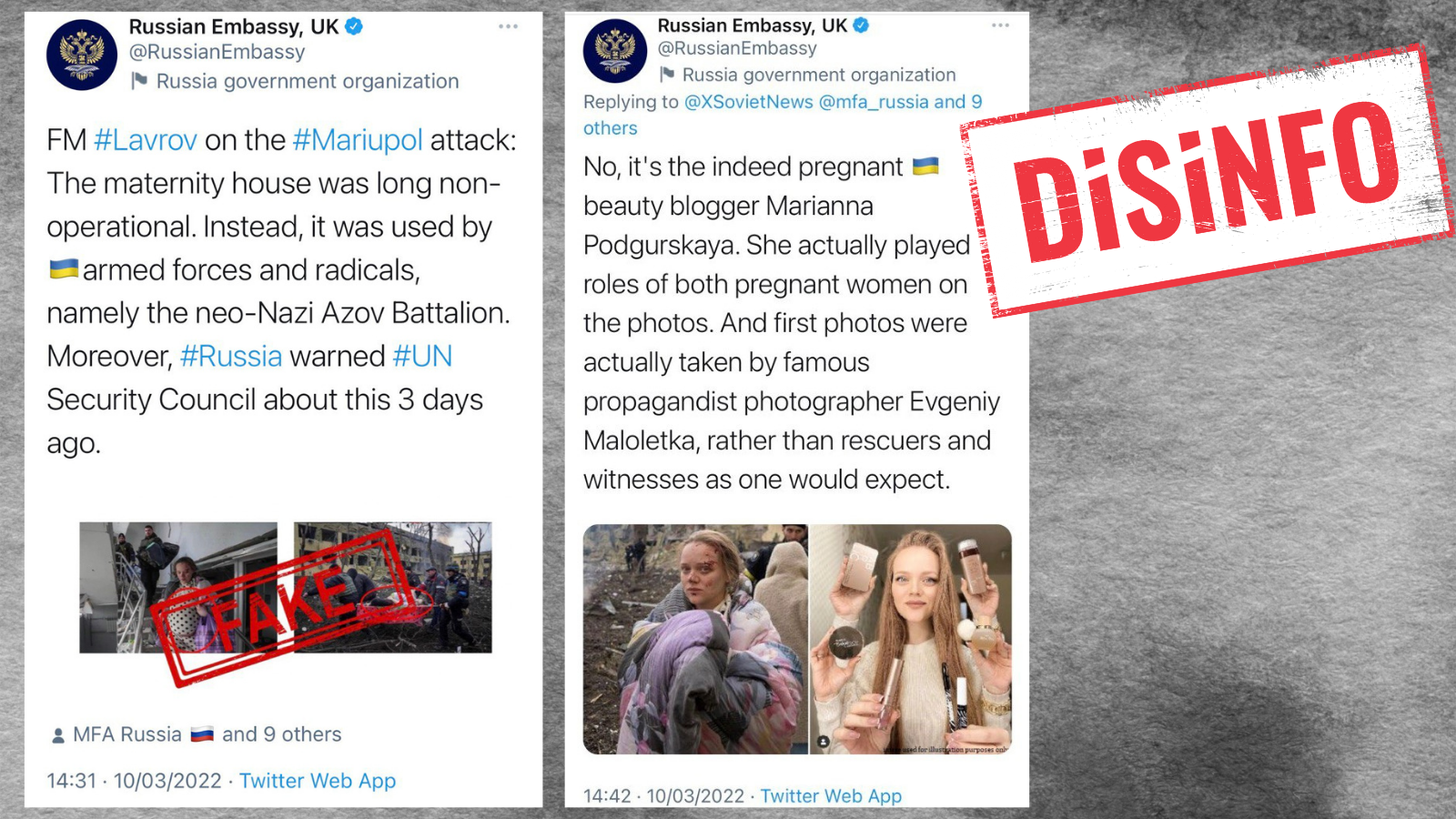 The ever-green, manipulative narrative of the Azov Battalion

One key Kremlin lie about the war against Ukraine is about the country being controlled by Nazis. That very lie has been repeated hundreds of times during the last few years. Still not true.

The Kremlin regularly tries to “prove” the presence of Nazis in Ukraine, including at the highest levels of government, by using the narrative of the Azov Battalion, a unit of some 1,000 men. The unit was originally set up by nationalists in 2013, and donned some insignia with strong connections to Nazism. The Kremlin disinformation machine has inflated this battalion to enormous and absurdly overblown proportions: a fairly small army unit inflated to the size of an entire army. Extremism in Ukraine is a frequent topic for discussions, and the pluralistic society of Ukraine has instruments to handle the challenge of Nazism in the country. All manifestations of Nazism are banned in Ukraine. The Verkhovna Rada, at its meeting of 9 April 2015, adopted a law “On the Condemnation of the Communist and Nazi totalitarian regimes in Ukraine and the prohibition of propaganda of their symbols”. The document recognises that communist and national socialist (Nazi) totalitarian regimes in Ukraine are criminal and prohibits the public use and propaganda of their symbols. The Nazi totalitarian regime at the legislative level is recognised in Ukraine as pursuing a policy of state terror. Also, the right-wing extremists in Ukraine – whose presence no one is denying – are in the margins and have failed miserably in every election since 2014.

Russia, on the other hand, has frequently allowed propaganda for fascism in Kremlin and oligarch media outlets, hailing Franco and Mussolini.

In yet another typical attempt, the disinformation machine peddled accusations against the West: photos documenting atrocities were fake, victims were models, nothing is true and everything is made up by the West in an “information terrorism attempt” against Russia, foreign ministry spokeswoman Maria Zakharova said. There was no attack in the first place, it was a “staged provocation that can deceive the Western public but not an expert”, claimed the Russian Defence Ministry spokesman Igor Konashenkov. 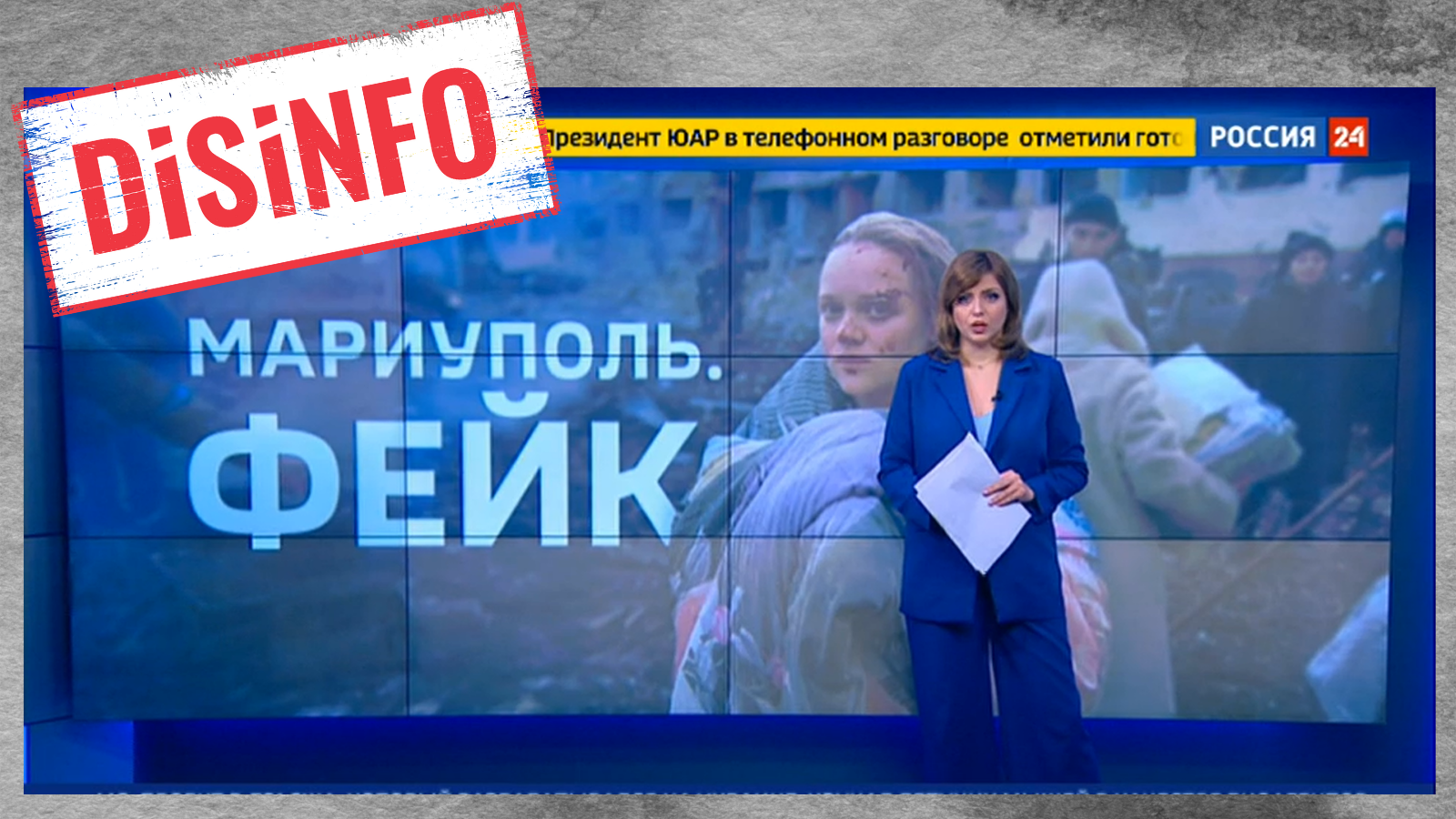 The pro-Kremlin disinformation machine quickly picked up the story. Quoting information from Telegram, Sputnik Mundo said that the images that appeared in The Guardian and The Times were not real and were fabricated by professional models and photographers. The story was also reported by ZeroHedge and Russian diplomatic accounts reported about it under a dedicated campaign to “StopFakes” (Russian Embassy in Spain, Russian Embassy in the Vatican, Russian Embassy in France). In a “fact-checking” attempt, Russian Embassy in the UK identified one of the ‘models’ as a Ukrainian Instagrammer and a beauty blogger. To corroborate its statements of a ‘hoax attack’ in Mariupol, the Embassy on its Twitter account used the blogger’s name and a screenshot of her older post on Instagram on which she does not appear pregnant. Both tweets are now deleted by Twitter.

It takes a real cynic to first kill innocent people, then claim it didn’t happen, and at the same time that it did happen but for a “good” reason (fighting Nazis!). In a tragic turn of the events, a wounded woman evacuated from the maternity ward in Mariupol has died, along with her baby. The other woman, whose face, name and Instagram account were used for the Kremlin’s smear campaign, has given birth to a baby girl but as of March 11 was still in heavily bombed Mariupol. 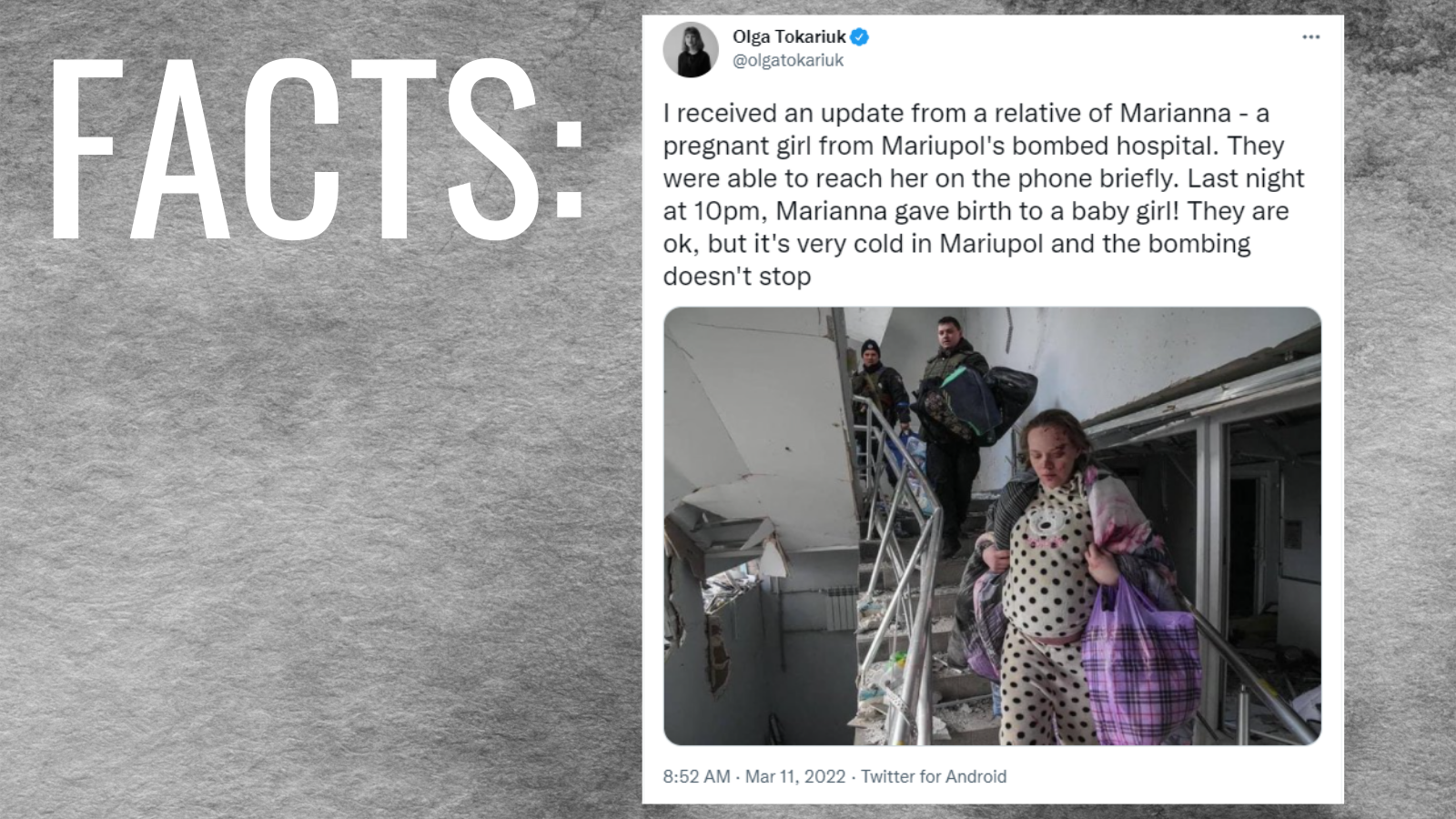 The Kremlin is desperately attempting the well-tested means of flooding the information space with contradictory messages in order to obscure the actual facts. It has attempted the method in the cases of Skripal, Navalny and flight MH17, to mention just a few. Lies and violence are closely knitted in the Kremlin disinformation efforts. Lies are employed to hide the violence; violence is employed to hide the lies. In the meantime, the International Criminal Court has initiated the process of collecting and analysing all documents available for a future case against the perpetrators.

The article was edited on 15.03.2022 to correct the number of deceased persons.