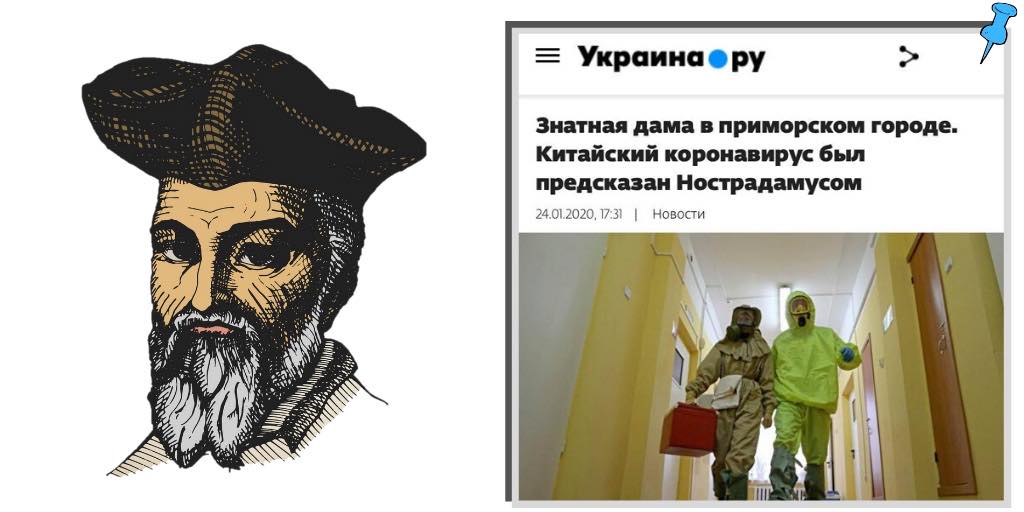 “The Noble Lady in the City by the Sea. The Chinese Coronavirus Was Predicted by Nostradamus.”

Last week, one of Russia’s largest state media companies decided to publish an article under this headline in one of its online outlets.

What could be the motivation for promoting this kind of information? The name of the outlet suggests an answer: Ukraina.ru

The online news portal Ukraina.ru has been operating from Moscow since June 2014 – the early days of the conflict in Ukraine. It is part of the Russian state-owned media holding Rossiya Segodnya.

Even if Ukraina.ru presents Ukraine as its first name, the outlet’s surname, “.ru”, reveals that it is in fact a Kremlin-controlled, Russian-language propaganda project targeting audiences in Ukraine – the country which is one of the most frequent targets of pro-Kremlin disinformation.

Last week’s issue of the Disinformation Review highlighted the Nostradamus story as one of many other examples of conspiracy theories about the coronavirus in pro-Kremlin media.

Other pro-Kremlin media have published similar stories about a Bulgarian psychic who allegedly predicted the coronavirus in the 1970s.

In the case of Ukraina.ru, the claim about the Nostradamus prophecy becomes a small part of a massive campaign, whose aim it is to sow doubt, fear and confusion in Ukraine.

To see other examples of disinformation appearing on Ukraina.ru, follow this link to the EUvsDisinfo database.