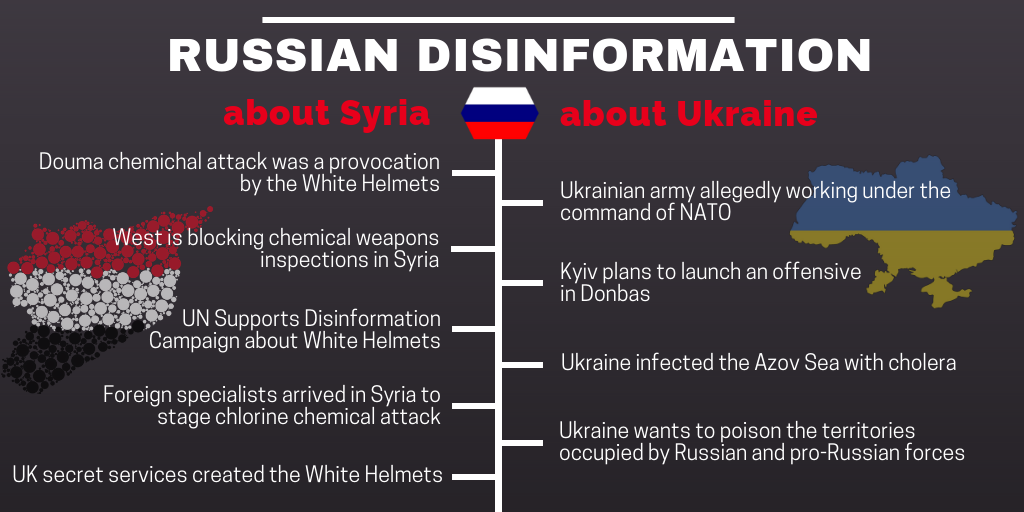 As our favourite parody account Darth Putin frequently reminds us, one of the most repeated disinformation tactics is to accuse your counterpart precisely of what you are doing yourself. The aggressor presents himself as the victim and thus strengthens his core internal audience. External audiences that want to defend the aggressor get the “line to take” they can repeat in their local media, discussion forums and other information channels. And external audiences from the non-expert community (and sometimes even some solid mainstream media) receive an “alternative fact” that makes it harder for them to distinguish what is the truth, and what is an attempt to hide the facts and mislead.

Thus, as Russia has been preparing for the biggest military exercise since 1981 and was expected to resume airstrikes on the Syrian city of Idlib, pro-regime disinformation-oriented outlets were flooding the information space with groundless accusations, focusing on two regions: Syria and Ukraine.

1. In Syria, the pro-Kremlin outlets accused the West and/or the humanitarian organisation White Helmets of preparing a provocation. Involved in spreading these stories was the main pro-Kremlin weekly show Vesti s Dmitriem Kiselyovym; the Russian Army’s channel TV Zvezda; the most important regime bullhorn for Western audiences, Russia Today (RT) ; and official Kremlin representatives from the ministries of defense and foreign affairs.

2. In Ukraine, where the pro-Kremlin outlets recycled some of the four years old pieces of disinformation about the Ukrainian army supposedly working under the command of NATO; accused Kyiv of plans to launch an offensive in Donbas; and of attempts to spread diseases and poisonings in those parts of Ukraine occupied by Russian and pro-Russian forces. In probably the most absurd outburst, the outlet News Front (that has been linked to Russian secret services by one of its former employees) accused the Crimean Tatars of being guilty of the destabilisation of Crimea.

You want to defend against our manipulation? You are manipulating!

A very similar technique was used also in regular TV news show Vesti, that accused the US Democrats of being willing to turn Facebook into a tool for manipulating voters. In fact, the initiative aims to prevent exactly those kinds of manipulation of public opinion that we have seen during the 2016 US elections, and where substantial evidence has been presented that the actor behind the manipulation via social media was Russia.

An essential part of such disinformation attempts is to deny the obvious and keep repeating that there is no evidence of Russian interference, as we have seen yet again, this time from RIA Novosti.

And Russia Today used one tweet from one Member of Parliament in one NATO country to build a case that “NATO plans to break up Russia”. Of course, there are no such plans – but coming back to the tweet mentioned in the beginning of this text: when the intention of a disinformation campaign is to weaken the West, the EU, NATO, one way to obscure this fact is to keep accusing the West of trying to do the same thing.

For audiences that do not know much about the EU, it is very easy to try out ever more outrageous pieces of disinformation. Thus, we have once again seen such complete and unsubstantiated falsehoods as that Europe is close to legalising paedophilia; that the EU is imposing paedophilia on Serbia; and even that it forces Georgian authorities to kidnap children from their parents.

After awarding a football player who stood for equal rights and wore a rainbow armband during a game, UEFA got accused of the “pederastisation” of football“.

Similarly, in an echo back to one of the most popular articles on our website (“No, Denmark is not legalising sexual abuse of animals”), Sweden, Germany and Denmark were all accused that necrophilia and bestiality are a norm in these countries. And finally, from the “oldies but goldies” section, we have heard once again that the EU is a Nazi project invented by Nazis in Nazi Germany.

No, this is still nonsense, and always will be. No matter how many times you repeat a lie, it will still not become the truth.