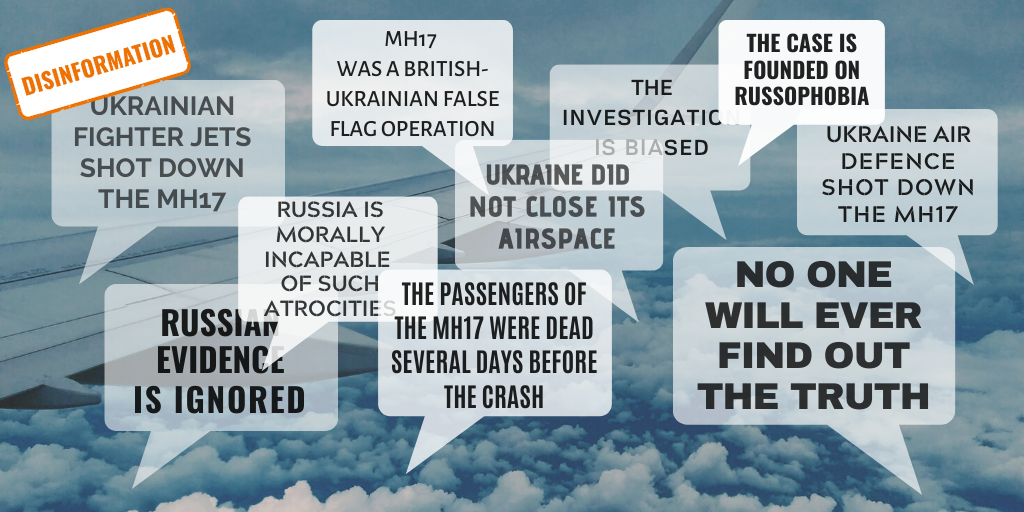 Kremlin Tactics to Discredit the JIT

The Russian Institute for Strategic Studies, RISS, a Kremlin-funded think tank, published recently an essay with the title “Securing Information for Foreign Policy Purposes in the Context of Digital Reality”. The paper is quoting Russian military theorist Aleksander Bartosh who describes “disinformation and propaganda in media and social networks are the main characteristics of so-called hybrid warfare”. The authors of the paper notes:

This method, preventively shaped narratives, is highly visible as we approach the MH17-trial, where three Russian nationals and one Ukrainian are charged as responsible for shooting down a civilian passenger jet in July 2014. In February, Russian state-controlled media referred to a documents, allegedly leaked from the Joint Investigation Team, “proving” that no BUK missile system was within shooting range when the MH17 Boeing was downed and 298 passengers were killed. The documents do not prove anything, but it looks cool: scanned, blurry documents, leaked by whistle-blowers, risking their careers, if not lives…

The MH17 case is highly present in our disinformation database; over 200 cases to date. The cases group along five major themes, with our explanations below:

“The investigation is biased!”

“Ukraine is the culprit!”

“The West is the culprit!”

“Russia is morally incapable of such atrocities!”

“No one will ever find out the truth!”

These five themes make it easy to produce and fine-tune disinformation to domestic and foreign audiences, illustrate them and amplify them on social media platforms and State-financed media. The approach is there, any kind of facts or evidence can easily be disregarded through these carefully cultivated narratives. The model, outlined by Russian military specialists works perfectly: preventively shaped narratives. Lying beforehand to occupy the information space.

Government of the Netherlands: Official information on the MH17 investigation