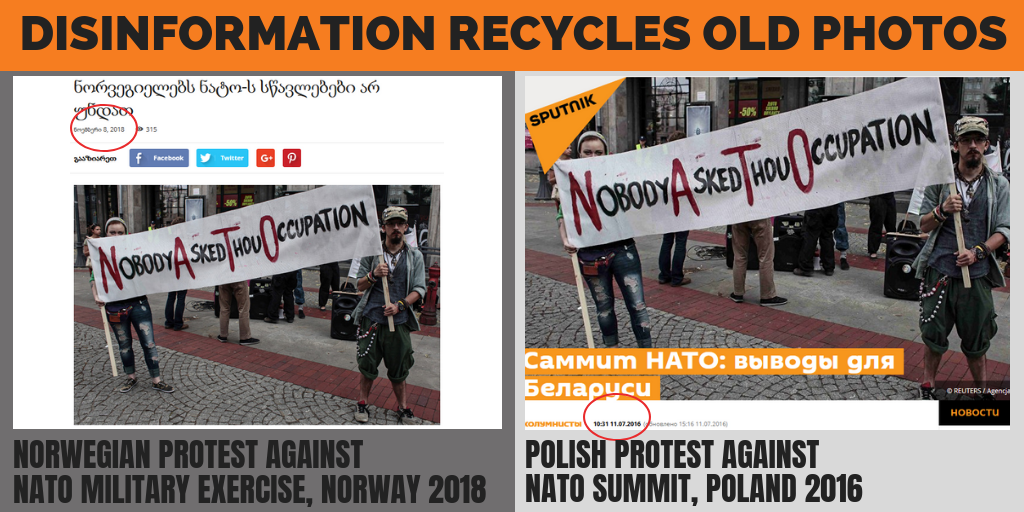 “Nobody Asked Thou Occupation”, a protest sign says in an image. If you just have a quick look, it is hard to see where and when this photo was taken.

So it was a convenient way for the pro-Kremlin propagandists to illustrate articles about Norwegians allegedly protesting against a recent NATO exercise. The image illustrated stories in Georgian and Russian outlets in November.

But if you zoom in and pay attention to the tiny advertisement in the background, you will see three words in Polish: złoto, srebro, brylanty: Gold, silver, diamonds.

Myth Detector’s fact-checking and a Google reverse image search show that the same photograph was in fact taken in Poland already in 2016.

From the point of view of the disinformation campaigner, the picture has one advantage: it includes the keyword occupation. The pro-Kremlin disinformation campaign seems to be obsessed with claims about occupational forces. It repeats messages that not just Syria, Ukraine, Georgia, Czech Republic or all the Eastern European countries but all of Europe is under either US, NATO or German occupation. At the same time, it appears that Ukraine is also occupied by the EU. See the links to set the record straight.

And talking about far-fetched disinformation lines: the old campaign against Hillary Clinton surfaced in Georgia once again, when one outlet scooped that Clinton dedicated her thesis to Lucifer! When you have stopped laughing, check the facts here.

Ukraine on the frontline

This week, pro-Kremlin outlets have been accusing Ukraine of being a failed Nazi state that’s preparing for a military solution in Donbas whilst being simultaneously the impotent puppet of the US and EU. According to Russian media, all of this is happening because Ukraine is just a victim of the geopolitical and economic interests of the United States.

The unavoidable military escalation between Ukraine and Russia is an often spread narrative by the pro-Kremlin outlets but this week they have been more focused on the false claims that the US “splatters blood on Ukraine”. The main idea behind is to show Ukraine has little to say on its own future and foreign policy. Reality-check: Ukraine is a sovereign state recognized by all the UN members, with a legitimate government.

Of course this doesn’t bother pro-Kremlin media as they tend to describe Ukraine as a failed state. This time they have pointed out real problems with supply of hot water and heating  and made it look like the entire country has cold shivers whilst standing on the brink of social unrest.

But enough about politics: isn’t it true that in reality an average Ukrainian is a nice person? Well, not according to Russian media which indicates that people in Ukraine call Russians “non-humans” and are eager to kill them – and ready to announce Adolf Hitler a national hero. If you look at our database, it seems that in reality it is only in the pro-Kremlin disinformation that Hitler is still a main protagonist.

Date
Title
Outlets
Country
Belarusians will be taught to fear Russia
Belarus, Russia
US conspiracy against a Russian in Interpol
US, Russia
Macron urged EU countries to abandon their sovereignty
France, Germany
NATO generals scared to death by Crimean bridge
Ukraine, Russia
‘Highly likely’ that Magnitsky was poisoned by toxic chemicals on Bill Browder’s orders
Russia
Lawyer Sergei Magnitsky may have been poisoned on the orders of William Browder
US, Russia
Ukraine governed by a Nazi regime, Ukraine preparing a military solution to the conflict in Donbas
US, Ukraine
US transforming Ukraine into a kamikaze again
US, Ukraine
Americans preparing a revolution in Donbas
US, Ukraine, Russia
Aim of NATO's exercise: prepare for the annexation of Russia’s Kaliningrad region
Norway, Poland
Migrants are being Islamized in Europe
Germany
Merkel recognized the failure of the German migration policy
Germany
Ukraine and the USA do not condemn Nazism
US, Ukraine
Ukraine is going to make Adolf Hitler a national hero
Ukraine
Ukraine relies on Nazis in the fight against Russia.
Ukraine
Ukrainians call Russians non-humans and want to kill them
Ukraine, Russia
Rukban camp on area occupied by the US, like a Nazi concentration camp
Syria, US
In Ukraine neo-Nazis are integrated into the system of power
Ukraine
Baltic states frightened by the single European army
Baltic states, Latvia
Hillary Clinton dedicated her thesis to Lucifer
US, Russia
EU wants to ensure Ukraine will continue the war with Russia
Ukraine, Russia
NATO ordered Finland to accuse Russia of GPS disruption
Finland, Russia
US to splatter blood on Ukraine to prevent the improvement of EU-Russia relations
US, Ukraine, Russia
Secret documents: America recognises the independence of Abkhazia
US
The Swiss are provocateurs who want to escalate tensions between the West and Russia
Switzerland, Russia
"Cold" riots throughout Ukraine
Ukraine
Photo shows: Norwegians do not want NATO exercises
Norway
Poland is leaving the EU
Poland