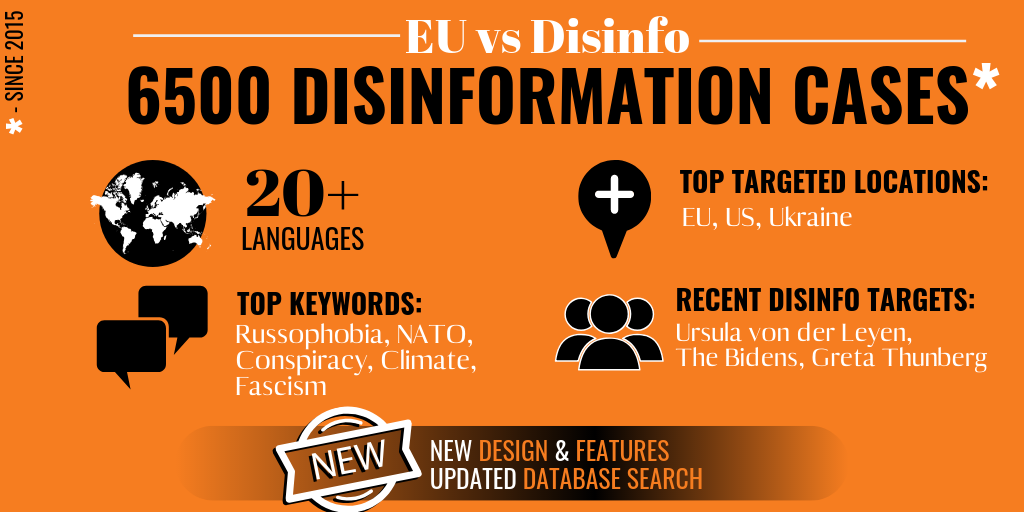 How do you mix Latvian sprats with Russophobia? Was Hunter Biden trying to push for a war in Ukraine? What other disinformation ”treasures” can be found in the EUvsDisinfo database? And how do you cure a disinformation hangover?

Latvia’s main activity is the trade of Russophobia! – says one of the disinformation cases which we collected for you this week. Oddly enough, the authors of the article were trying to link this somehow abstract allegation to ‘prove’ that Russian counter-sanctions (imposed on EU countries in reaction to their sanctioning Russia for its aggression in Ukraine), are destroying Latvia’s fishing industry. In other words, a classic case of mixing apples and oranges (and sprats, in this case), or using a disinformation claim to make a point without any evidence.

Interestingly enough, the first case ever to be recorded in the EUvsDisinfo database (revamped this week!) was throwing accusations of Russophobia too, though from a different angle: Students of Lviv University in Ukraine who used Russian social networks would not be allowed to pass their exams, it said. In reality, pro-Kremlin media blew a personal post by one of the university teachers out of proportion, and the claim was officially denied by the university itself.

Over four years and 6,500 disinformation cases later, we can still see the same old narratives being repeated over and over again. For example, the keyword ”Russophobia” gives away 235 individual cases. Moreover, our online library (also refreshed), where you find the largest online collection of publicly available studies devoted to pro-Kremlin disinformation, is bursting with examples of malicious tactics, narratives and information manipulations.

Check out how EUvsDisinfo database of disinformation cases works.

Was Hunter Biden pushing for a war in Ukraine?

Pro-Kremlin outlets keep delivering. But even cases that look as if they are new, turn out to be stale tales. This week’s Disinformation Review includes, among others, a number of cases about Hunter Biden. Pro-Kremlin media are not shy to cover him or his father, Joe Biden, given the recent allegations about the alleged US interference in Ukraine’s affairs. But would you expect Hunter Biden to be blamed for pushing for war in eastern Ukraine? In the pro-Kremlin disinformation world, everything is possible and explainable if it serves the purpose of discrediting Ukraine. In this case, Hunter Biden’s alleged eagerness to start a war was supposed to benefit Burisma, an energy company he worked for, to expand drilling in Donbas. However, if you check against the EUvsDisinfo database, you can see that the first case targeting Hunter Biden appeared already in February 2016, whereas Joe Biden’s alleged suggestion to break up Ukraine was featured already in December 2015.

This whole effort was made to pass on the narrative about Ukraine as a ”failed state”, not sovereign, but always and inevitably under someone else’s thumb; be it the US, NATO or the EU. And in case you did not believe this, pro-Kremlin media got something else for your taste: a story of Ukraine who interfered in US presidential elections!

Ukraine has been the main target of pro-Kremlin disinformation for a long time now, and this week’s batch of disinformation cases proves it again. All in all, roughly one-third of the cases in our database are devoted to Ukraine, in this and other contexts. And we debunked all of them. If two wrongs don’t make a right, then over two thousand wrongs won’t do the trick either.

Check out the variety of publications collected in the EUvsDisinfo repository.

While playing on the same narratives, pro-Kremlin outlets are constantly searching for new channels to spread their messages. One of our recent discoveries is EP Today (short for “European Parliament Today”) – a self-proclaimed “monthly news magazine for the European Parliament”, which tries to portray itself as related to the EP, but in fact spreads disinformation messages straight from disinforming outlets such as RT. Well, if it looks like a duck, quacks like a duck, denies it’s a duck… everyone can do their own math.

Connoisseurs say that the really good wine ages well – the older the better. But old narratives, even in new bottles or poured into nice glasses, are only causing bad hangovers. The good news is that these hangovers can be cured! Check EUvsDisinfo’s latest analyses below; go to the online library; browse through our database or have a go at our narrative generator and see what comes out! You will feel better right away.

Date
Title
Outlets
Country
Ukraine will fight with Donbas and kill its people
Ukraine
Ukraine was planning to sell its products to the EU but it isn’t happening
Ukraine
Ukraine's plan B is war
Ukraine
Ukrainians are part of the Russian people
Ukraine, Russia
During Petro Poroshenko's presidency, anti-Russian hysteria was going wild in Europe
Ukraine
Ukraine is not only anti-Russian, but also anti-European project of the US
US, Ukraine, Russia
In Ukraine, schools will be closed in large numbers
Ukraine
The main activity of the Latvian state is the trade of Russophobia
Russia, Latvia
Russia didn't hold nuclear war exercise against Sweden
Sweden
The war in Donbas began after Ukraine banned the Russian language
Ukraine
The phenomenon of the "Russian threat", "Russian trace", and "Kremlin hands" is becoming weird and unhealthy
Norway, US, Russia
Ukraine's Prosecutor General sees potential involvement of Biden in up to 15 criminal cases
Ukraine
The USA persistently imposes confrontation with Russia on Europe
US
Relations between Russia and the West deteriorated due to civil war in Ukraine
Ukraine, Russia
Russo-Georgian war was a war for independence
Georgia, Russia
Poland wants to divide Europe into two camps to strengthen its leadership within Europe
Poland
The Molotov-Ribbentrop Pact is not an “unusual” document
USSR, Poland, Germany
The public opinion is turning from politically correct liberal ideology to mental illness
Norway
The US has turned Ukraine into a puppet
US, Ukraine
Ukraine never fulfilled Minsk agreements
Germany, Ukraine
Ukraine is waging a civil war in the East of Ukraine
Ukraine
The resolution of the European Parliament shows that Europe has become insolent
Denmark, Italy, UK, France, Germany, Lithuania, Estonia, Latvia
The Munich Agreement triggered WWII and the USSR was completely ignored
USSR, UK, France, Germany
The change of the situation in Donbas depends solely on Kyiv
Ukraine, Russia
Europe is no longer interested in supporting Ukraine
Ukraine, Russia
Greta Thunberg "created" as a tool by cynical adults
Russia
Allegations of Russian meddling in US elections are absolutely insane
US, Russia
ECHR might rule to treat Russian control of Crimea as legal
Ukraine, Russia
Ukraine surrenders its sovereignty to the EU and NATO
Ukraine
The US controls everything in Moldova
Moldova, US
The US promotes ‘balkanisation’ of Mexico to annex rich northern regions
US
NATO is pursuing a real war-preparation policy for Europe
US, Russia
2014 Kyiv coup led to Crimea referendum and Donbas war
Ukraine, Russia
The US and the West are behind Hong Kong protests
Hong Kong, China, US, Russia
Hybrid troops in Donbas did not kill the famous opera singer, but a terrorist
Ukraine, Russia
US troops will not defend Poland in case of a Russian attack
Poland, US, Russia
Russia is the global champion of free speech
US, Russia
Greta Thunberg's fight far from real problems, like ISIS from true Islam
Sweden, Russia
Ukraine has been ruled by a US-funded client regime since 1991
US, Ukraine, Russia
Joe Biden's son pushed for war in east Ukraine to clear the territory for fracking
US, Ukraine, Russia
Czechia intends to build hotels in Crimea
Czech Republic, Ukraine, Russia
Hong Kong's protests will depend on the US, as they are the organisers of the revolt
Hong Kong, US
By continuing to browse the site you are agreeing to our use of cookies.