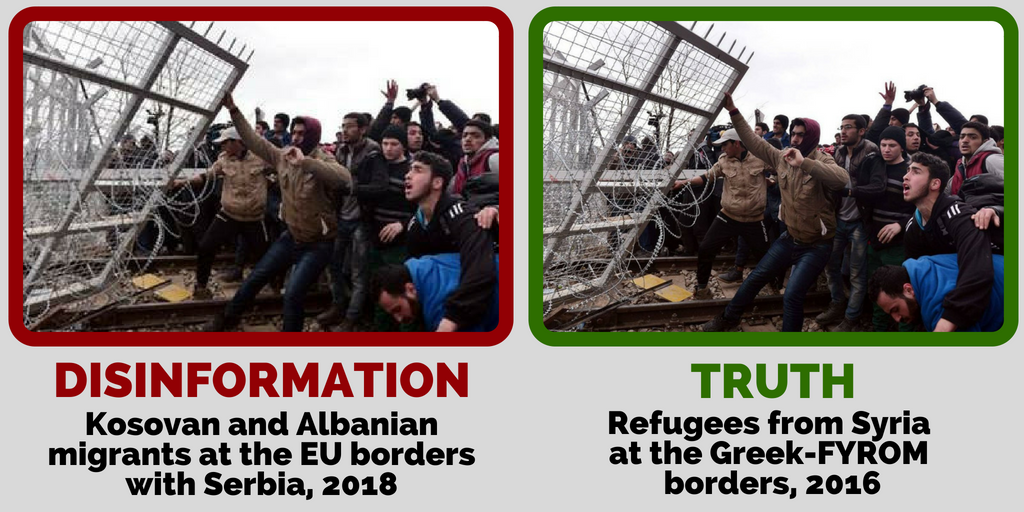 On May 14, news agency “News Front” published a story including an image of “Kosovan and Albanian migrants storming EU borders” from Serbia. The story was published on News Front’s English, German and Spanish sites.

According to Brandwatch analytics tool, the story achieved 48.507 impressions on Twitter and was tweeted by disinformation-related accounts in the Netherlands, Serbia and Slovenia, among others.

News Front is a growing Russian news agency that is run from Crimea, created to “fight in the information war” and is frequently spreading disinformation. According to Die Zeit, the agency is partly funded by the FSB, Russia’s security service.

The devil is in the details: by running a reverse image search, we found out that the photo is from February 2016. It was taken at the border of FYROM and Greece and shows refugees, mainly from Syria, and migrants. Outlets such as The New York Times and Kathimerini used it back then.

Moreover, we found that the photo itself has served disinforming purposes on various occasions. On January 8, 2018 it depicted “200 migrants storming the Morocco-Spain border”, according to stormfront.org.

In July 2017, websites like usdefensewatch.org and ladylibertynews.com used the picture to illustrate how George Soros was “in alliance with the EU to flood Europe with refugees”.  In May 2017, it showed refugees fleeing from Germany due to the suffering and humiliation they encountered there, according to arabinworld.com.

The pro-Kremlin narrative about migrants

Disinformation messages with the keyword “migration crisis” reported in our database