One Lie Per Minute 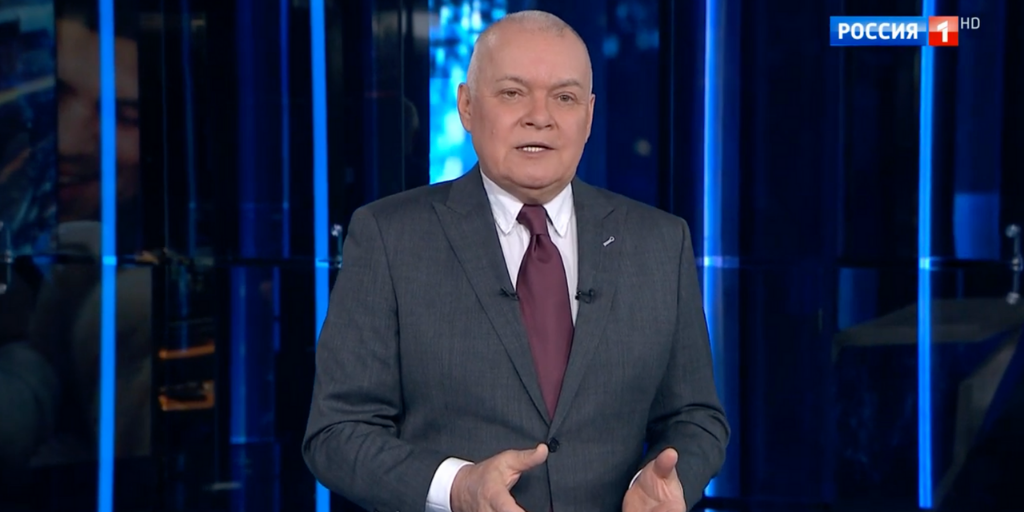 Dmitry Kiselyov keeps living up to his reputation as one of the Kremlin’s most passionate propagandists.

On 17 March, while celebrating the fifth anniversary of Crimea’s annexation on his show, the Russian state TV host managed to formulate a total of three lies in a matter of less than three minutes.

However, Mr Kiselyov’s statements were picked apart already on the following day in an article titled “Dmitry Kiselyov’s Three Fakes at the Anniversary of Crimea’s Annexation“, published by the independent Russian outlet The Insider.

The “American military base” in Crimea

“Five years ago, Crimea returned home. And it’s scary to imagine what would have happened if it hadn’t been for the Crimeans”.

The first claim identified by The Insider as disinformation followed immediately after:

“The Americans were already planning their own military base in Sevastopol…”

The Insider looked into the history of this claim, which still stands centrally in the Kremlin’s Crimea narrative, but was not able to find sources that could confirm it:

On 5 May 2014, i.e. almost two months after the annexation, a Russian online news outlet published an article, which included the claim about US bases in Crimea; but the article is based on speculations and includes no sources that would support the narrative.

The claim reappeared in an article published by the Kremlin-loyal outlet Regnum in June 2016, which quotes a former CIA officer for claims supporting this scenario; but as pointed out by The Insider, Regnum does not mention that the officer in question left CIA service already in 1990.

Shortly after the Regnum article was published, president Putin repeated the claim in Oliver Stone’s 2016 documentary Ukraine on Fire.

The second statement by Mr Kiselyov about events in Crimea in 2014, which The Insider challenged, was the following:

“Poroshenko, who was expelled from the Crimea a week before the referendum…”

Petro Poroshenko, who later became Ukraine’s president, was indeed stopped from visiting the local parliament building during a visit to Crimea in February 2014 when he was still an MP.

However, as The Insider explains, the people who hindered his access can hardly be identified as the “Crimeans” Dmitry Kiselyov refers to in the same sentence.

According to The Insider, the people in question were rather the “little green men“, i.e. Russian military personnel, stripped of their insignia – and thereby themselves as part of the Kremlin’s disinformation campaign supporting the operation on the ground in Crimea.

Finally, The Insider addresses the following statement in Dmitry Kiselyov’s propaganda about Crimea:

“Last year, as the head of Crimea Sergey Aksyonov stated, the peninsula was visited by 6 million 800 thousand tourists – more than in the entire post-Soviet history”.

Dmitry Kiselyov is right about two things here: beautiful Crimea has many good reasons to be a potentially popular tourist destination and Sergey Aksyonov, the head of the peninsula’s local government, has indeed spoken about booming tourism in Crimea.

However, even Kremlin-loyal sources suggest that the numbers are exaggerated. The Insider quotes the head of Russia’s National Tourism Intitiative, Alexander Zheleznyak, as saying that “local officials claim that 6 million people visited the resort. However, experts in the field of tourism call more modest numbers and estimate the statistics of tourist traffic in 2018 at 4.5 million people.”

Incidentally, Dmitry Kiselyov is himself likely to contribute to Crimea’s tourism industry. At least he will not be visiting European destinations on his vacations thanks to the EU sanction he earned himself already in 2014 for being a “central figure of the government propaganda supporting the deployment of Russian forces in Ukraine”.

Crimean Limbo: How Low Can You Go?