One World, One Author, One Chain of Command 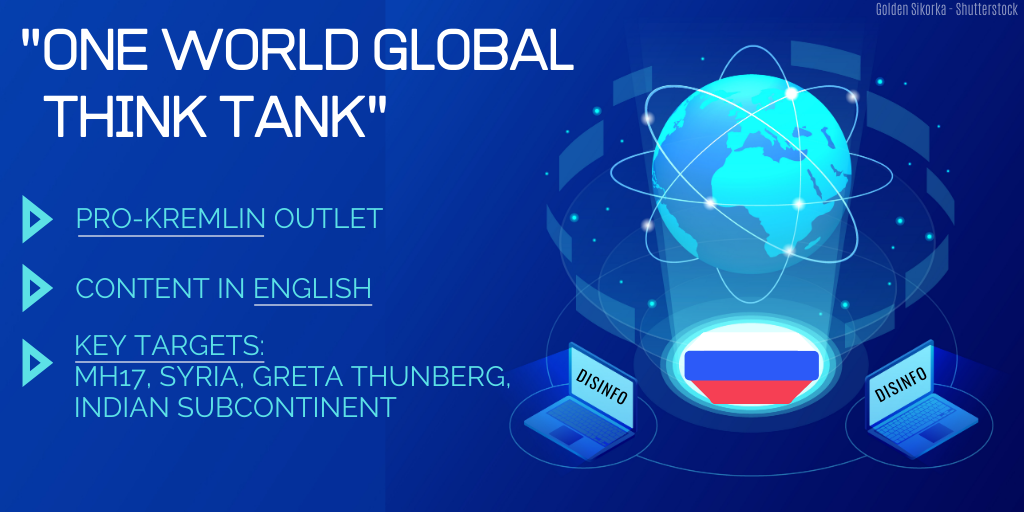 The “One World Global Think Tank” is a new addition to the pantheon of Moscow-based disinformation outlets, publishing material in English. EU vs Disinformation has presented The Strategic Culture Foundation, New Eastern Outlook and South Front. News Front has also featured on our website.

One World is just as all the above-mentioned registered and managed from Russia. A whois search shows that the site is registered with the RU-CENTER registrar. The content of the site is loyally following the Kremlin line on issues like MH17, Syria or Greta Thunberg. A unique feature of the site is its strong coverage of the Indian subcontinent. We can also note an affiliation with Pakistani resources. The site is very small: in fact, too small for the web analysis tool Similar Web to produce traffic data. But dispite its lack of weight, it certainly has influence.

Most of the content of the site is provided by an Andrew Korybko. He presents himself as “Moscow-based political analyst” on his Twitter account. Andrew Korybko is also a frequent contributor to other English-language, Russia-based outlets: Katehon.com, Sputnik, Geopolitica.ru and Oriental Review. As we can see from the presentation on Sputnik, Mr. Korybko is also affiliated with the Institute for Strategic Studies and Forecast of the Moscow Peoples’ Friendship University of Russia. Mr. Korybko is as Andrei Korybko, in Russian Андрей Корыбко, member of the Institute’s expert council. This ties Mr. Korybko to Russian state structures. 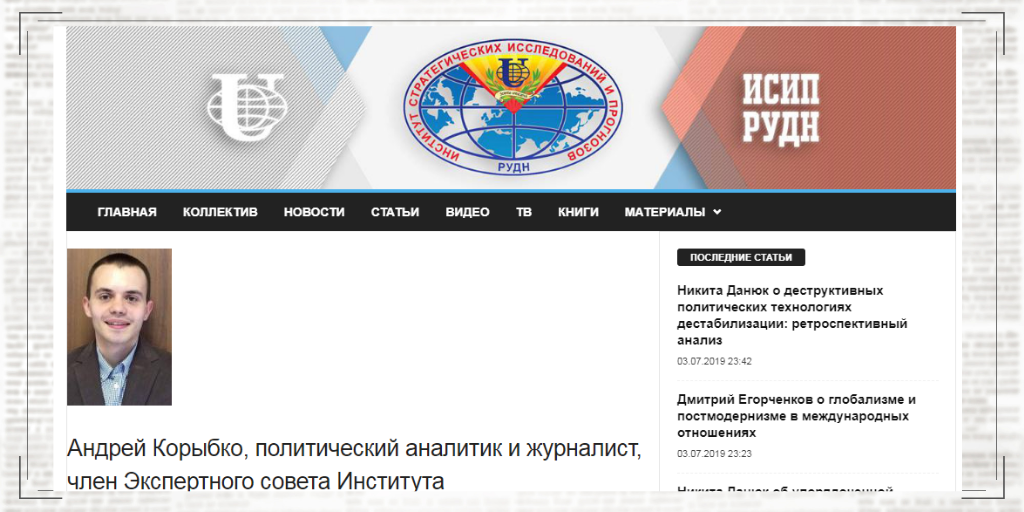 The US based writer Andrei Raevsky, known under his nom-de-guerre The Saker, has published an interview with Mr. Korybko where he explains his background. Born in the US in a family with Slovenian-Polish roots. After studies in Poland, he enrolled with the prestigious Moscow Institute of International Relations:

I’m attracted to Russia not only because of my familial connection with the country, but actually mostly because it’s the only state that has the capability of firmly standing up to the US and supporting the ideas that I believe in, particularly multipolarity. As a Slav, I sensed in Russia the spirits of resistance, independence, and wisdom, and I knew that one day it would rise from its knees to push back against the US’ unipolar chaos.

We have established that Mr. Korybko is connected to Russian state structures – the Peoples’ Friendship University of Russia in Moscow. We can note that he is a frequent contributor to Kremlin disinformation outlets: Sputnik, RT, Geopolitica.ru etc. 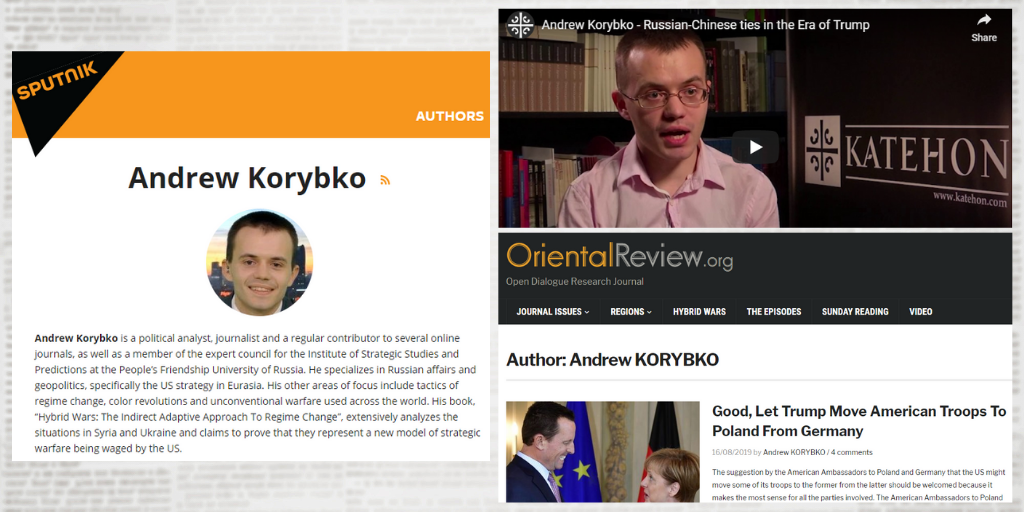 Returning to the One World site, we can see that Korybko is describing events in Bolivia as the result of a “hybrid war”, waged by the US against Latin American states. An article of the 12 November 2019 on One World is reproduced at Canadian Global Research the same day, US registered, French language Réseau International on the 13th. Korybko’s posts on Bolivia appear on blogs and news aggregators, spreading virally.

The One World site has a section on “partner blogs”, allowing further mapping of the reach of the site:

When Lenin established his newspaper Iskra in Munich 1901, he wrote that the newspaper is not only a collective propagandist or a collective agitator; it is also a collective organiser. Lenin’s Iskra was published in German, and its audience were in Tsarist Russia. Very few issues of the paper ever reached its designated audience; but the complicated network of smugglers, adventurers, idealists that took part in the dangerous task of transporting the paper to Russia became the core of Lenin’s party.

Korybko’s tiny outlet has this function: the disinformation outlets in the network do not only spread false information, sow discord and confusion – they establish a system of loyalty; a chain of command from the Kremlin to the outlets that share the Kremlin’s narratives.