All Quiet on the NewsFront? Part 1 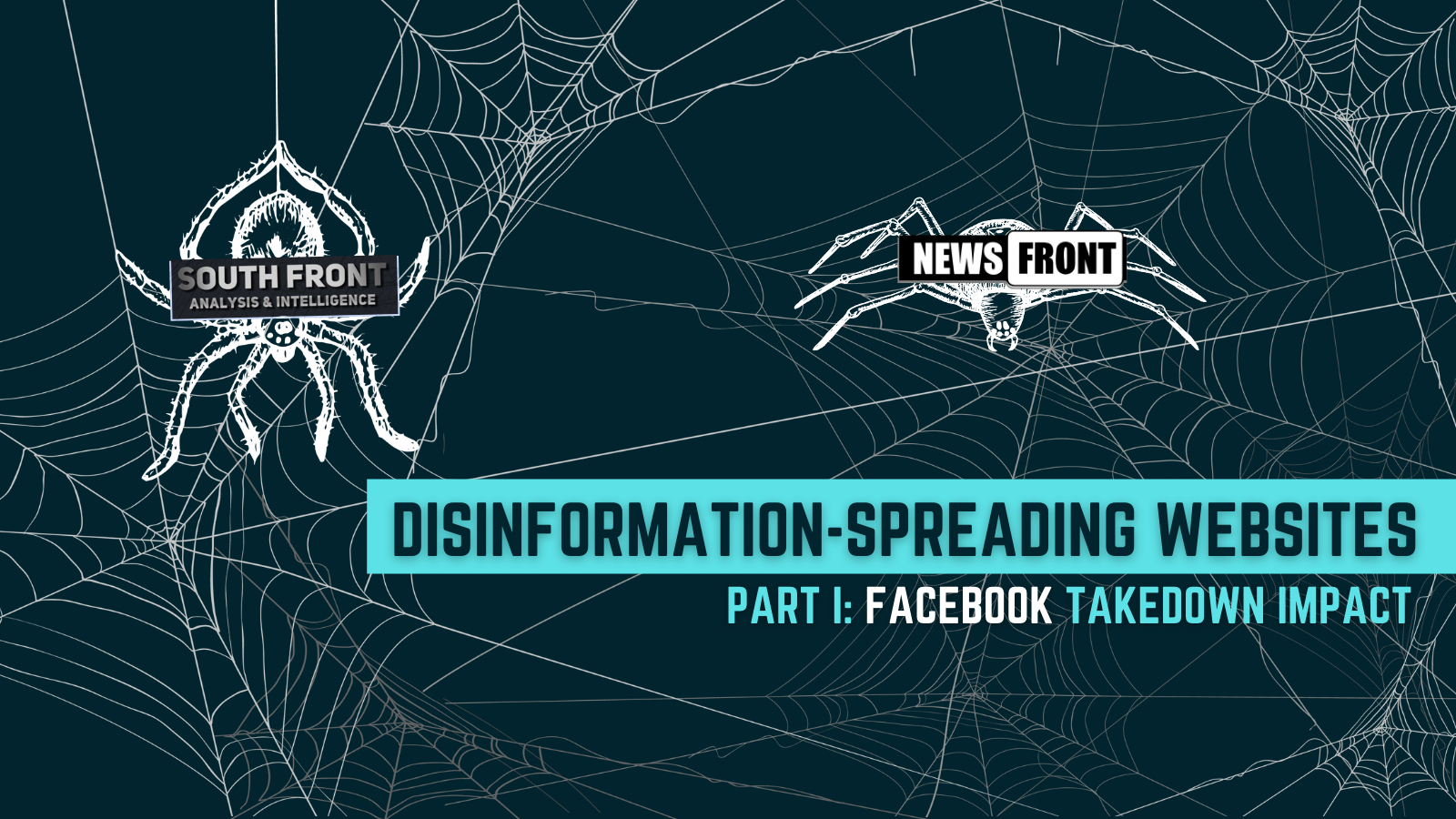 Facebook takedown has only minor effect on pro-Kremlin channels

Facebook accounts affiliated with disinformation-spreading websites SouthFront and NewsFront were taken down last year. But the websites managed to attract visitors anyway. Here’s the first of two parts of EUvsDisinfo research into the takedown’s impact.

Major social media platforms often perform takedowns of accounts engaged in inauthentic coordinated behaviour (explained here). If the accounts break the terms of services, they are taken down, so that they don’t manipulate the social media users anymore. Logically, the expected outcome of a takedown of accounts linked to a website would be a drop in the number of people actually visiting the website.

In April 2020, Facebook took down a network consisting of 46 pages, 91 accounts, 2 groups and 1 Instagram account. It linked individuals in Russia, the Donbas region in Ukraine, and the Crimea-based media organisations SouthFront and NewsFront (both well represented in the EUvsDisinfo database and identified as regularly spreading pro-Kremlin disinformation). Additionally, the domains were blacklisted from being shared, meaning that an attempt to share a link to the websites results in an error message, announcing that the link shared goes against Facebook’s community standards.

With such a widespread blocking of the websites’ access to promotion and organic sharing on Facebook, one could expect that the traffic to the two websites would be significantly reduced.

However, Facebook continued to be a source of traffic for both websites, even if on a lesser scale. Moreover, both websites ended the year 2020 with more or less the same levels of overall traffic. How did that happen?

Our findings show that following Facebook’s takedown in April 2020, Facebook traffic to these sites has fallen somewhat. But this decline was part of a broader trend in falling social media traffic that did not neatly correspond to Facebook’s actions in April. By the end of the 2020, total traffic was more or less the same, with links from other sources – including Wikipedia (see part 2 of our research) – taking up part of the slack.

Regarding SouthFront, Semrush data reveals that in absolute terms, Facebook traffic amounted to 32,000 visits in March 2020 and fell to 11,000 in April (in percentage share: 5.66% to 3.34%). Later, however, traffic recovered, rising to 31,000 visits in August before stabilising at around 23,000 visits a month during the rest of the year. 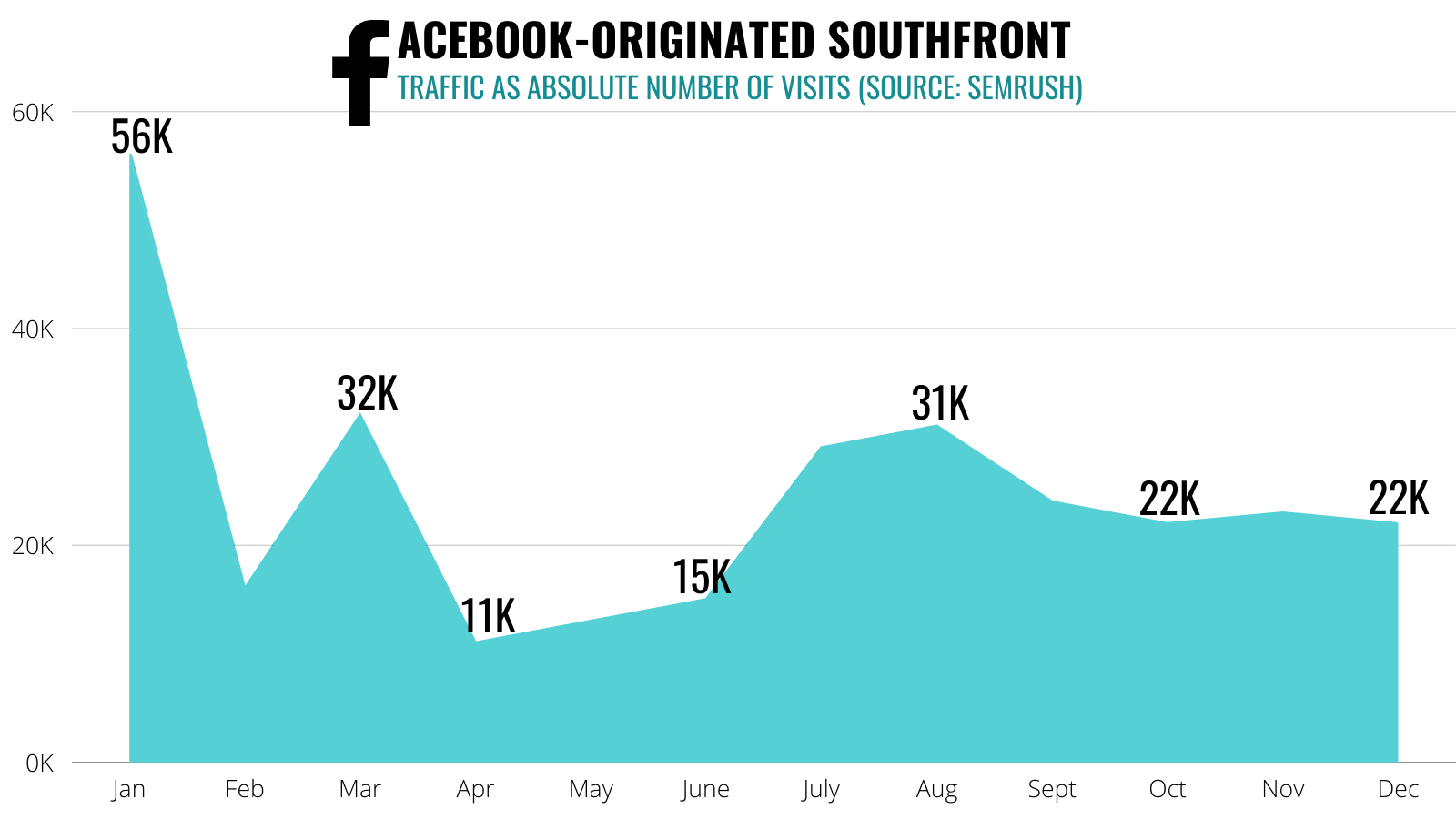 NewsFront was a different story. Total Facebook traffic actually rose from March to April from 163k to 178K (in percentage of total traffic on the website: 8.59% to 10.46%). After a further slight increase in May, it fell before stabilising at around 4% of total traffic. 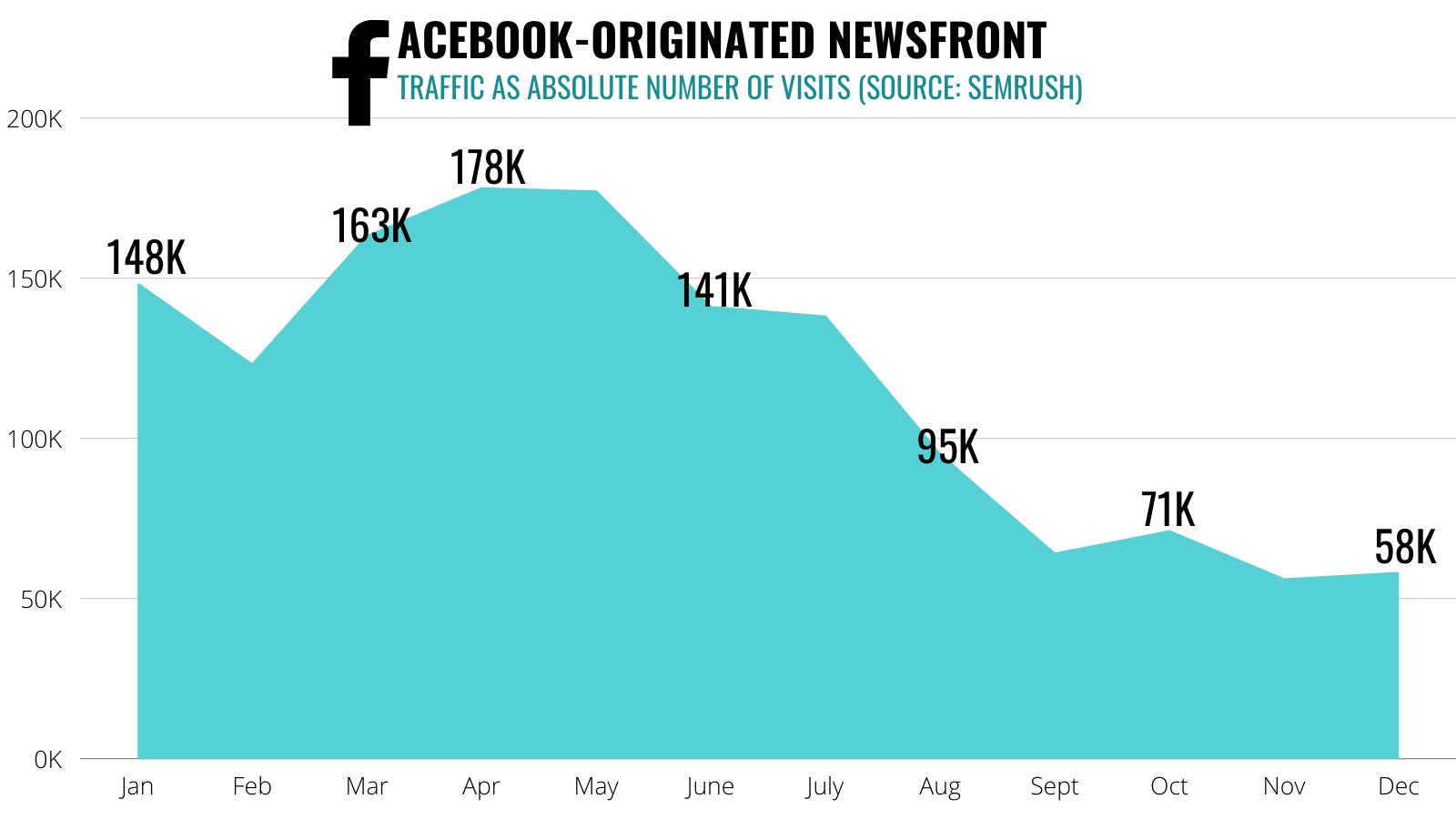 Facebook remained an important source of traffic to both websites. For comparison, the graph below shows the importance of Facebook traffic before and after the takedown.

How is it possible that Facebook still, unwillingly, generated traffic to both websites? One of the explanations would be that the rollout of the ban was inconsistent and that links in older posts are still accessible to at least some users. However, without further details on the nature of the takedowns and blocking – which could only be provided by Facebook itself – this will remain a hypothesis.

For both SouthFront and NewsFront, we noticed a broader trend: a decline in traffic from all social media platforms. These sites maintained their overall levels of traffic with growth from direct traffic, such as users typing website addresses directly into their browsers or, perhaps more likely, sharing links with messaging apps and search engines.

How did the pro-Kremlin websites circumvent the takedown? We will explain that in the second part of our research. 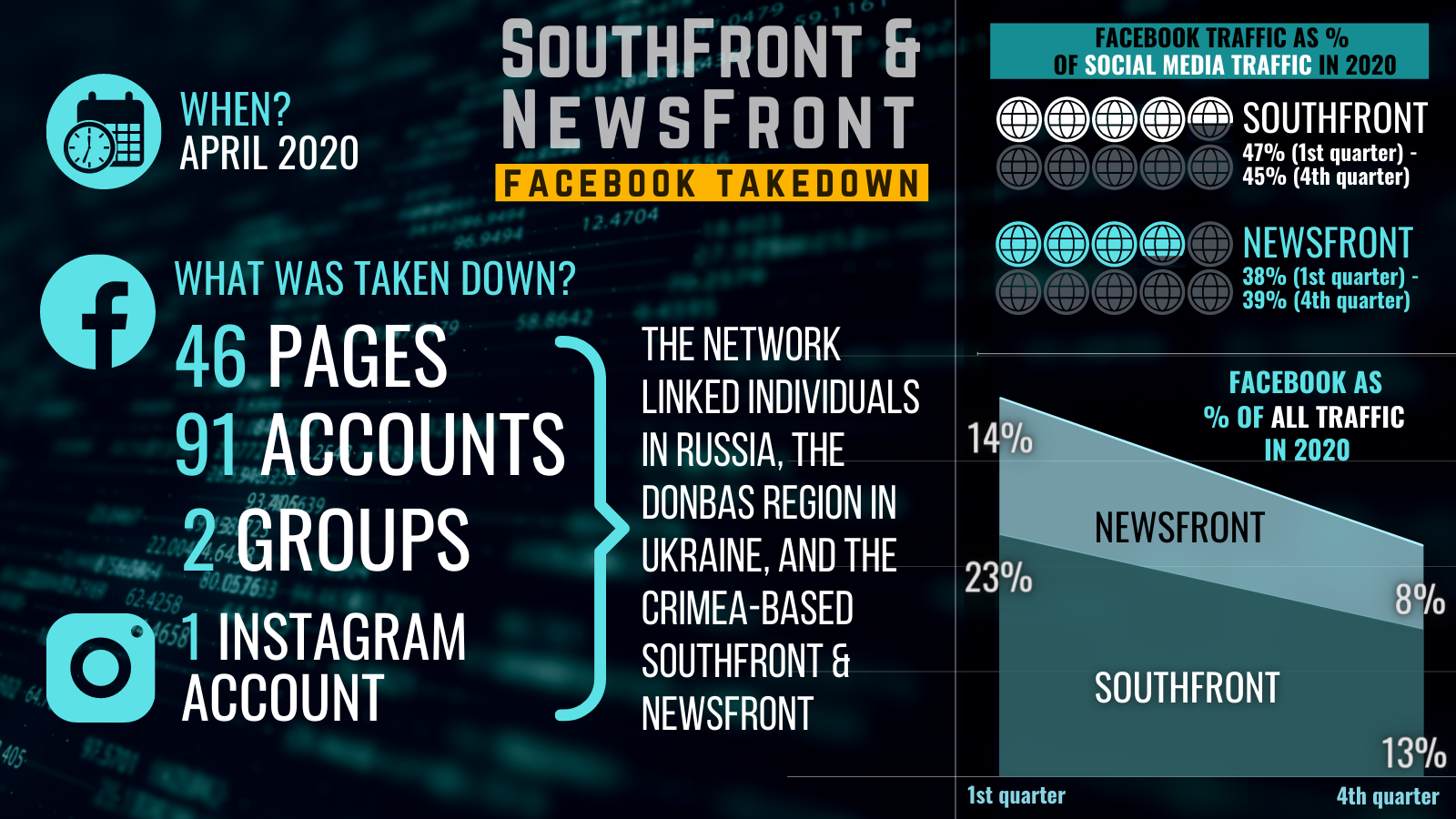