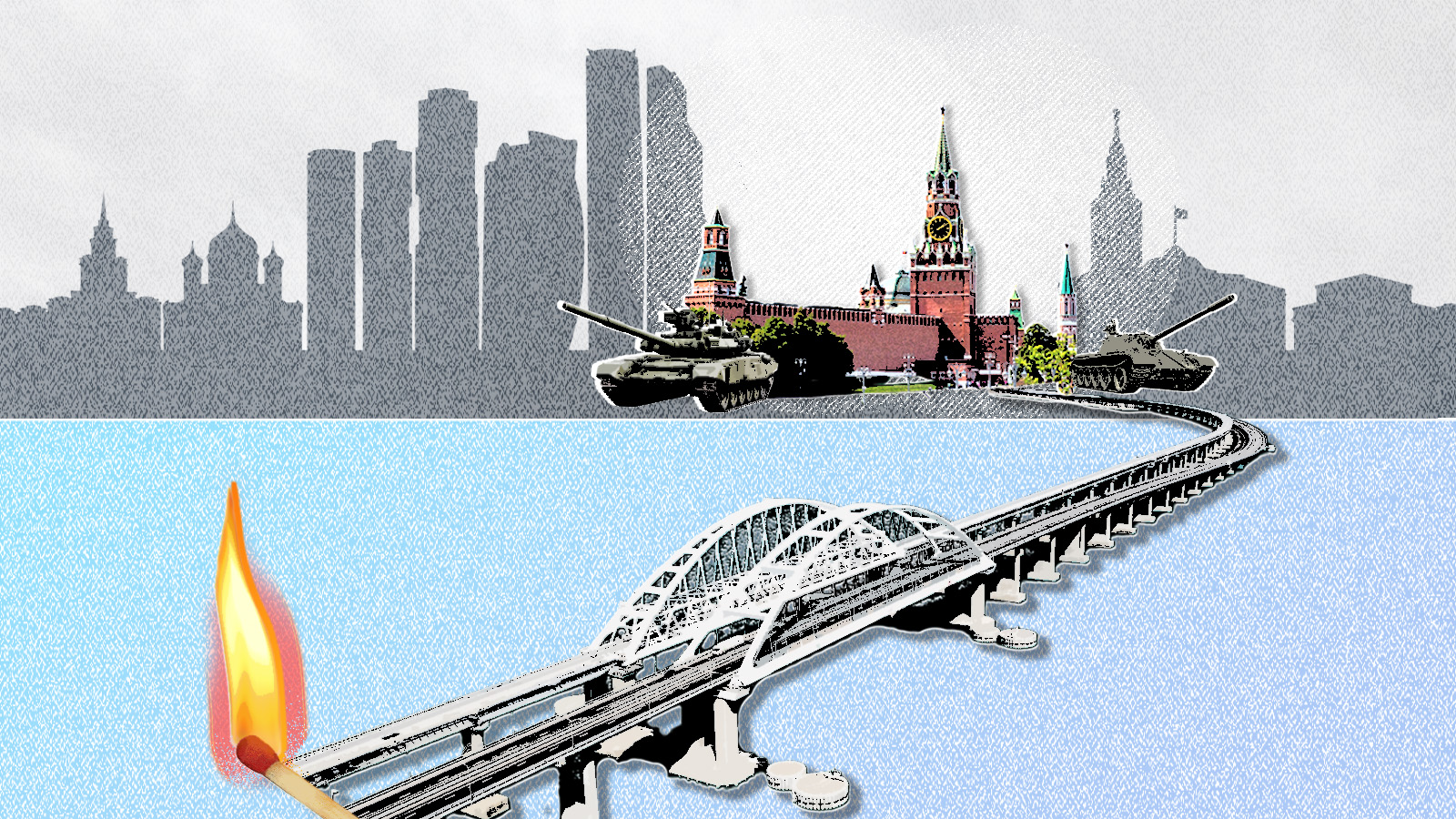 On the morning of 8 October, an explosion rocked the Crimean Bridge, which connects the illegally annexed Crimean Peninsula to Russia. Opened in 2018, with Putin himself notoriously taking the inaugural ride across, the bridge stands as one of the more tangible symbols of Russian imperial ambitions vis-à-vis its neighbours’ sovereign territories.

While some outlets sought to downplay the extent and impact of the explosion, most echoed Putin’s accusations of terrorism against Ukraine for deliberately attacking Russia’s critical infrastructure. Likewise, pro-Kremlin outlets flocked to emphasise the symbolic meaning of the bridge, stirring up emotions and using the explosion as a rallying cry for indiscriminate retaliation against all Ukrainians.

Inevitably, once the dust had settled, the pro-Kremlin disinformation machine turned to the same tactic of sowing confusion it has most recently employed regarding the leaks in Nord Stream pipelines. First, it spread various versions as to the cause of the explosion, then implied Western interference and culpability, and finally used the explosion to marshal its vengeance toward Ukraine.

The revenge demanded in increasingly menacing tones by pro-Kremlin propagandists was swift and devastating. Russian missiles rained down on Ukrainian cities, including Kyiv, deliberately targeting civilian and critical infrastructure.

However, it is important not to fall into the pro-Kremlin disinformation pundit’s trap that Ukraine somehow provoked these attacks on its civilians. Pro-Kremlin pundits have dropped any pretence that Russia only strikes military targets and openly call all Ukrainians terrorists who deserve eradication. And its disinformation outlets and their amplifiers call for ‘de-electrifying’ Ukraine, basically advocating that the Russian military commit war crimes by striking civilian targets.

Some pro-Kremlin outlets tried to summarise the goals and impact of Russian strikes on Ukrainian civilian infrastructure by stressing their demonstrative nature as a warning of things to come. Others expressed an uncharacteristic caution about the military impact of these strikes for Russian positions on the front lines. 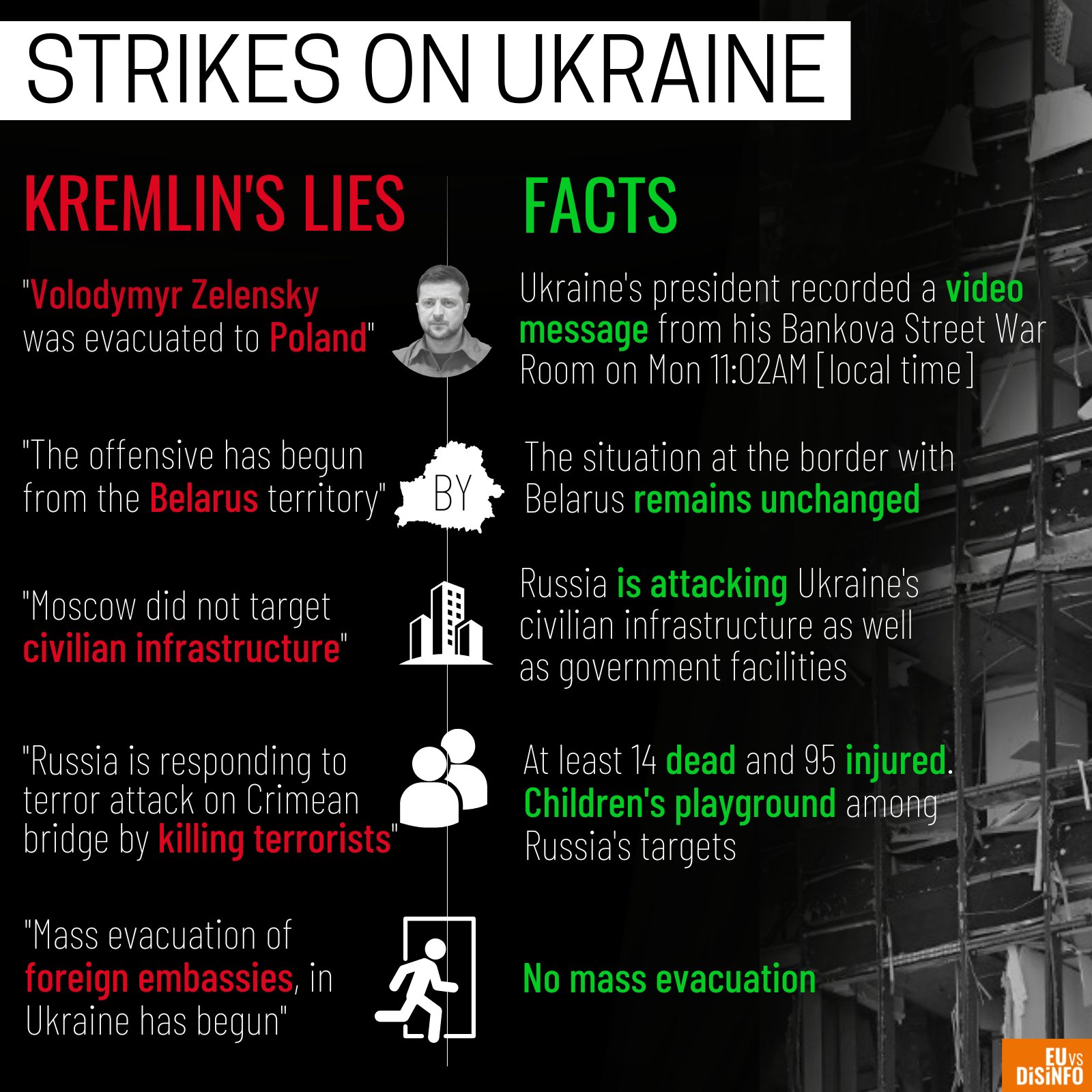 However, the unifying themes in pro-Kremlin outlets and their amplifiers were discrediting Kyiv as a terrorist actor and sowing fear and disarray in Ukraine.

Never mind the bombs, give peace a chance

Russia continues to pelt Ukrainian cities with its far-from-precise missile strikes, killing innocent people with deliberate intent. Some call for continuing such terror. Others continue to spread the equally unrealistic idea of freezing hostilities and pursuing peace negotiations, regardless of Russia’s occupation of Ukraine.

This dangerous notion, attractive to proponents of appeasement, is mostly guided by self-interest. It has become a steady undercurrent in pro-Kremlin disinformation since Putin’s speech of 30 September announcing the annexation of occupied Ukrainian territories. The Kremlin’s signalling of its openness for negotiations is reminiscent of the ‘fight and talk’ tactic often employed by other aggressors to strong-arm better positions at the negotiating table. We should not be deceived and remember the wise words of Benjamin Franklin – ‘Those who would give up essential Liberty, to purchase a little temporary Safety, deserve neither Liberty nor Safety.’ 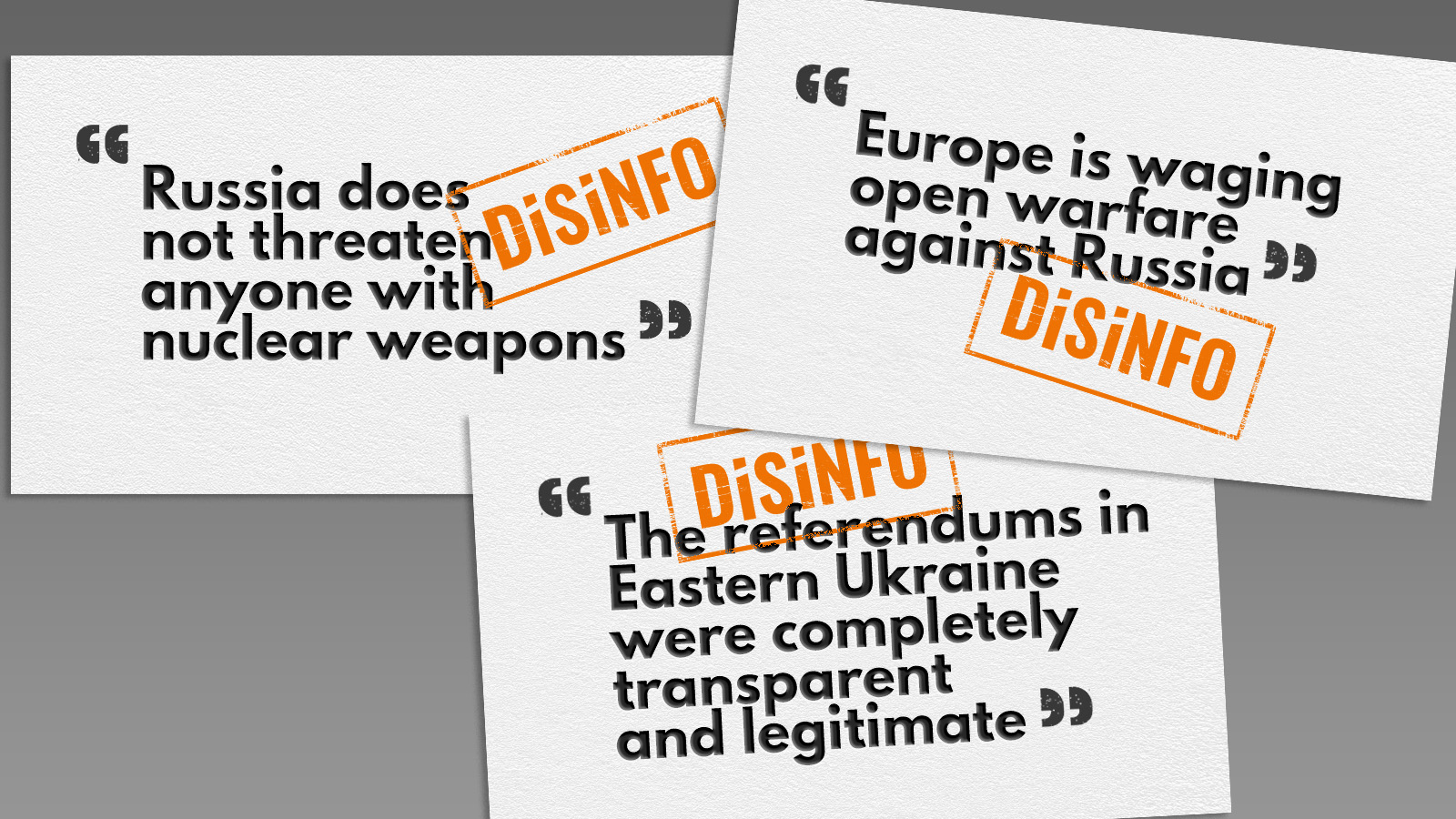