Nothing new - but no reason to relax 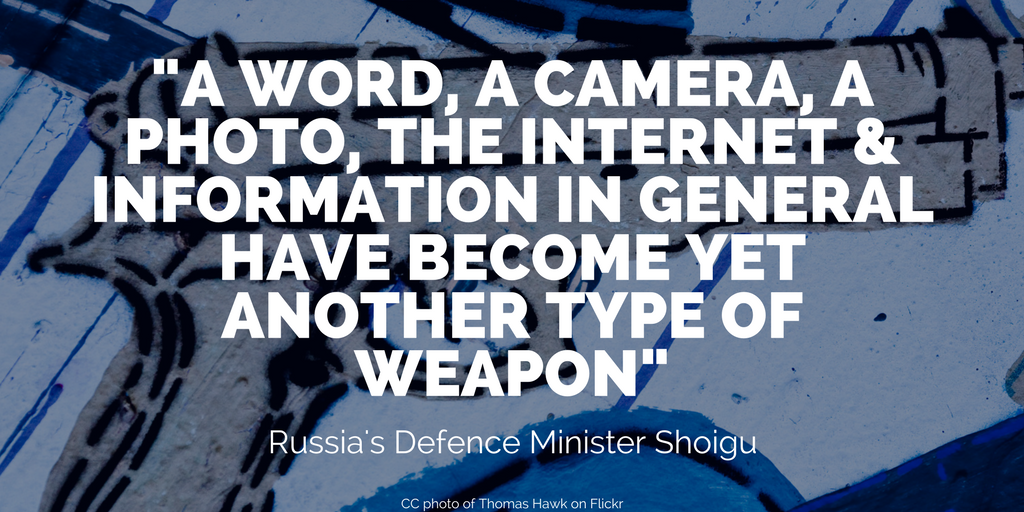 Russian authorities have decided to step up their efforts to control the flow of information and to counter misrepresentation of their country. This narrative has echoed around international media reporting over the last week. At a closer look, however, little of what has been reported is in fact news: Russia has been building up capacities to actively influence public opinion at home and abroad over a considerable period of time – and hasn’t done much to hide it.

The two news stories that featured in particular in international media last week were the Russian Foreign Ministry’s presentation of a website debunking myths on 23 February (see Foreign Policy) and comments voiced on the same day by Russian Defence Minister Sergey Shoigu. According to an article by Russian defence expert Pavel Felgengauer,”four years ago, Russia secretly created an ‘information warfare directorate’ within the ministry—in effect a new branch of the military that will be engaged in cyber warfare ‘counterpropaganda'”. (see Jamestown)

Expectations were high after Spokesperson Mariya Zakharova announced an anti-fake news website the previous week. However, the scope of the initiative left some degree of bewilderment among observers, such as blogger Alexei Kovalev, who expressed disappointment with the fact that all the new website offered was a red stamp saying “fake news”, covering five screenshots from reports in international media, which, according to the Russian Foreign Ministry, have included misinformation about Russia. “As you know, dear readers”, Kovalev commmented, “this is by no means the way a rebuttal is done according to modern standards. It is, however, more like the behaviour of Donald Trump yelling “fake news” at a CNN correspondent because he doesn’t like the news about himself on CNN”. Since then one short elaboration has appeared among the stories featured with the “fake news” red stamp on the Ministry’s website. So there is still work to do before the new initiative can be considered ground-breaking, as the Ministry in fact already had a website dedicated to rebuttals of allegedly incorrect reporting – but without the stamps.

The story that Russia has now militarised its information operations with a special unit working with “cyber warfare and ‘counterpropaganda'” was not really news, and the allegedly “secret” creation of the unit was in fact not that secret. For example, already in March 2012, Deputy Prime Minister Dmitry Rogozin mentioned “discussions about the creation of a cyber command” (see RIA Novosti). According to Shoigu’s comments, the fields of hostile cyber activities (hacking, phishing, etc.) and media (counterpropaganda) operations fall under the shared concept of “information warfare”.

The fundamental idea that information and media can and should be used as weapons is also not new in the language of Russian top officials. In 2013, General Valery Gerasimov, Chief of Russia’s General Staff, voiced what is considered a blueprint of Russia’s combined cyber and media operations with the claim that “information confrontation opens up wide possibilities for asymmetric reduction of the enemy’s combat potential” (VPK). Defence Minister Shoigu himself expressed similar views in March 2015, saying that “the day has come when we all have to admit that a word, a camera, a photo, the Internet, and information in general have become yet another type of weapons, yet another component of the armed forces”. (Interfax) The CEO of RIA Novosti and Sputnik, Dmitry Kiselev, is on the record for this translation of Gerasimov’s and Shoigu’s points into more popularised language: “If you can persuade a person, you don’t need to kill him.” (New York Times). Finally, similar ideas about both public and private media as “shareholders” in Russia’s national security are found in Russia’s new “Information Security Doctrine” (Disinformation Review).

Find out more about the use of information in military strategy in this monograph from the NATO Defence College.