Located in the far Western corner of the Baltic Sea, Denmark does not appear very often on the radar of the pro-Kremlin disinformation campaign. Last week, however, it did. In hindsight, the Russian state-controlled TV station NTV probably now regrets its decision to send a crew to film in Denmark because things did not work out quite as planned; at least not when NTV’s story, like a boomerang, had reached Danish audiences.

NTV’s news story told Russian audiences a tale about Denmark as a country allegedly obsessed by unfounded and “hysterical” fears of Russian aggression. NTV illustrated its attempt to ridicule the Danish nation with footage of Russian strategic bombers over the Baltic sea and dramatic music. 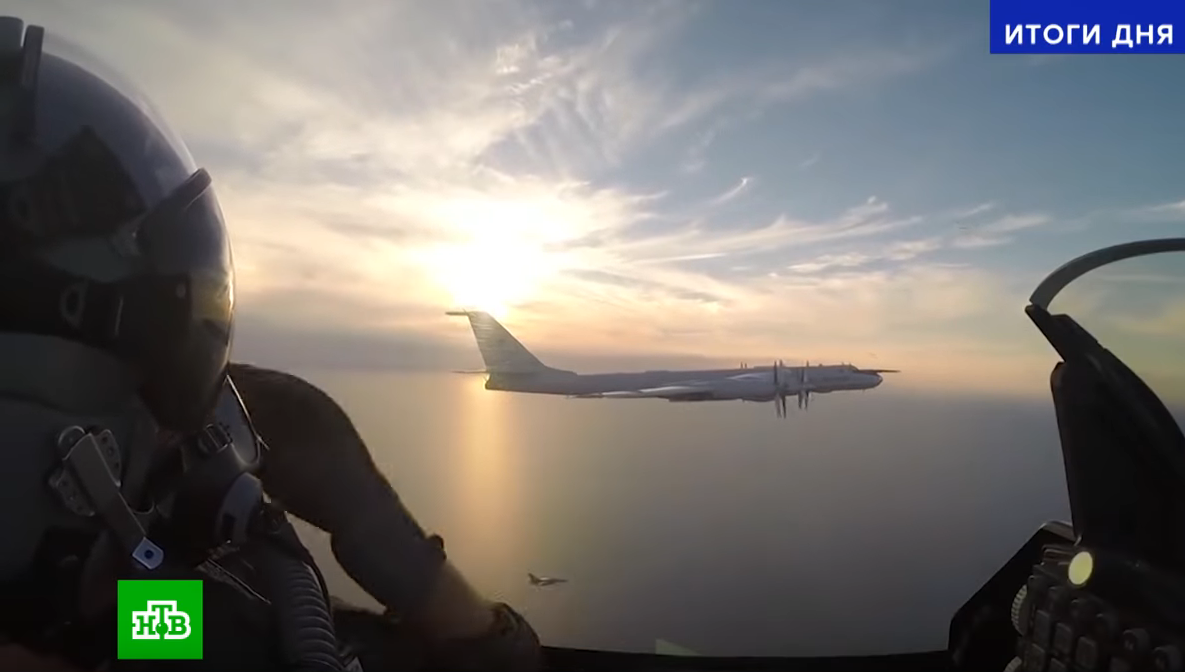 NTV illustrated what it described as “hysterical” Danish fears of Russian aggression with this T-95 strategic bomber being intercepted by NATO fighter jets.

NTV’s report had its main focus on a newly built military installation on the Danish island of Bornholm, which collects signal intelligence from the Baltic sea region. 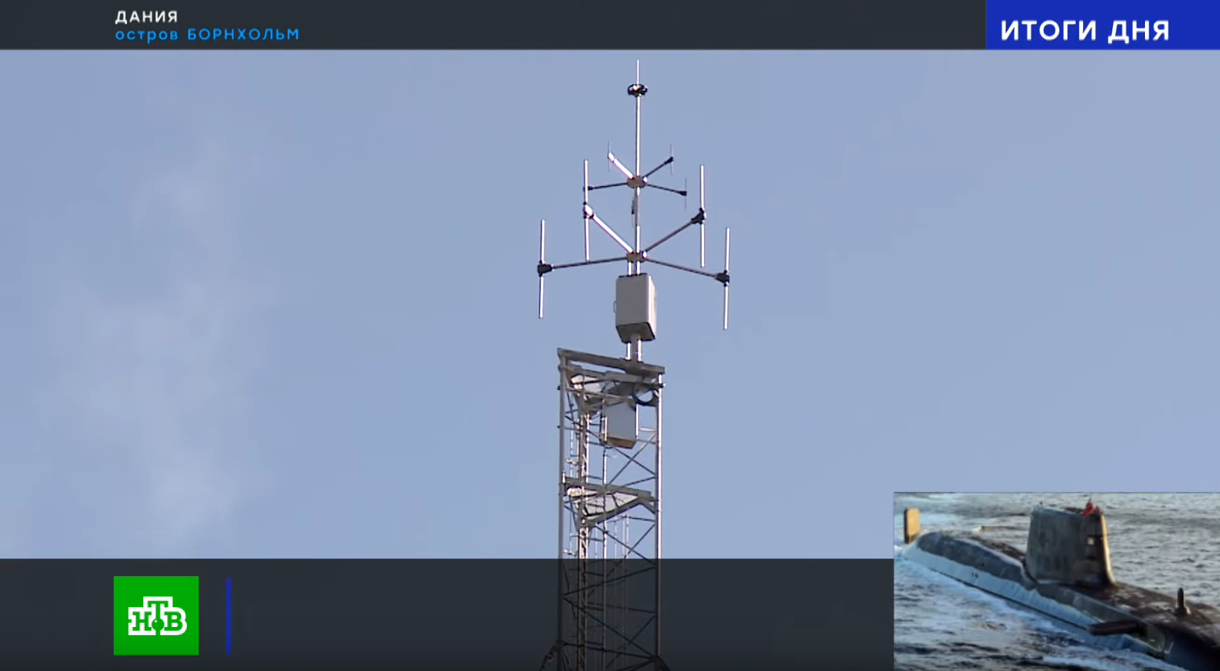 NTV travelled to the Danish island of Bornholm to inspect a newly erected radio mast used for gathering military signal intelligence from the Baltic sea region.

Journalists at the Danish radio station Radio24Syv, who watched the news item after it had been broadcast in an NTV news programme, smelled that something was not right with the interviews NTV had made with Danish politicians and local people on the island. Had NTV perhaps made use of the tradition on Russian TV of dubbing interviews in order to change what the interviewees had actually said?

Not unlike a similar incident in 2016 when French Canal Plus presented French people with the evidence that they had been mistranslated by Russian state TV Rossiya 24, the Danish radio station decided to gather reactions from the Danish interviewees in NTV’s production after they had been allowed to see how their statements had been rendered in Russian. 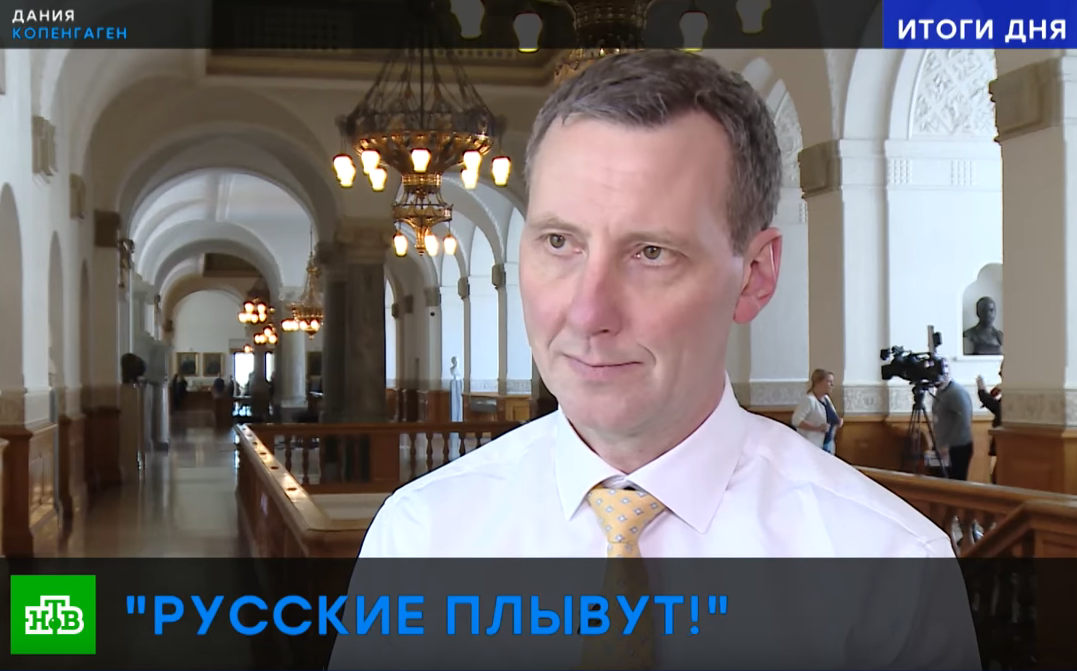 “My statement in the Russian version of the programme does not correspond with the statement I gave them. I’m left with a feeling of fake news, misuse and maybe even a deliberately wrong translation”, MP Nick Hækkerup, a former Defence Minister, told Radio24Syv. 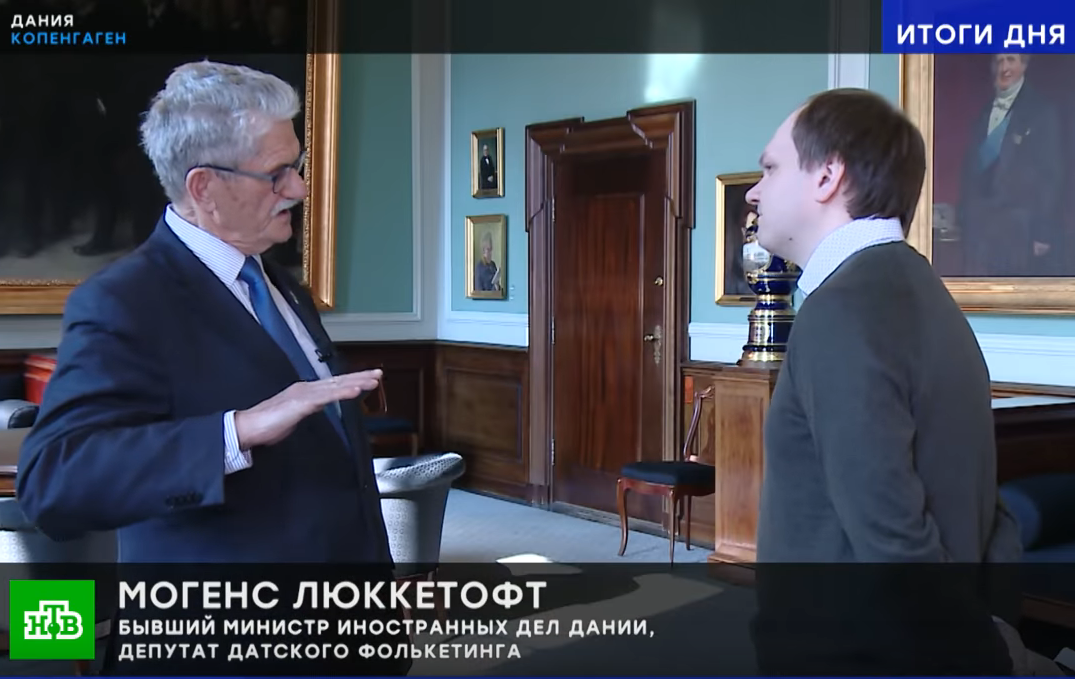 “The programme is one big manipulation filled with lies. The interview took place under the condition that our quotes were to be used in a meaningful way and our statements be clearly explained. This did not happen. The Russian audience clearly are not being allowed to know why we are scared of Putin’s aggressive and unpredictable politics”, MP Mogens Lykketoft, former Minister of Foreign Affairs and former President of the UN General Assembly, told Radio24Syv. 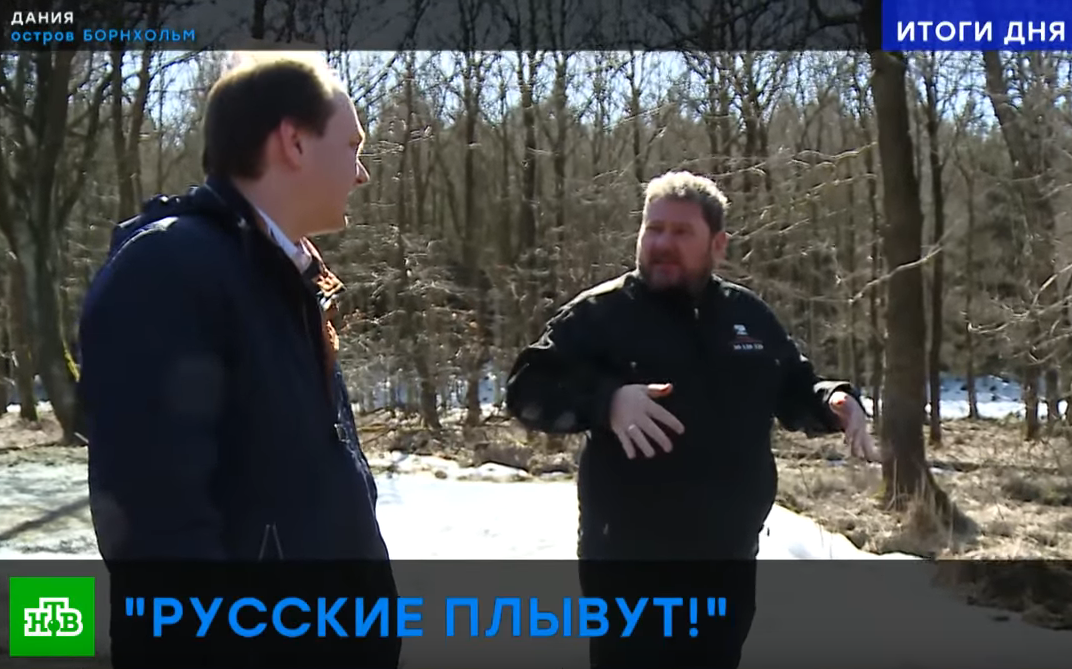 “I can tell from the translation that I have been quoted saying things I have never said, that’s for certain. They’re welcome to come back here so we can talk about it”, Michael Møller, a local museum owner on the island of Bornholm, told Radio24Syv.

Facing potential face loss for one of Russia’s largest media outlets, the Russian Embassy in Copenhagen decided to opt for a rebuttal: the two MPs and former ministers, the embassy explained on Twitter, had in fact never appeared in on NTV!

The journalist behind the story, Tinne Hjersing Knudsen, replied with screenshots from NTV showing the interviews with the politicians, asking if NTV had perhaps interviewed their identical twins? 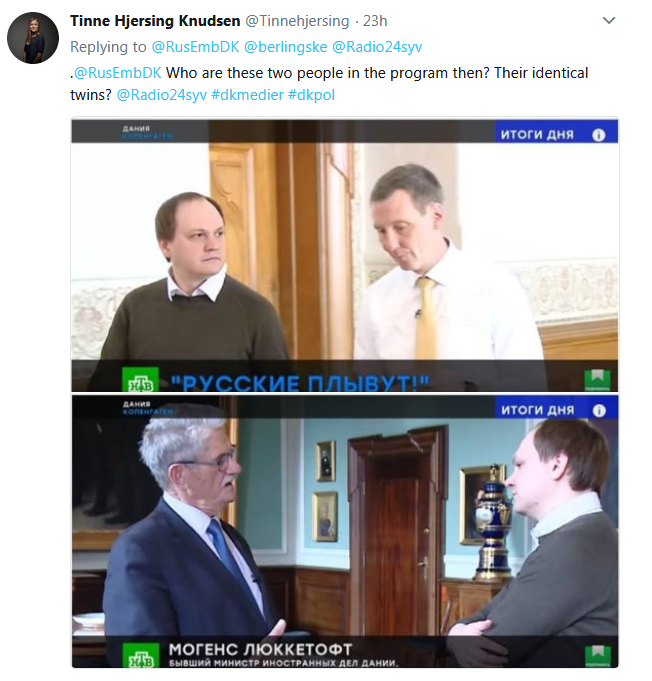 Apparently, the Russian embassy had managed to find an alternative version of NTVs news story where the two Danish politicians had suddenly – and conveniently for NTV’s reputation – been edited out of the production.

In other words, the Russian embassy’s attempt to create a smokescreen in order to confuse Danish audiences, ended up adding backfire on top of the already rather serious backfire created by the doctored interview translations. Radio24Syv’s story had broken on Monday morning. No wonder that, by the time Danish TV2 contacted the embassy for the evening news programme, it refused to give any further comment to the case.

“Putin has a microchip implanted in his shoulder”