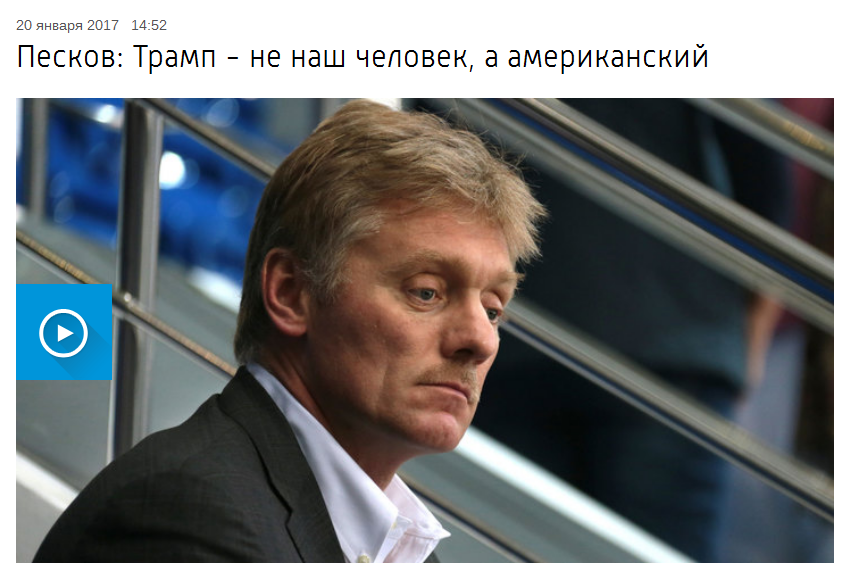 “Trump is Russia’s man!” This claim has become common enough in both Russian and international media for President Putin’s spokesperson, Dmitry Peskov, to comment on it when he appeared on a Saturday night talk show on the state TV channel Rossiya-1. Mr. Peskov seemed to enjoy discussing if President Trump is indeed Russia’s man, even if he stated the obvious, namely: “It isn’t our man. It’s America’s man – the President of the United States”.

Russian government communications towards the West is by definition disruptive rather than constructive, and creating confusion provides much more leverage than offering commitment, as the East Stratcom Task Force concluded in the commentary on the successful pro-Kremlin disinformation campaign published recently.

Messages relayed by the Russian Government’s two official international outlets, Russia Today (RT) and Sputnik, indicate that – outside Russia – the position of pro-Kremlin media to President Trump is not as clear-cut as it used to be. After the predominantly positive coverage of President Trump’s inauguration, an analysis of last week’s coverage suggests that sceptical narratives towards President Trump are now more frequent than before his election (see our analysis of Sputnik’s coverage during the US election campaign).

Last Saturday, Russia Today (RT) published an article with the headline “Petition demanding the release of Donald Trump’s tax returns secures 100k signatures”, in which the outlet reminded its audience that “the newly sworn-in president shunned tradition by refusing to release his tax returns during the election. Similarly, Sputnik ran a story with a clear appeal to left-wing criticism of President Trump in the headline “America Inc.: How Trump’s New Cabinet Will Turn US Into a ‘Large Corporation’”. Sputnik also covered the plans for further protests against President Trump, which fits well with Sputnik’s tendency to (announce and) dwell on catastrophes and disorder of all sorts. Sputnik even features a radio podcast entitled “How Trump uses the fascist playbook“. While this particular podcast turned out to be not very popular, allegations of fascism should be taken seriously: they have very negative connotations in pro-Kremlin disinformation and are widely used to qualify states and politicians that disagree with Russian policies.

One thing is clear: Pro-Kremlin media have identified the long-term infotainment value in the ups and the downs of this relationship. For further food for thought on the topic, readers can look at this commentary by Russian-American author and acclaimed Putin biographer Masha Gessen, published on Tuesday by the New York Review of Books. (Image: Vesti.ru)