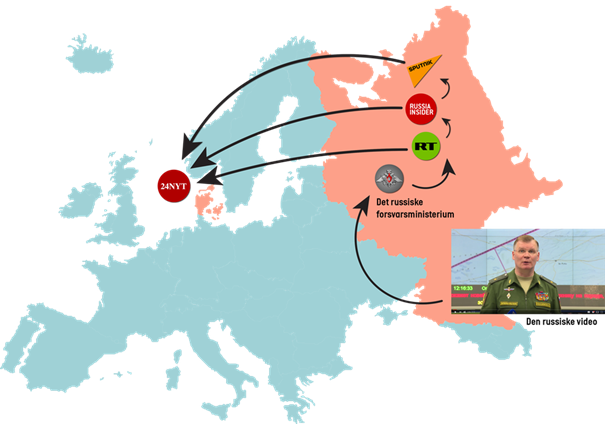 Just like other EU countries, Denmark has had its fair share of pro-Kremlin disinformation. It has for example been depicted as a country with food shortages and poor hygiene standards. Now an investigative article entitled “Focus on the information war: This is how Russia’s agenda spreads in Denmark” by the Danish online magazine Zetland provides more details on how pro-Kremlin disinformation migrates into Danish debates.

Zetland’s article includes a number of case studies. One of them demonstrates how pro-Kremlin disinformation about the gas attack in Idlib of April 2017 was uncritically relayed by an online resource called 24nyt, which Zetland termed “a new right wing outlet” (see also Zetland’s infographic below). Zetland also documents how two of the biggest Danish newspapers promoted videos produced by Russia Today and the Russian Ministry of Defence’s TV Zvezda without acknowledging their source. In the article, Zetland confronts the editors of these two media on this; both acknowledge that they ought to have made it clear that these videos came from Russian state media.

A relevant background document for Zetland’s findings is the Annual Risk Assessment published by the Danish Defence Intelligence, which underscores that “Russia uses a wide range of instruments, including information campaigns through Russian state-controlled media targeting Western audiences; dissemination of partially false and biased information through Russian think tanks, research institutes, official news outlets, bloggers, and commentators who pretend to be independent” and that “Russia will remain a significant security policy challenge to the West, including Denmark”.

On a similar note, the Danish Minister of Defence recently attracted international attention by complaining of Russian hacking of Danish military email accounts. “This is part of a continuing war from the Russian side in this field, where we are seeing a very aggressive Russia,” Defence Minister Claus Hjort Frederiksen said, as reported in the New York Times. In an interview with Danish daily Politiken, Flemming Splidsboel Hansen, a senior Russia expert from the Danish Institute for International Studies, said that Russian policy in the area of disinformation and cyber-attacks is shaped by the idea that “Russia is at war with the West. [They] do not know when the war began, but what [they] can say with certainty is that it never ends”. Hansen concludes on a pessimistic note: “I used to say that I was not so worried, but I actually changed my mind. The fact that you get away with saying something that you know is wrong is to me really stepping onto a slippery slope. It has become worse in the last years – and it is not just because of Russia. It’s simply because it has also come become a part of mainstream Western politics and Western media”.

Danish online magazine Zetland’s infographic illustrates how a video with misleading claims made by the Russian Ministry of Defence about the chemical attack in Idlib migrated via pro-Kremlin outlets RT, Sputnik and Russia Insider, until it was uncritically relayed by the Danish online outlet 24nyt. (Image: Zetland.dk)