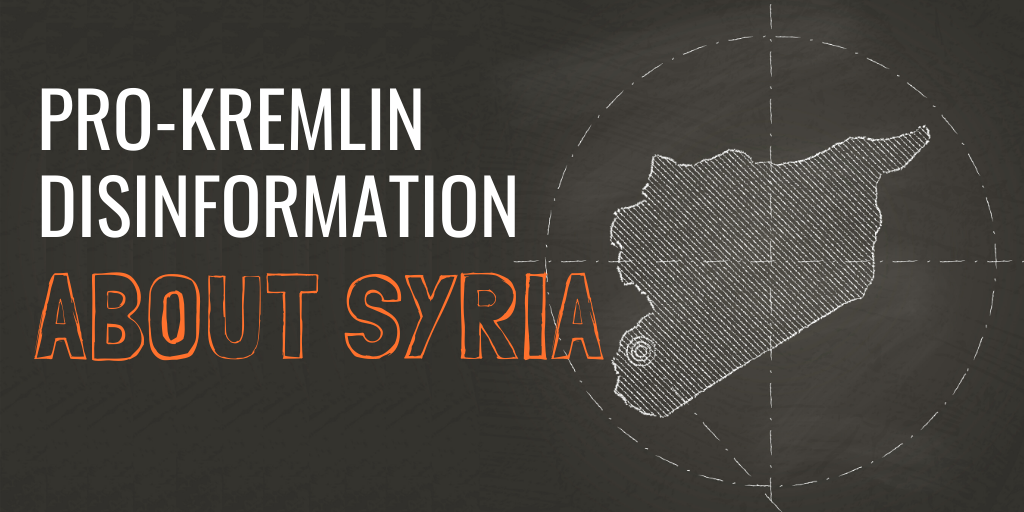 Disinformation Ignores Responsibilities of Russia and its Allies, Scapegoats the EU

EU sanctions on Syria have been a favourite target of disinformation from Russia and pro-Kremlin media to discredit the EU’s action in and policy towards Syria. This week we devote the Disinformation Review largely to disinformation on Syria, EU policies and the sanctions regime.

Lately, Russian officials and pro-Kremlin media in Arabic exploited the political and medical background to further advance their recurring disinformation claims against the EU.

This has become manifest with disinformation peaks around three critical moments: the emergence of the COVID-19 crisis; the renewal of EU sanctions against the Syrian regime on May 28th; and around the Brussels IV Conference on supporting the future of Syria and the region.

The attacks have crystallised along the following lines:

Below is our analysis putting in perspective the latest pro-Kremlin disinformation narratives around the EU’s sanctions and action in Syria.

Disinfo: EU is waging an economic war on Syria and the Syrian people

The Syrian regime and its allies have launched this recurring narrative since the start of the conflict and the imposition of EU sanctions as early as 2011.

The narrative has been persistent, but never really picked compared to other more famous disinformation narratives around chemical attacks or support to terrorism. This is mostly because EU sanctions have never sought to prevent legitimate trade with Syria: at any point during the past nine years, Syrians could find EU products in supermarket and pharmacies.

Recently, however, the combined effects of the economic crisis in Lebanon, the mismanagement of the economy by the Syrian regime and the COVID-19 crisis have resulted in shortages of food inside Syria, providing a platform for this narrative to re-emerge. The renewal of EU sanctions against the Syrian regime on 28th May provided EU critics with an opportunity to further advance this narrative with adverse claims, such as “EU sanctions are asphyxiating the Syrian people” or “the US and its European allies wage a fierce economic war against the Syrian people.”

Such claims are aiming at deflecting the blame of the dire economic situation in Syria, which is the result of the Syrian regime’s mismanagement of the economy with corruption and personal interest taking priority before the interests of the Syrian people.

Let be clear: there is no economic war on Syria or the Syrian people. EU sanctions have been imposed since 9 May 2011 to respond  to  the repression  perpetrated  on  the  Syrian  people by  the  Syrian  regime  and its supporters. They are targeted at individuals and entities that have been supporting the regime’s atrocities on the Syrian people or who have been profiting from the war economy. EU sanctions are built to minimise negative impact on ordinary Syrians: all necessary humanitarian derogations are built in and routinely granted to humanitarian actors by competent national authorities.

Read more here and here on how EU sanctions are avoiding a negative impact on the Syrian population. 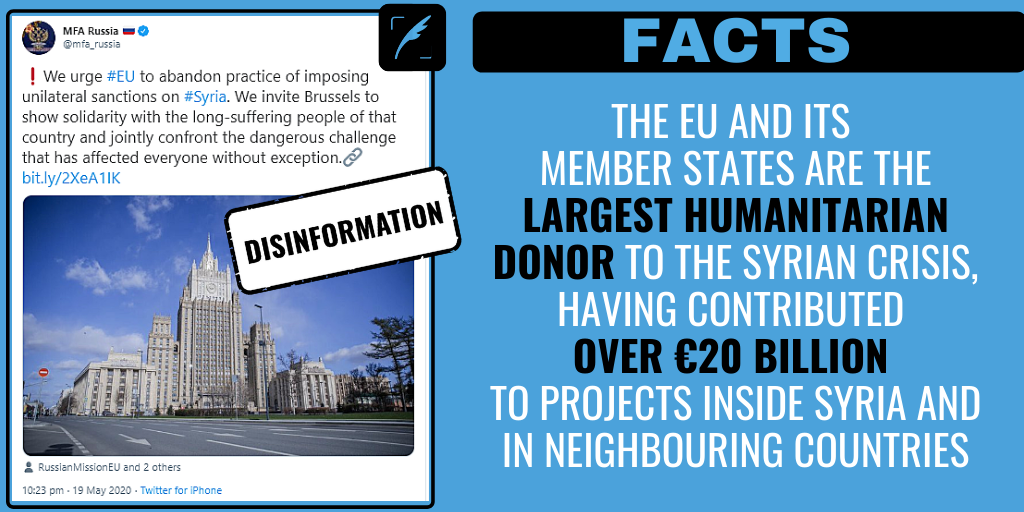 Within the context of the Covid-19 crisis, Russian officials and pro-Kremlin media have exploited the pandemic to further advance the disinformation narrative against EU sanctions, with the claim that EU sanctions are undermining Syria’s efforts to fight Covid-19 and crippling the medical sector.

Again, EU sanctions are wrongfully blamed. The European Commission published a guidance note on EU sanctions in Syria clarifying once again how Coronavirus-related humanitarian aid can be sent to Syria. The note explains that EU sanctions do not concern medicines, medical equipment or medical assistance provided to the population at large, and they do not prohibit the export to Syria of respirators, disinfectants, hand sanitizers or detergents used to respond to Covid-19.

What is interesting to highlight is the tone and the reaction at an official level following the publication of this note, with Russia’s MFA criticising at length the provisions as political ‘instructions’ designed to “avoid providing humanitarian aid to the Syrians” and to “portray the EU sanctions as humane.”

Russia’s MFA adopted the same tone accusing the EU of not standing by the Syrian people when the EU sanctions against the Syrian regime were renewed on 28 May. In a tweet, Russia called on the EU to lift its sanctions on Syria to show solidarity with the long-suffering Syrian people: “We invite Brussels to show solidarity with the long-suffering people of [Syria].”

Contrary to what was alleged, the EU and its Member States are the largest humanitarian donor to the Syrian crisis, having contributed over €20 billion to projects inside Syria and in neighbouring countries.

To put that in context, two-thirds of the money spent since 2011 to help Syrians, inside and outside the country, comes from Europe. That money has been delivering humanitarian, stabilisation and resilience assistance, including medical aid. In 2019 alone, 10 million people inside Syria benefitted from EU funded primary healthcare.

Only a few days ago, the EU hosted the Brussels IV Conference on “Supporting the future of Syria and the Region”, co-chaired with the UN. The Conference gathered virtually around 80 delegations who collectively pledged a total of €6.9 billion, of which €4.9 billion for 2020, and €2 billion in multi-year pledges for 2021 and beyond. Three quarters of the pledges came from the EU and Member States.

Disinfo: EU is subordinate to the US and supports terrorism in Syria

The entry into force of the Caesar Act by the US on June 17 – three weeks after the renewal of EU sanctions – provided pro-Kremlin EU critics with an opportunity to further advance the recurring claim of the EU’s subordination to the US alleging that the timing is an indication of the West’s conspiracy against Syria.

In this vein, pro-Kremlin media are casting doubt on the EU’s independence with claims such as “EU politics have always been subordinate to American policy” or “Europe is subject to strong pressure from Washington.”

This is part of a wider recurring narrative accusing the EU of collaborating with the US by supporting terrorists in Syria. Contrary to such conspiracy theory aimed to legitimise the Syrian regime, the EU has consistently affirmed its commitment to the unity, sovereignty, territorial integrity and independence of the Syrian State, as outlined in the EU Strategy for Syria.

See earlier disinformation cases alleging that Europe is occupied by the US and has limited sovereignty, and that the EU is directed by Washington.

A few of the other examples of disinformation this week: